There’s a thread about STA on Fantasy Grounds on this forum, a thread about a Foundry VTT implementation, as well as a rather general thread about VTT options for STA. There’s probably more, just use the forum’s search engine with strings like “vtt” and/or “online play” or something like that.

There’s a vast VTT Content Repository driven by @Phounix right over here. You might also want to look at this this thread about Starfleet Style Message Templates. You should also be aware of the Online Character Generator as well as the Miniature Maker.

Jim also put a video up on YouTube a while back about how he sets up his Roll20 game. Don’t have a link to hand, but might be worth a look

We use Roll20 for STA and it works well. I added a challenge dice macro and the character sheets handle everything well.

Is there any news that can be provided about the state of the Fantasy Grounds version of the STA rule set?

The folks Modiphius have allowed to develop this are just terrible at communication, post screenshots of the work that they’re doing, and don’t answer questions on their forums for months at a time. It makes both them and Modiphius look bad, and I love Modiphius’ games.

The Conan ruleset they’ve produced is a mess. It barely has basic functionality. Note - I don’t care about automation - but considering they charge $50 bucks for a rule set that doesn’t have any artwork and does not play well with FGU, and has a useless combat tracker is anathema to me.

The developers at Nerd Eye Industries have list of all these Modiphius games they’re working on, but nothing seems to be coming to fruition. An update on the state of things about STA, DUNE, CONAN etc. would be greatly appreciated.

I second this. My group uses Roll20. The character sheet works well and I have built a couple of macros and rollable tables making things run even smoother.
My players seem to enjoy it.

The group I’m playing with all play via zoom call every other weds night (streamed live too go check us out!) Works well and we all have a great time playing (usually badly!) 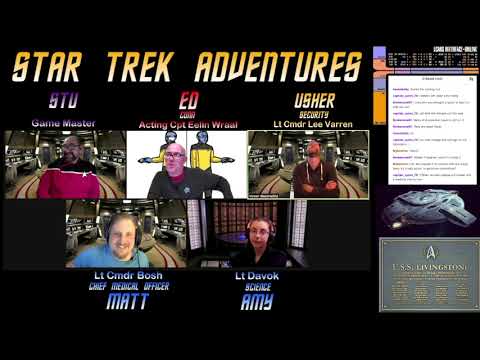 My group uses Discord and Owlbear Rodeo for moving their characters around on battle maps which works great. You’re welcome to join, just let me know.

Owlbear Rodeo is an awesome tool. Does everything I need (I don’t need automated character sheets, etc.).

I’ve bee waiting for STA for over a year and a half. Its frustrating because there are 3 entities connected with this, Smite Works, Modiphius and Nerdeye. They tend to point the finger at each other for the delay, or say its not a delay, just how things go with Programming Projects. In any case, its near impossible to get word on the current status of the product. I chose Fantasy grounds because there was a community written rules set and the idea that there was an official and backed version coming, which at the time seemed imminent. 18 months later still nothing. During this lag, the community built rules set has stopped any sort of updates. Really frustrating.

No one in my group has time for a traditional game session, so we’re doing play-by-post on Discord. Using Majel bot for dice, and I’m using Tupperbox bot for custom avatars to represent NPCs in dialog or narration in different settings. Our battle maps are screenshots of game maps marked up in a layered sketchbook app and posted right into the RP thread. Categorizing chatter into channels keeps things easy to find. Published rules work remarkably well in this format right out of the box.

what are the settimgs you use for this zoom call it looks amazing?