Last Saturday was board game night and we finally broke out Fallout again. Been a while and in the meantime the Raiders came out and the updated settlement sheet was revealed. The former was reason enough to have them in the game, the latter meant we updated our settlement before the game, dropping some items and buildings to get more land and a few lockers. (We replaced things at full value, treating it like we had started out on the updated settlement sheet to begin with.)

I set up a scenario of my own making, where our settlement’s Survivors (played by Dieter and Daniel) got word of an old military facility that still had functioning turrets and robots guarding it, so there was a promise of lots of loot for whoever got there first. I played a group of Raiders who heard the same thing and were on their way to have a look, too.

The Raiders (805 caps)
1 Veteran Rider (Heroic) with Raider Power Armor, Junk Jet, Sledgehammer, Overdrive and Bruiser
1 Scavver with Double-Barrel Shotgun
1 Dog with Dog Bite
3 Psychos with a Lead Pipe each
4 Raiders, three of them with Pipe Rifles, the fourth with an Assault Rifle 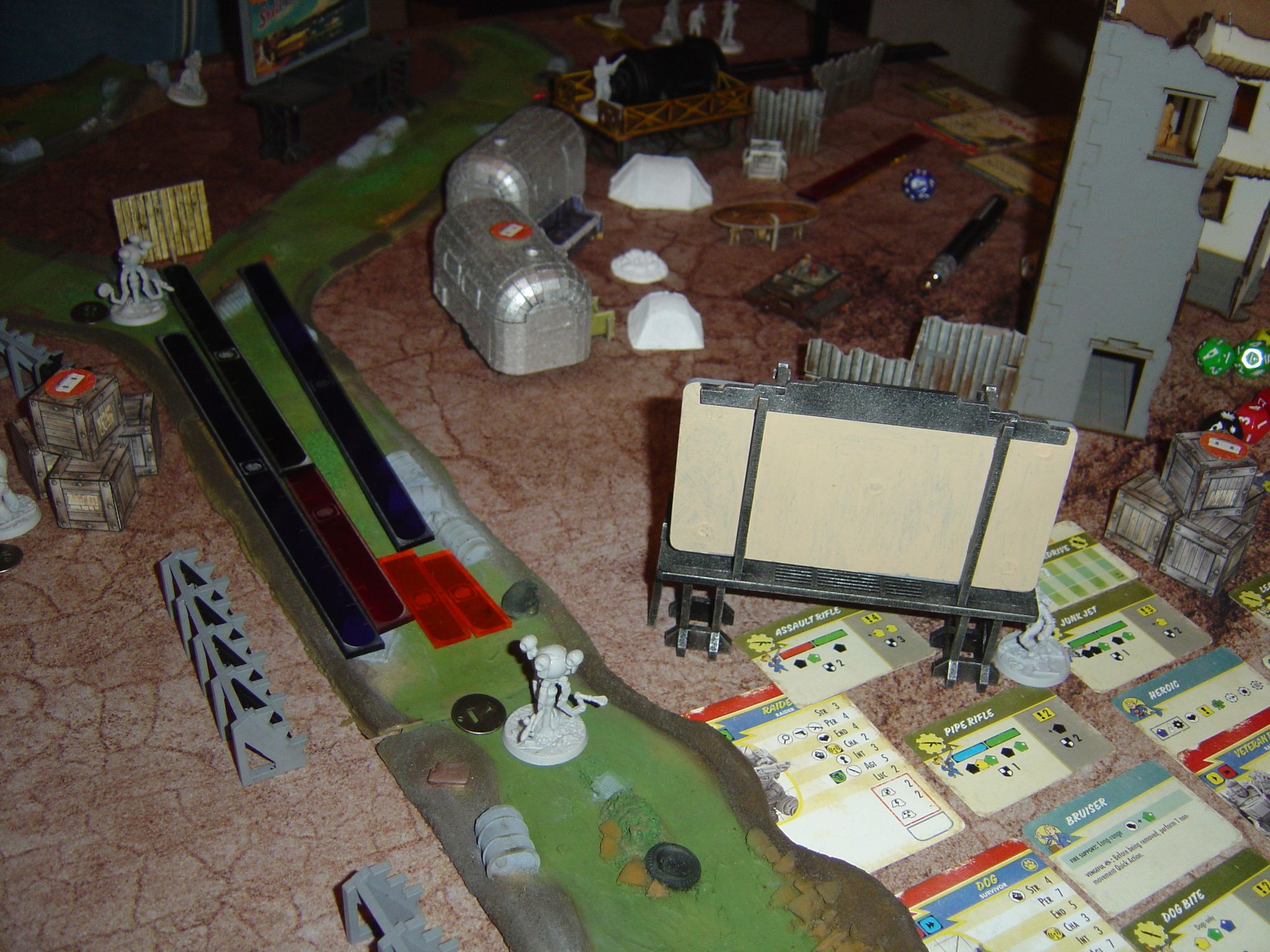 The Raiders had the faster approach, but also less cover and there was a surprisingly undamaged sentry bot patrolling the road on the far side of the small river. 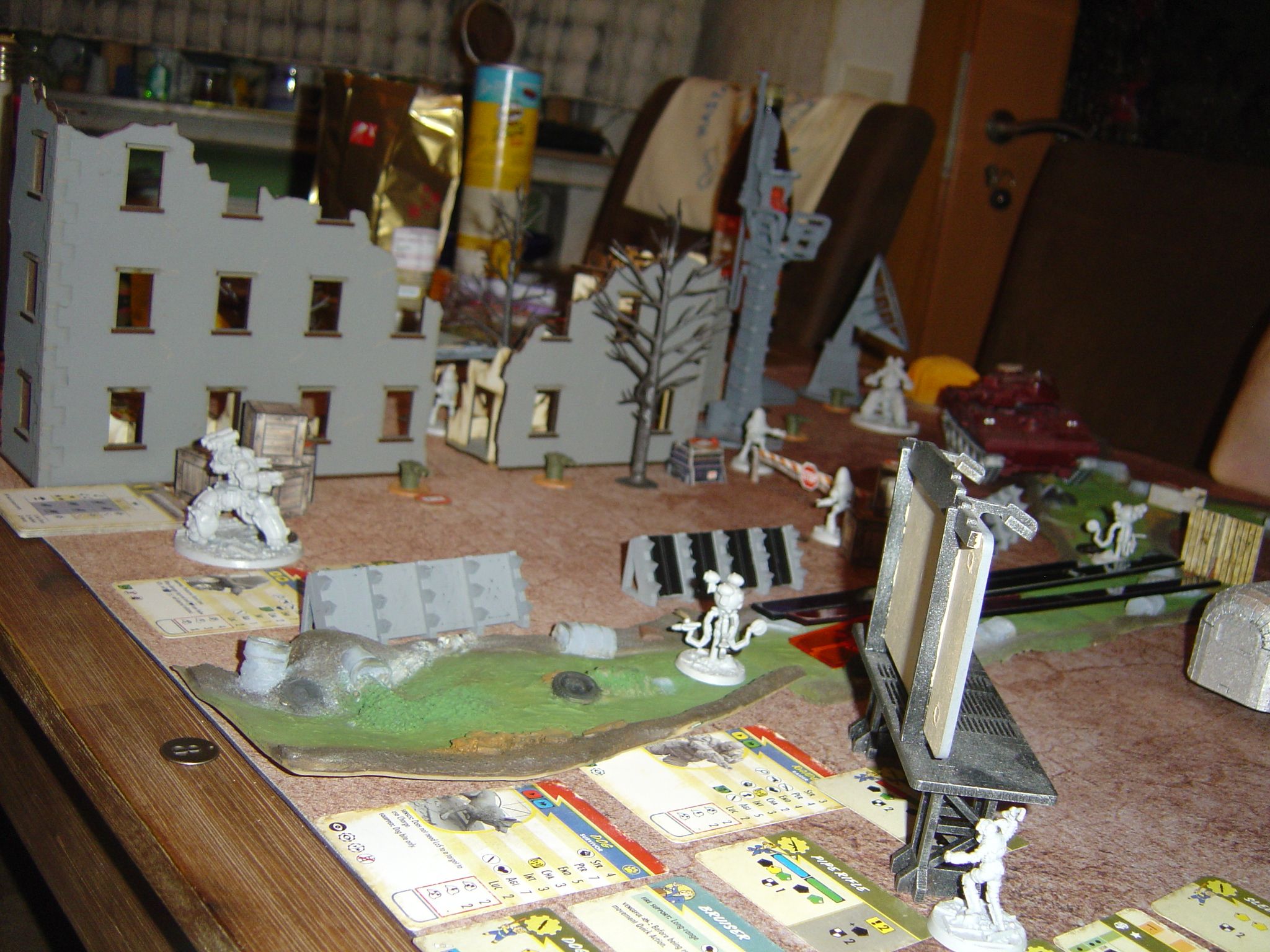 So the Raiders got into position, waiting for the Mr. Handy patrolling the river itself to move off. Meanwhile, the Survivors on the other side of the camp site made their way forward, taking advantage of all the cover they could get. 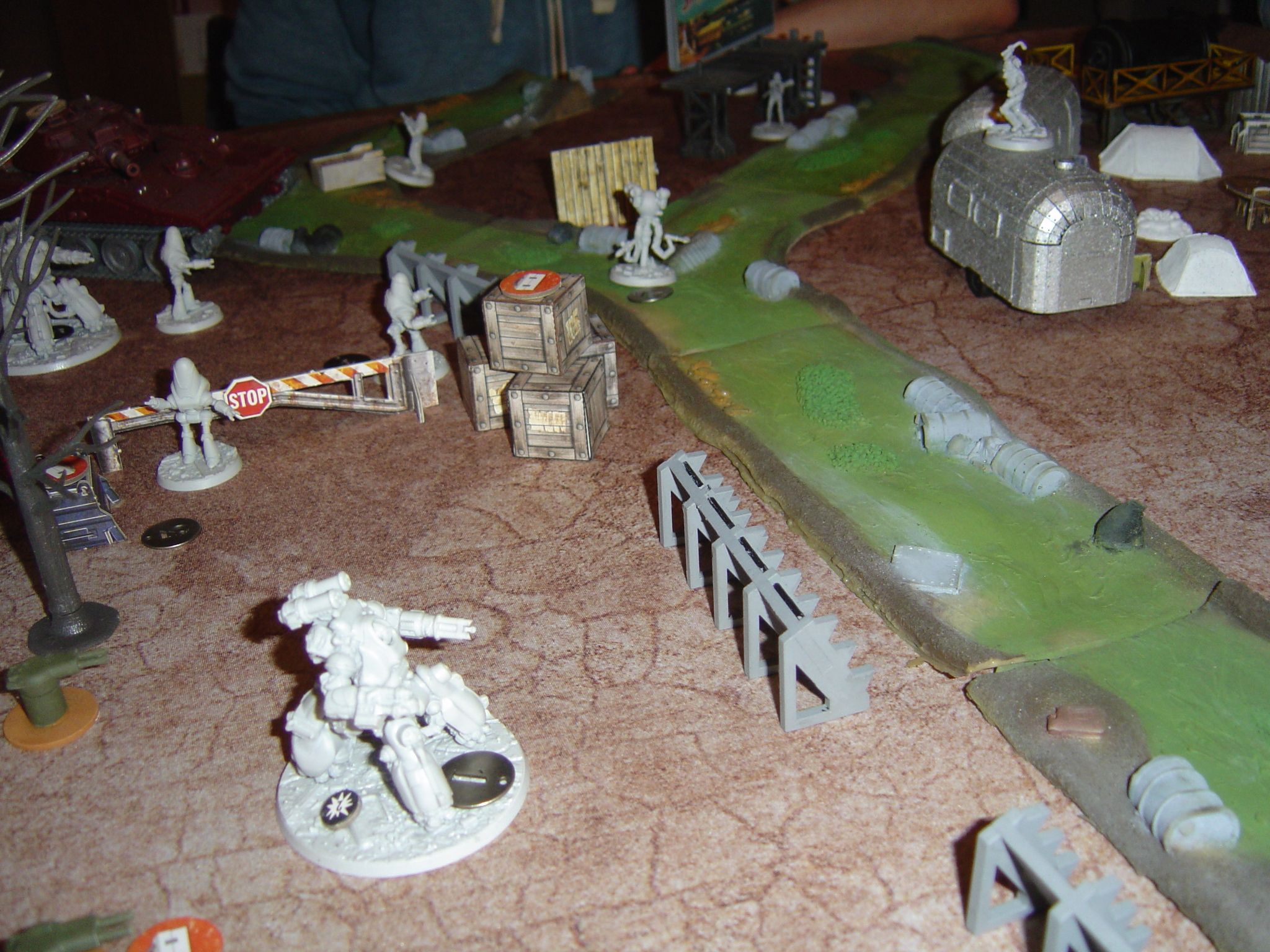 And then all Hell broke loose, which the Raiders opening fire on the sentry bot, the Survivors taking out a Mr. Handy and the robots and turrets entering defense mode and actively seeking targets.
The Raiders took the brunt of the first salvo, with the undamaged sentry bot taking out 2 of their number in a single activation.
The survivors fared a fair bit better thanks to better cover and the fact that the sentry bot on their flank was already battered up a fair bit. That’s not to say they didn’t take a few hits, but their armor tokens caught most of that.
Still, seeing how the robots put up a solid defense, Daniel and Dieter decided to send over one of their settlers to call a truce between the Survivors and the Raiders. Since neither side had yet fired a shot at the other, I had no objection, thus turning the scenario from a three-way fight into more of a race to see who could grab more loot. 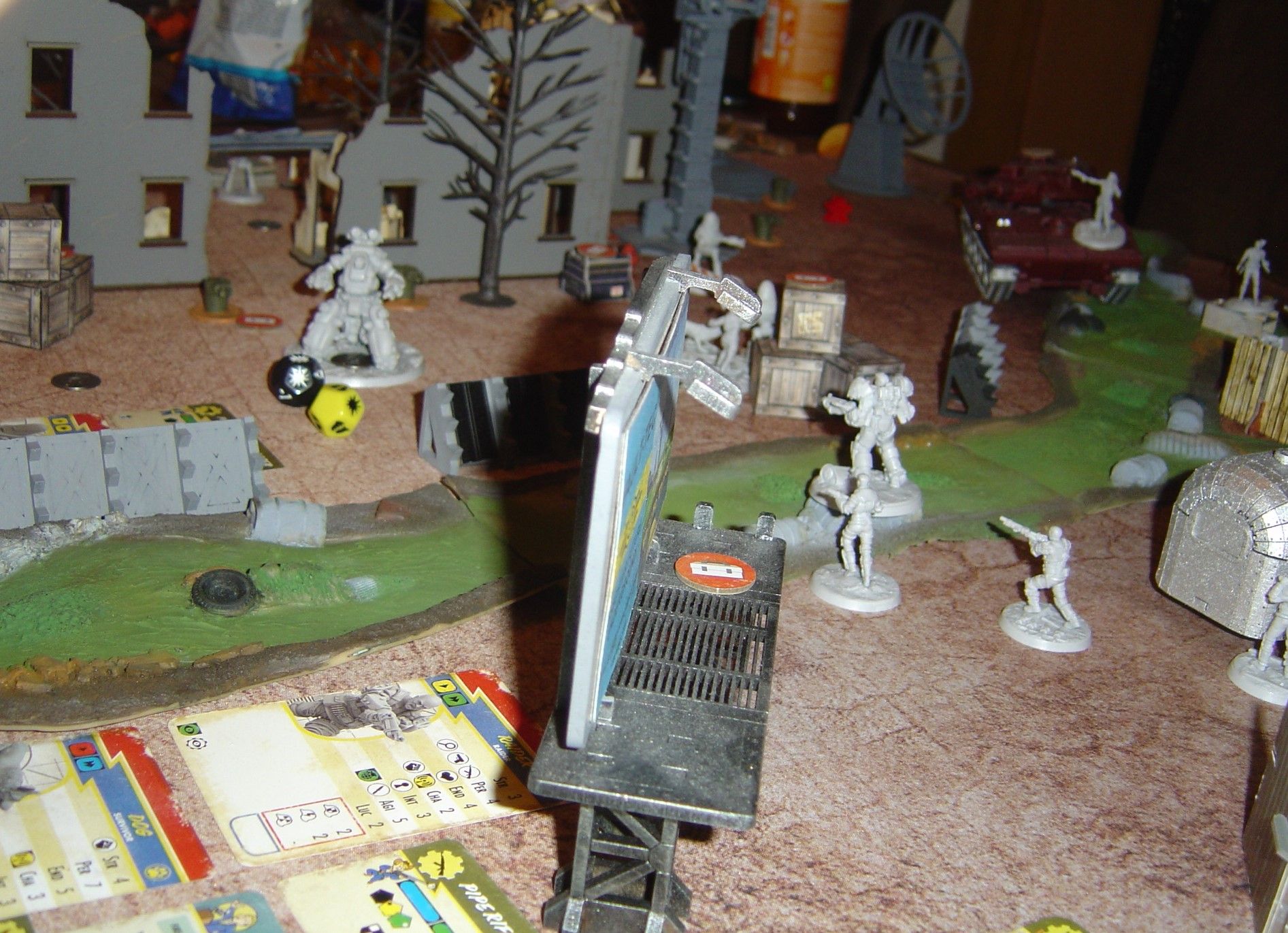 Rushing up to the front, the Veteran Raider was itching to take his revenge on that sentry bot … 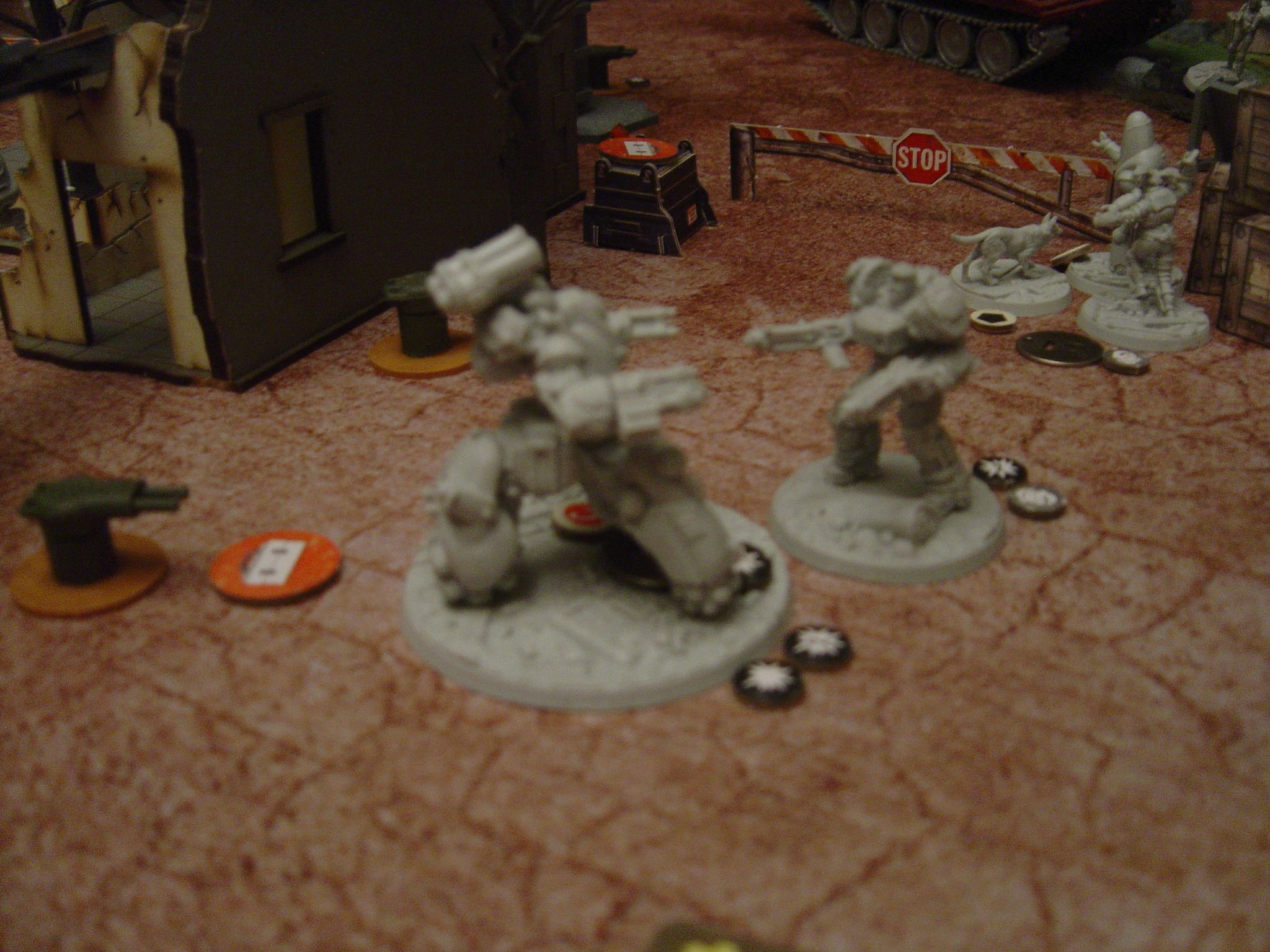 … charging into close combat with it. A combination of power armor, Overdrive, charge bonus and a sledgehammer put a serious hurting on the robot, too. 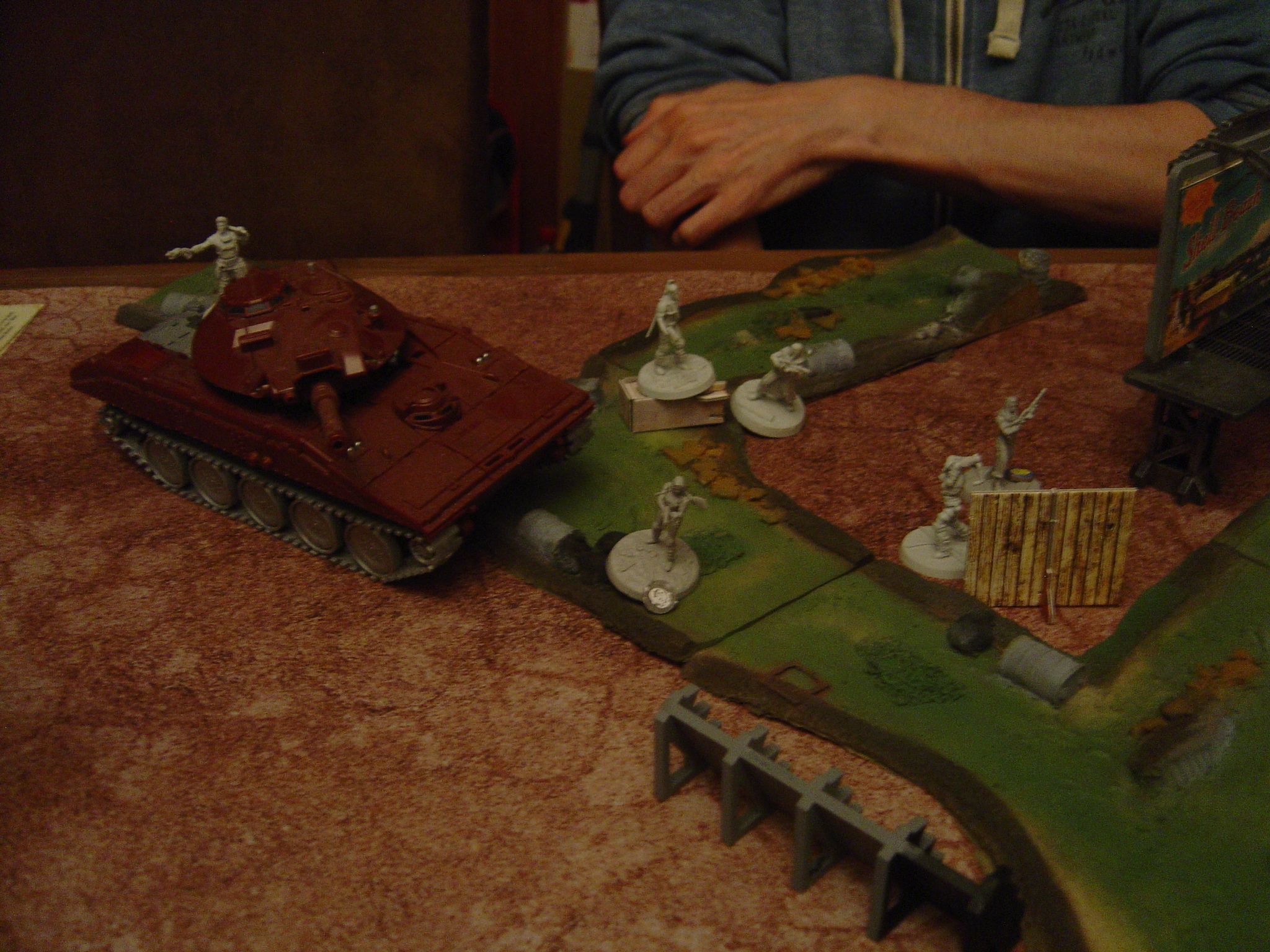 Meanwhile, the Survivors had cleaned up their flank - with a fair bit of luck, one might add. Sturges, having climbed atop the wrecked tank, was looking for loot to possibly use against the two turrets taking potshots at him. What he found was a Danger! and an item. The Danger card revealed an unstable fusion core, which he chucked at the turrets, severely damaging them. The item turned out to be a frag grenade, which followed the same path as the fusion core and took out both turrets.
Nate, having cleared or damaged a few robots at long range, found himself in close combat with the damaged sentry bot and with the help of a settler managed to hack it apart with his machete.
And Nora … let’s just say that with a laser rifle and Concentrated Fire, she’s a beast! 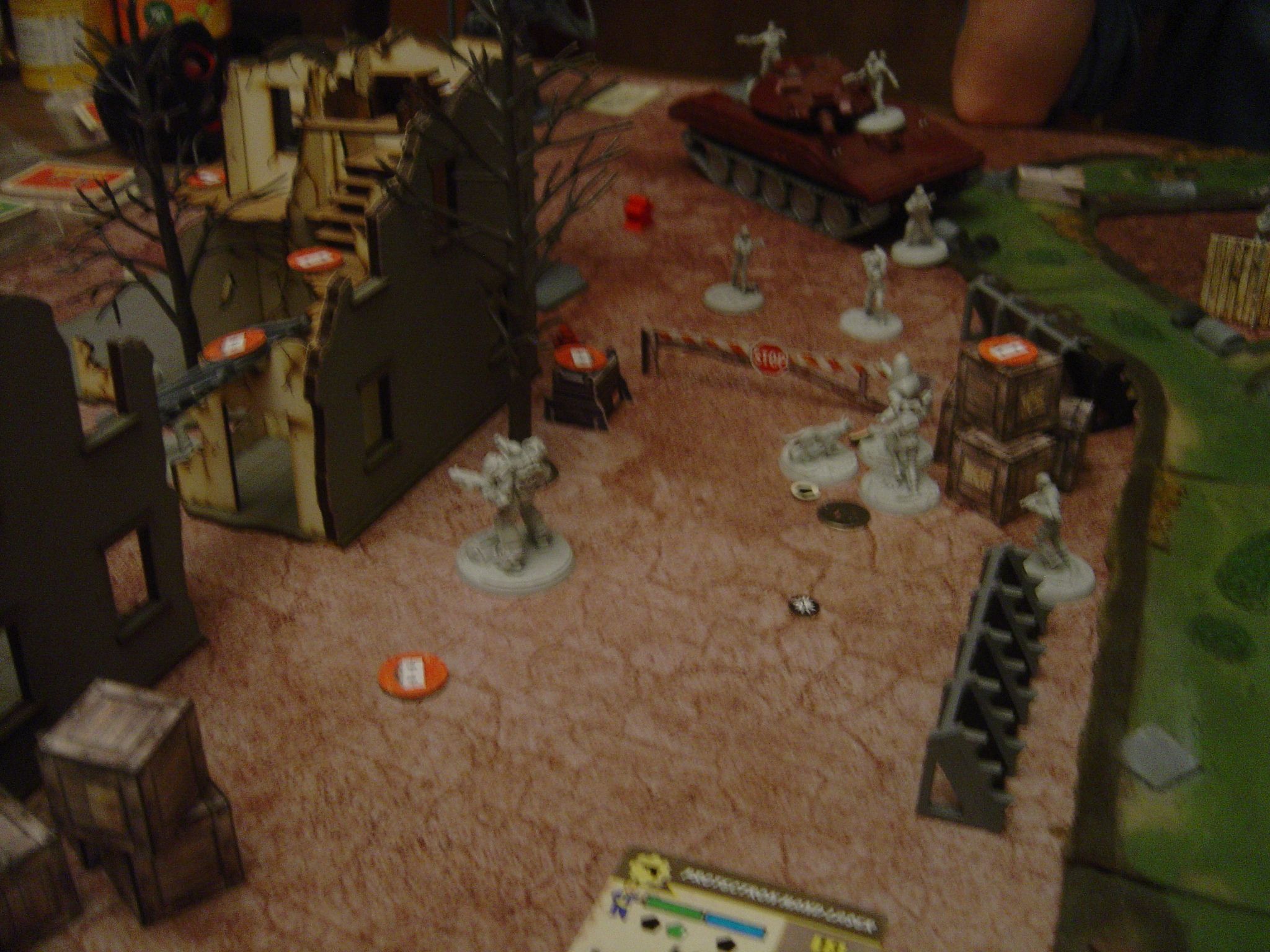 With but two Protectrons left standing (the other two turrets having been destroyed by the Veteran Raider in one activation thanks to a critical hit from a junk jet and some application of sledgehammer), everybody rushed in to loot the place.
In the end, the Survivors grabbed more loot tokens than the Raiders, so we gave them the win.

The Survivors came away with some really good loot, too. Chief amongst that a second Laser Rifle and a Railroad Rifle.
The settlement phase gave us a few more items to sell, earned us some extra caps via Exploration and saw us picking up a few more lockers, but we’re mostly saving our caps at the moment.

I like the idea for the scenario, a really enjoyable write up!

Thanks.
Glad you like it.
I have a few more homemade scenarios planned - hopefully we get a few of them played before the end of the year.