Last Saturday, we played another game of Fallout (our fourth game so far), this time trying to bring the big, iconic rocket of the Red Rocket stations franchise back to our settlement (using the Red Rocket Misunderstanding scenario, but with the rocket being our actual loot

). The super mutants in the area had other ideas though … 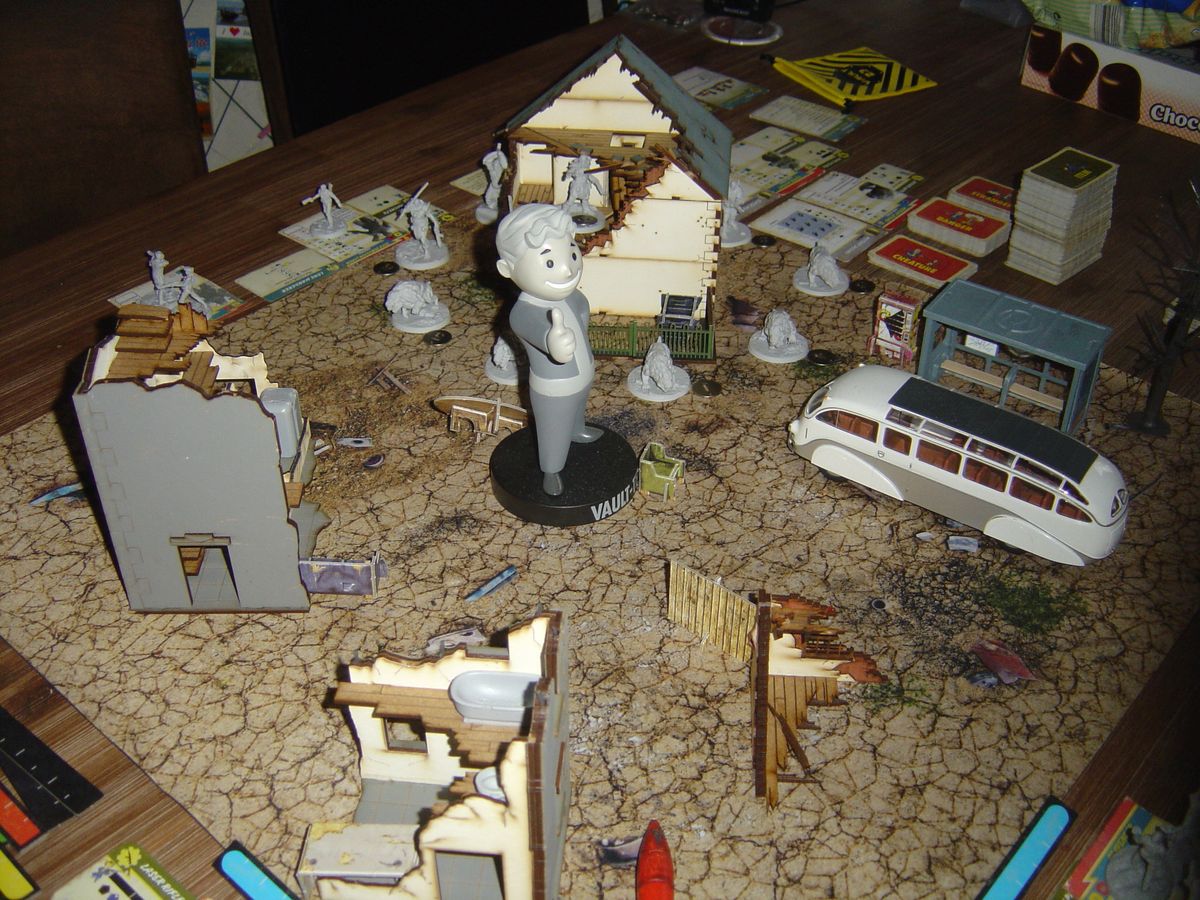 If you draw a line between the two blue range finders at the bottom, you get the borders of our side’s deployment zone, with the red rocket already in there.

From a different angle: 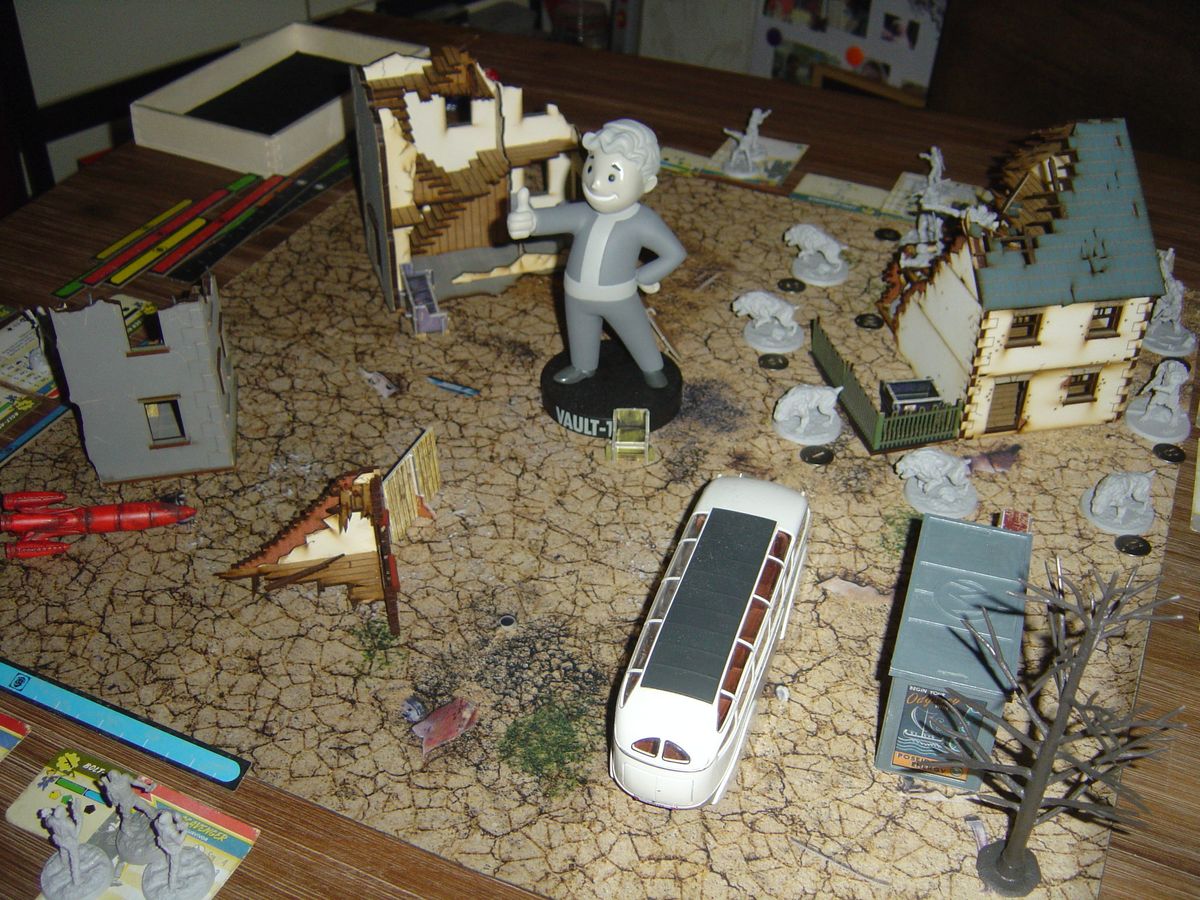 The game was 750 points (as our games usually are), with the super mutants being controlled by the game’s AI.
The mutants had a Brute with a Super Sledge, 5 Super Mutants with Pipe Pistols, Sledgehammers and Chains as well as 5 Mutant Hounds.
Our Survivors had the Sole Survivor with a Laser Rifle and Concentrated Fire, the Sole Survivor Loner with a Machete and a .44 Revolver, Sturges with a .44 with Comfort Grip and a total of 8 Scavengers with Bolt-Action Pipe Rifles.
Yes, we knew we’d likely face brutal close combat this time so we chose to go for lots of minis over Heroic or great equipment. Anything to block the super mutants gaining access to the rocket, which they wanted to destroy.

And they charged towards us right from the start, some staying in cover, others recklessly running at us out in the open. But there were so many of them that we couldn’t put a significant dent in their numbers before they smashed into us.
Damn, those hounds are FAST! 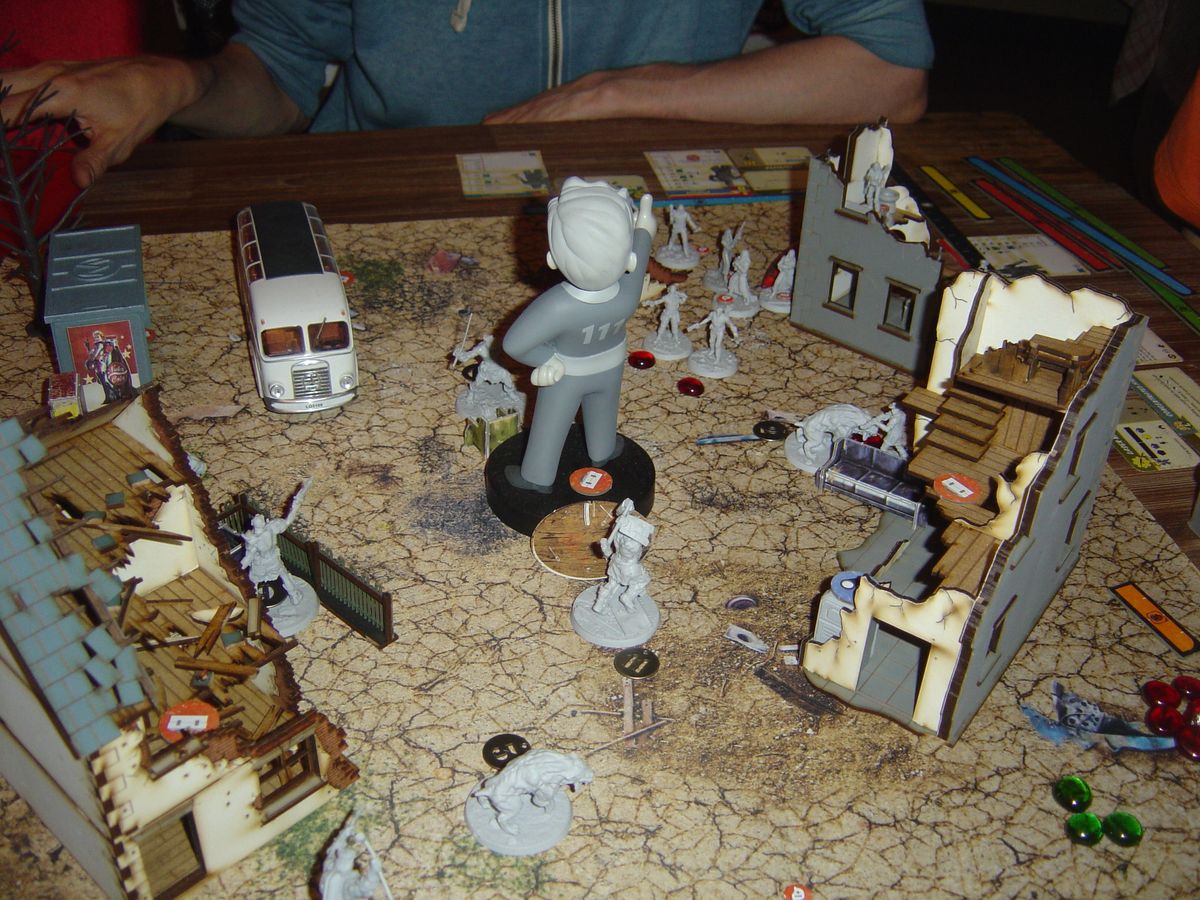 The Brute was one of the few hanging back a bit, using cover and waiting for his fellow mutants to soften us up a bit. 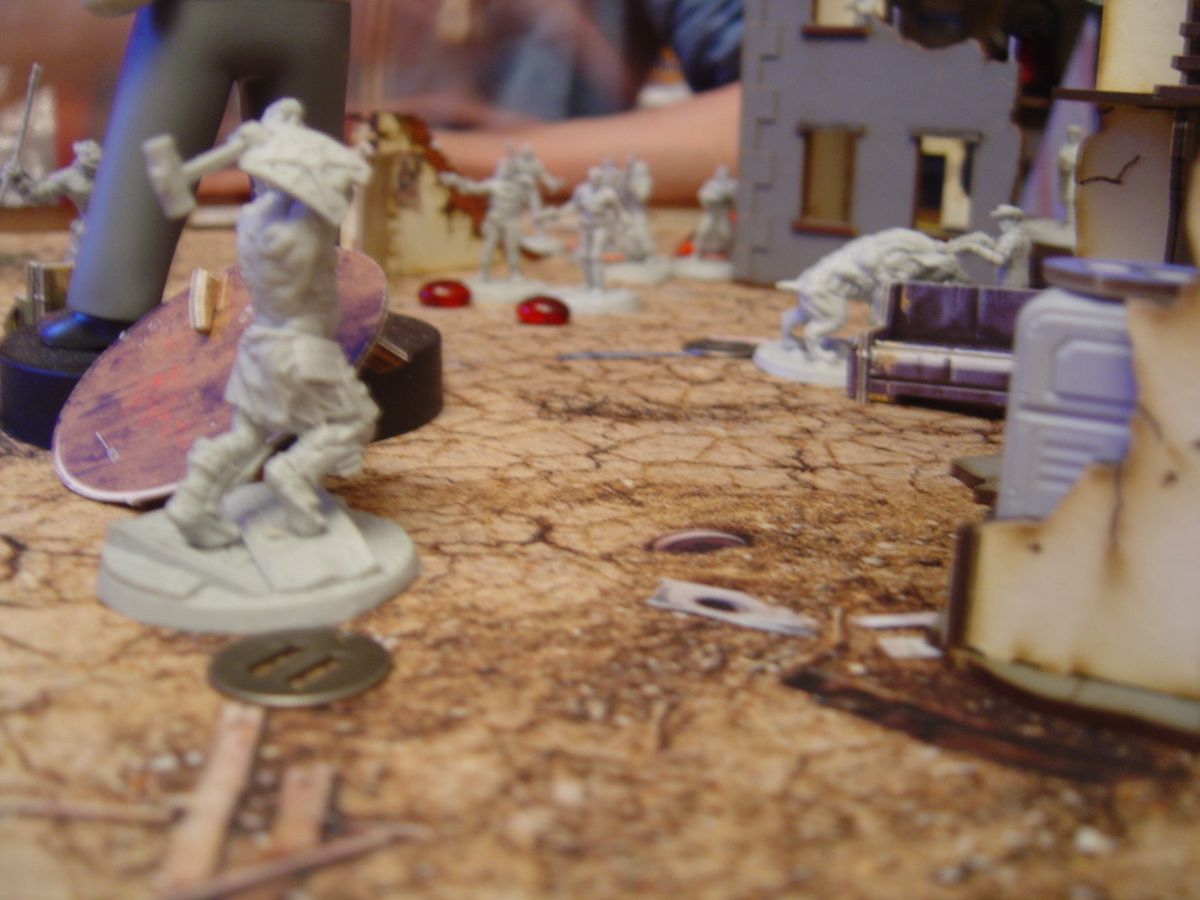 Pretty soon we had a big brawl going, where the Survivors did their best to block any mutant from breaking through to the rocket. And surprisingly enough it actually worked really well. Not only did we not get steamrollered, we actually managed to take down a lot of the enemy (who had some really crappy attack rolls in a row and could’ve taken us out if they’d rolled better!). So much so that we had an opening in the lines where a plucky Scavenger could push the rocket through. 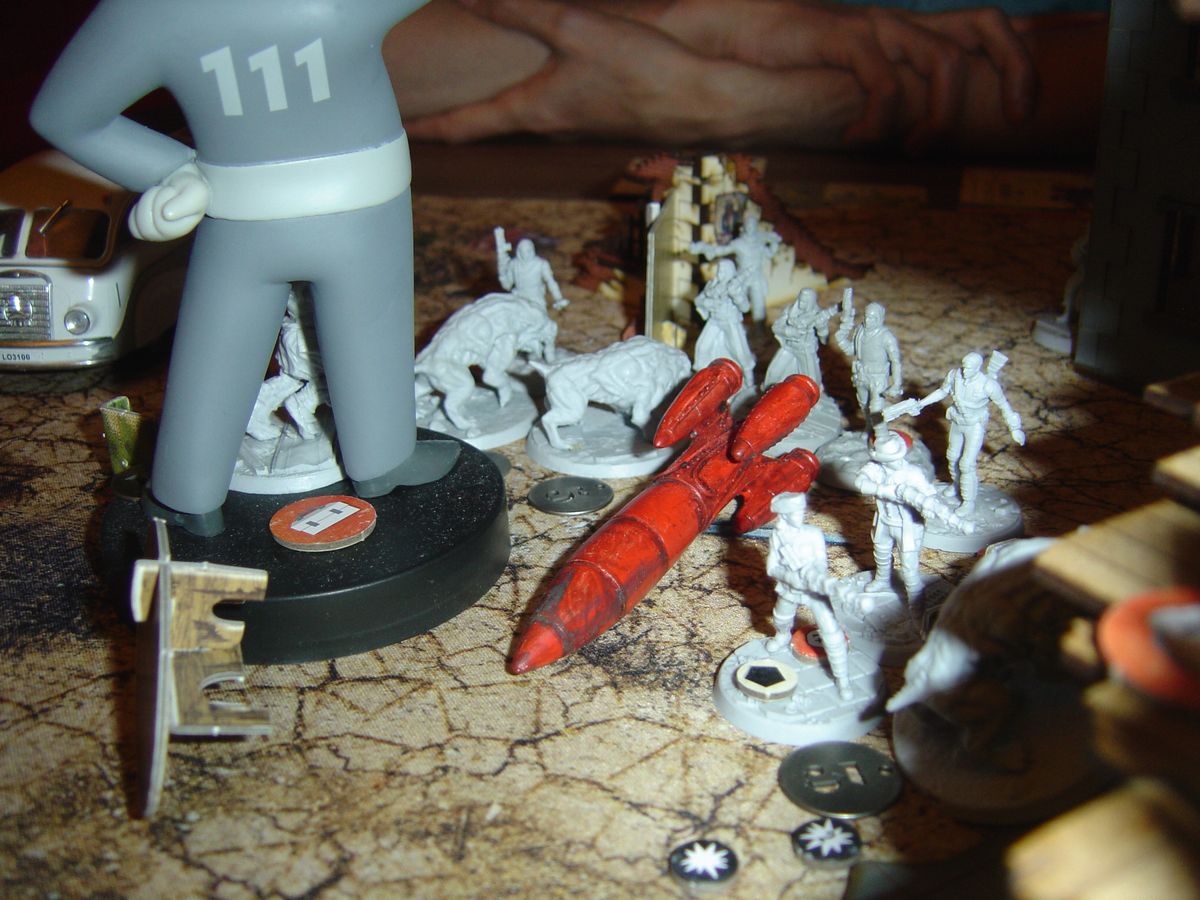 Sure, we took damage (in fact, only the unique characters took no damage at all) and lost two of our numbers, but we somehow managed to beat the mutant charge, with the Sole Survivor Loner being the clear MVP with his machete, taking down 2 hounds, a mutant and the brute. And he also had enough time to locate and retrieve a cooler box for our side quest!

With the super mutants taking more losses than we did, we could bring our numbers to bear, ganging up on them whenever possible, further preventing them from getting to our rocket. 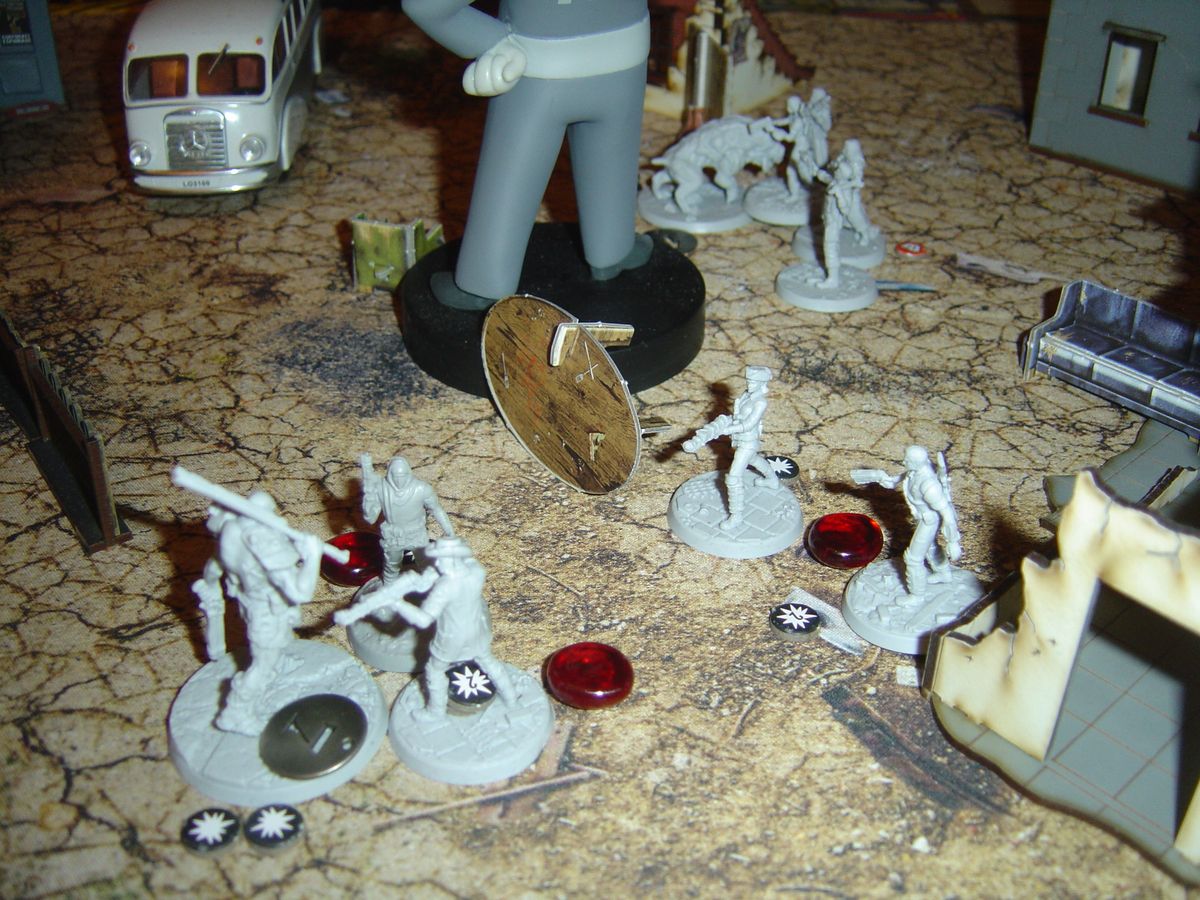 All this resulted in us pushing the rocket of the board, winning the game. 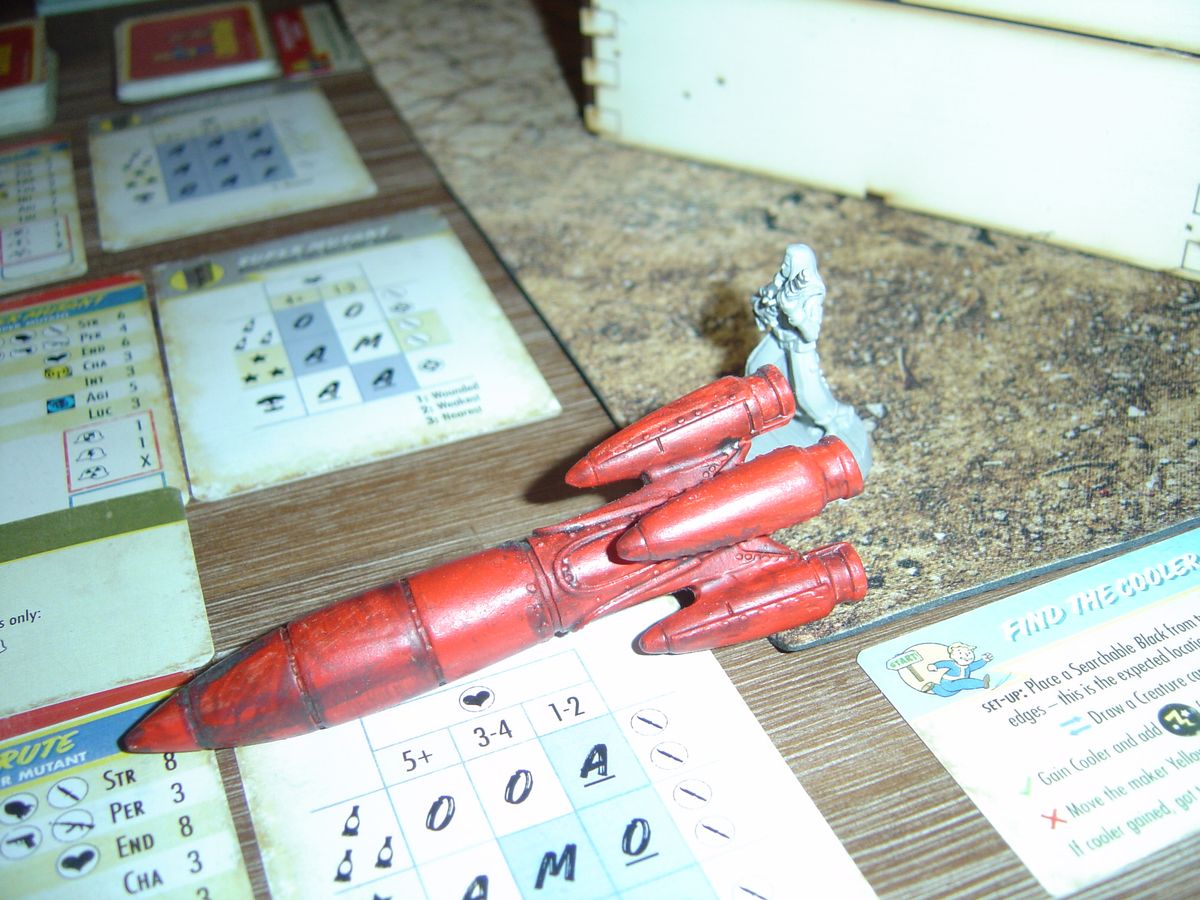 And on top of that, we found a minigun on a loot counter during the last turn, which will come in handy in future games.

Looks a good game mate, I like that Bus you have there

Amazing! Good to see you fared a little bit better than our own @Modiphius-Chris when we played this one as a demo game on Youtube!

Hope you enjoyed the scenario!

Thanks. It was indeed a fun game.
On one of the Event cards, we had a Brahmin Stampede, which is a brutal card on a 2x2 battlefield!