This time around, we tried a different approach from our usual games vs. the game AI in that I took the side of the Super Mutants and Daniel and Dieter played the combined Survivors / Brotherhood of Steel side. We played the Radio Tower Takeover scenario, so they had to keep me away from the radio tower. To make things interesting, we used a bunch of minis - the Survivor/BoS side had 1200 caps worth, consisting of:

Tje Super Mutants got 20% more caps due to the scenario, so I got to field:

We decided we wanted a full-on “We’re surrounded” situation, so the Super Mutants came from all around … 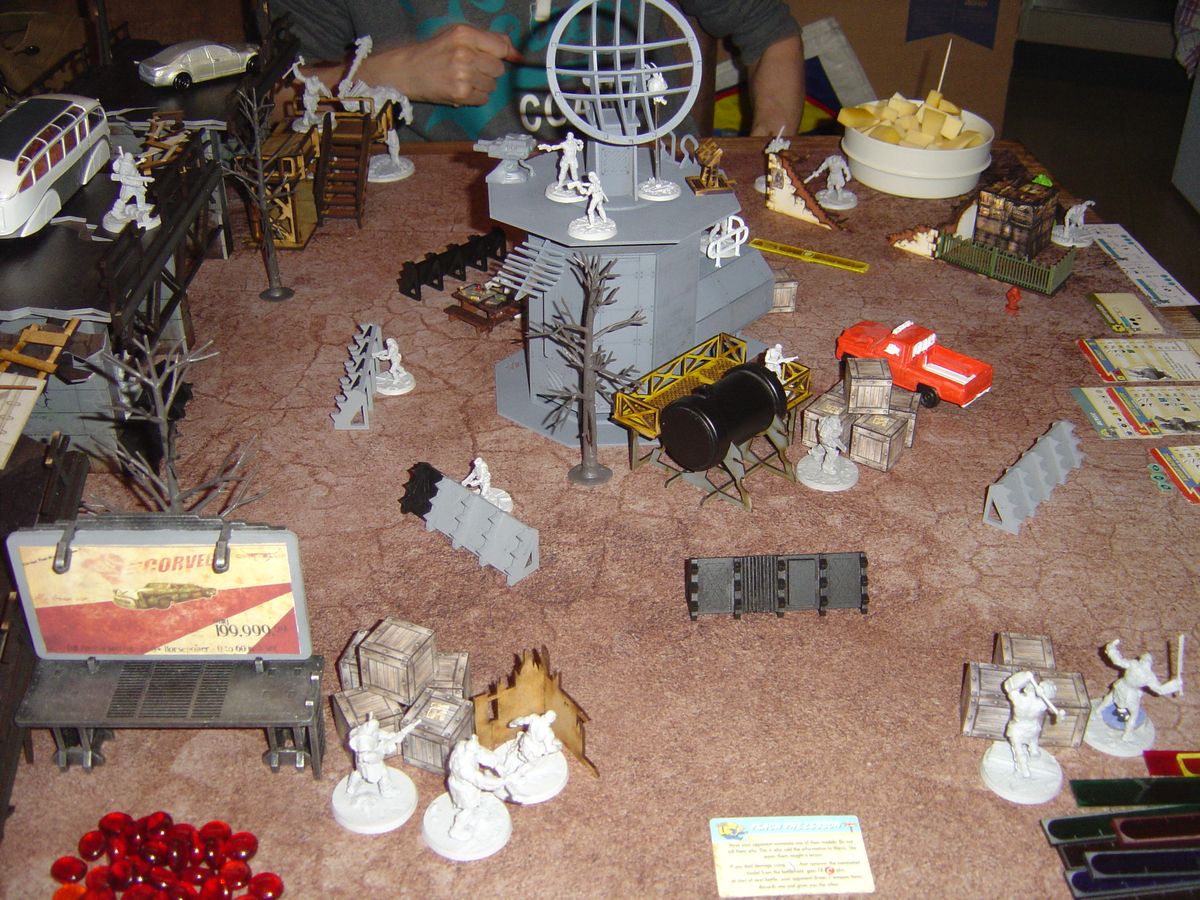 … and immediately got peppered with shots. Hammer only got off a single shot with his rocket launcher before Nate took him out with his minigun, but in turn the Suiciders managed to blow up a couple of defenders. 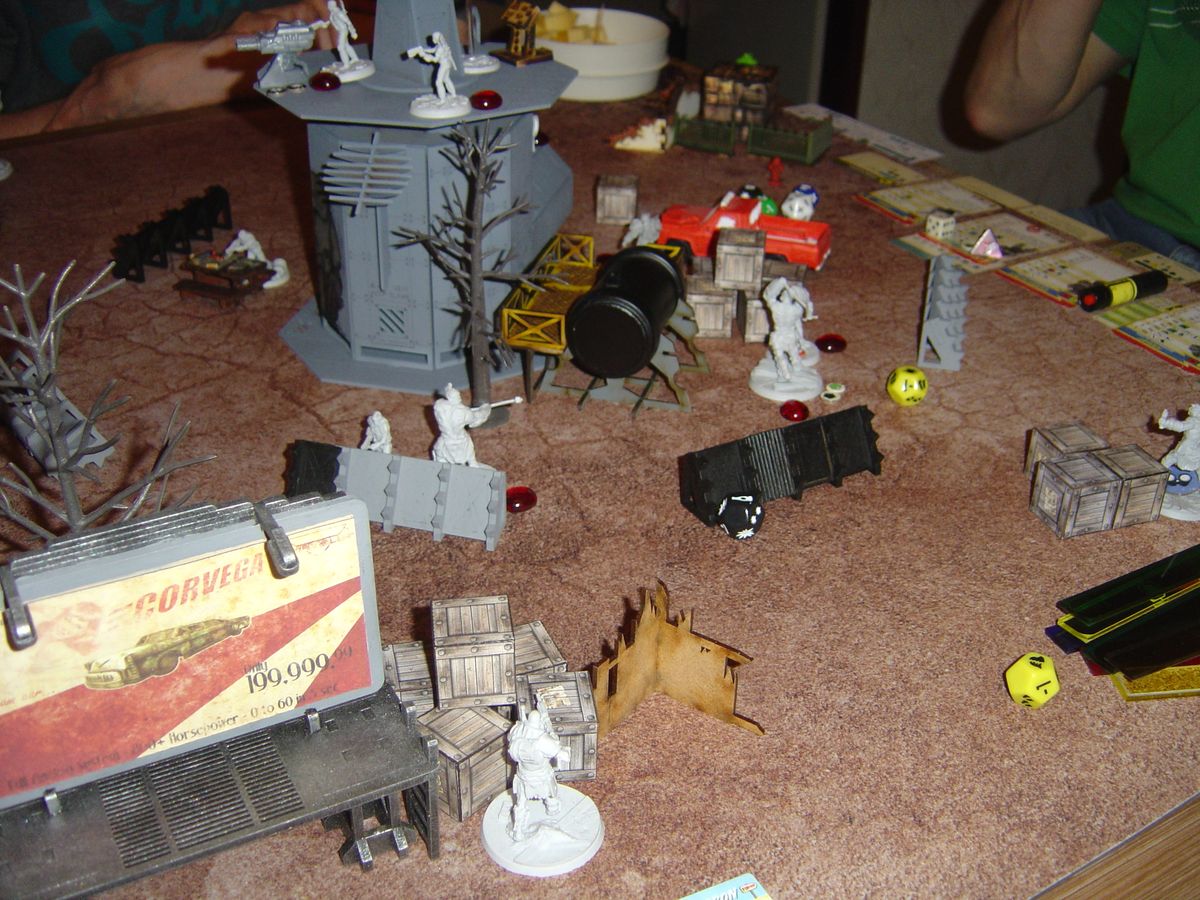 Moving in as quickly as I could, I tried to bog the defenders down in close combat, to keep them from retreating onto the tower. 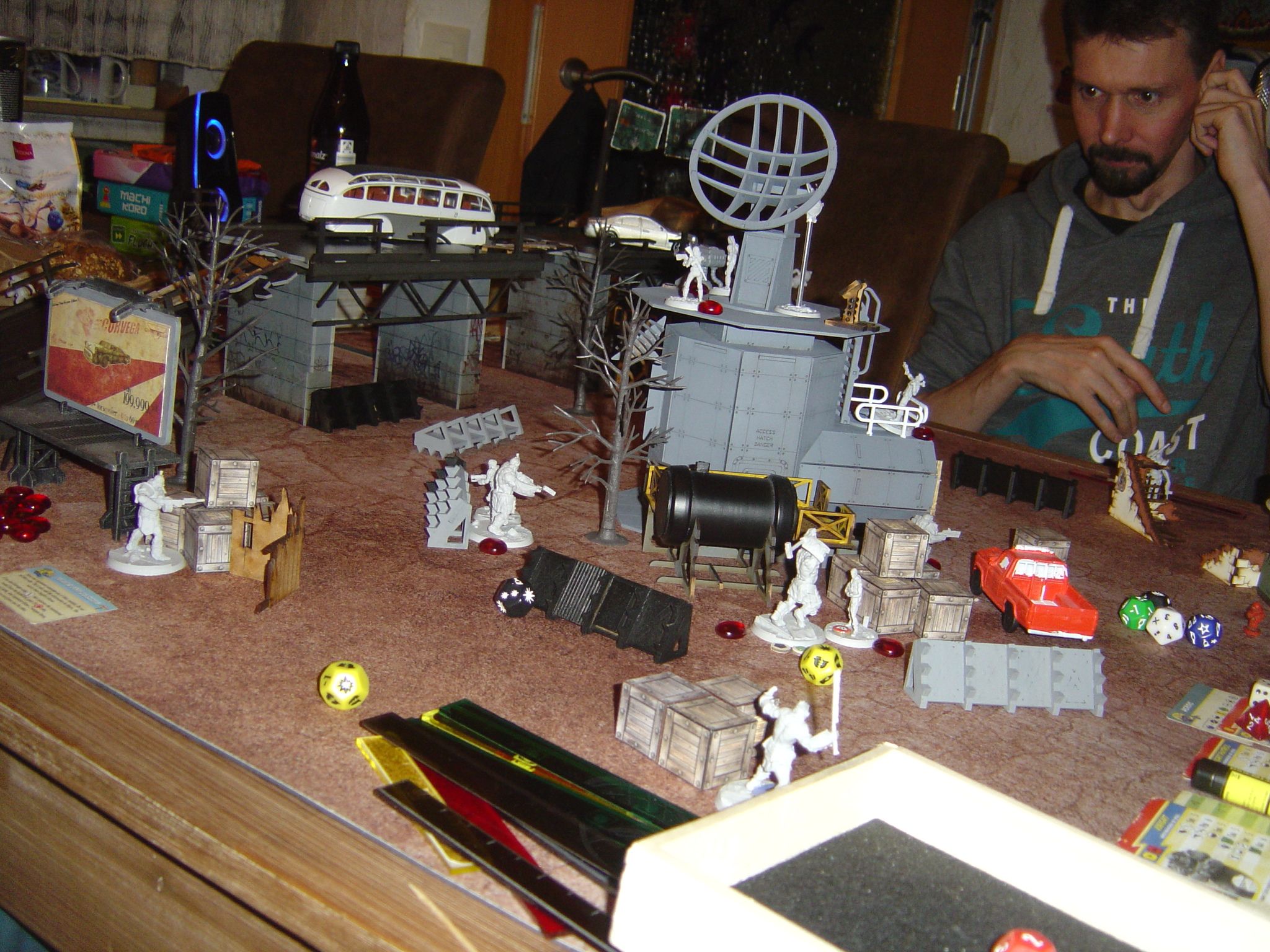 Didn’t quite work out as planned when the hounds got chewed up by turret fire and Nate’s minigun, but I got a few guys into combat and was ready to put down some pain … 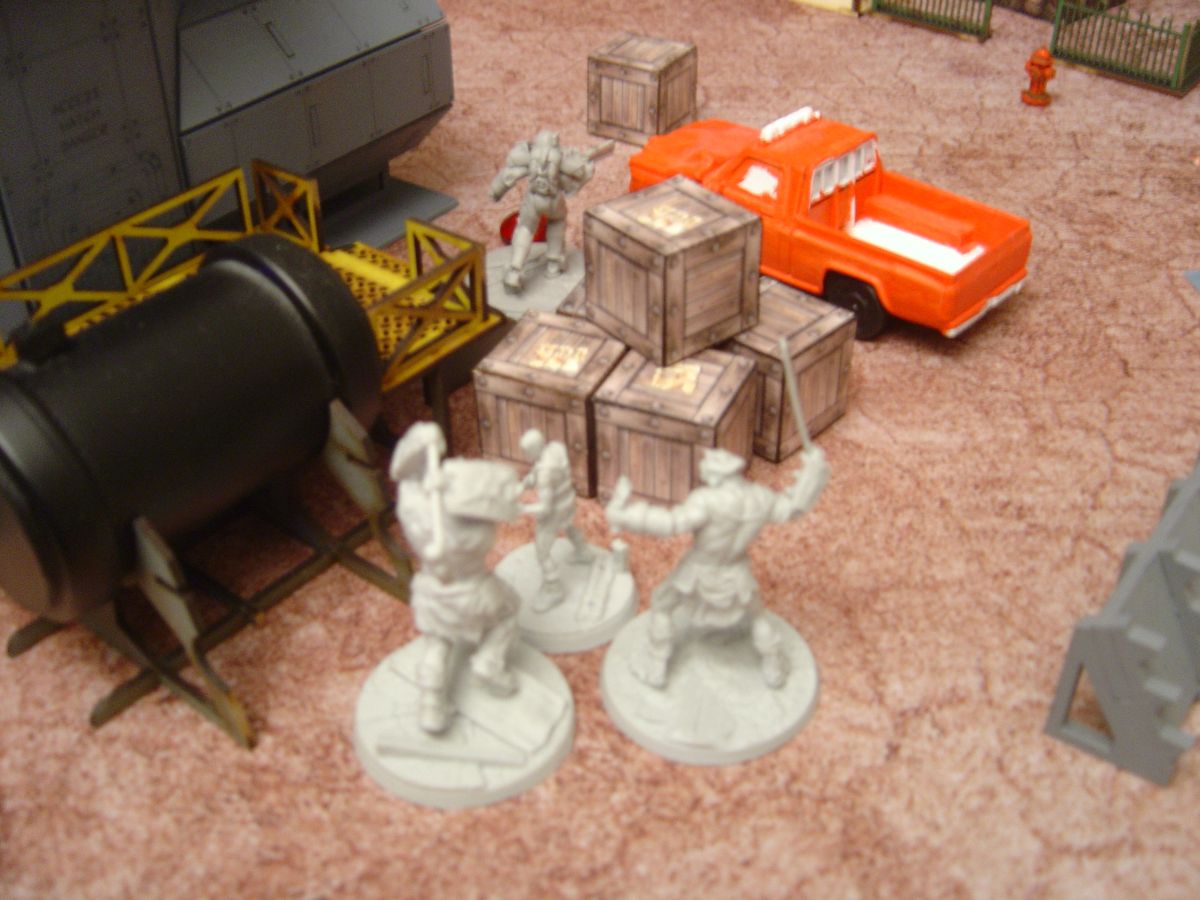 … when the Knight decided that the guy my Mutants had charged was doomed anyway and so tossed both of his grenades into the fray, killing everyone! 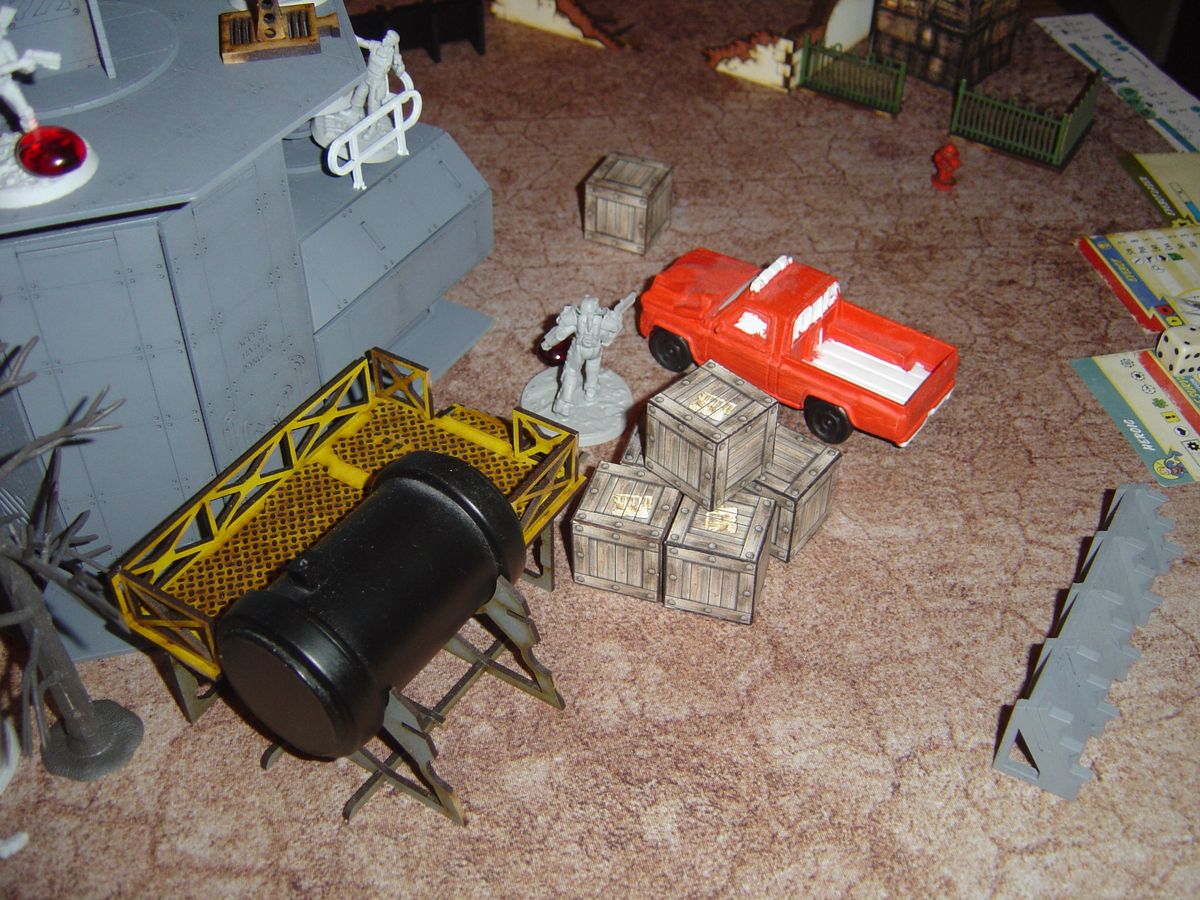 On the far side of the tower, attackers and defenders had pretty much chewed each other up, with the three Heroic characters having retreated onto the top of the tower. The two Mutants I managed to get onto the tower were dealt with easily, so all I had left was a Brute and the Behemoth, facing three Heroic Survivors, a Knight, an Eyebot and a lone Knight Patrol.
I charged both the Knight (and hurt him, too) and the Knight Patrol and was in turn charged … by the Eyebot? 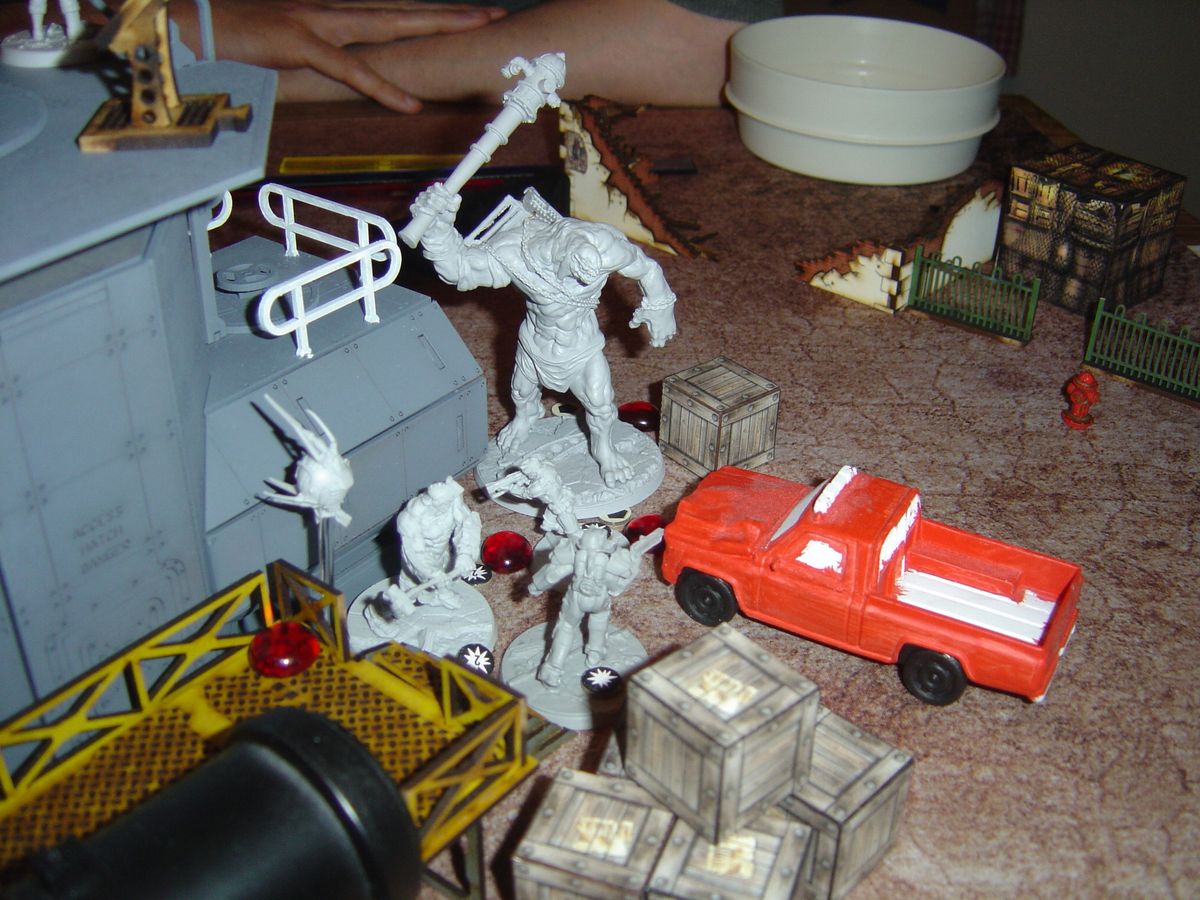 Turns out, this was actually a cunning move to get the Knight out of combat, so he could fire his laser rifle … at the car! In a stroke of luck, the thing not only went into meltdown, but immediately exploded, killing the Brute and the Knight Patrol and injuring the Behemoth. 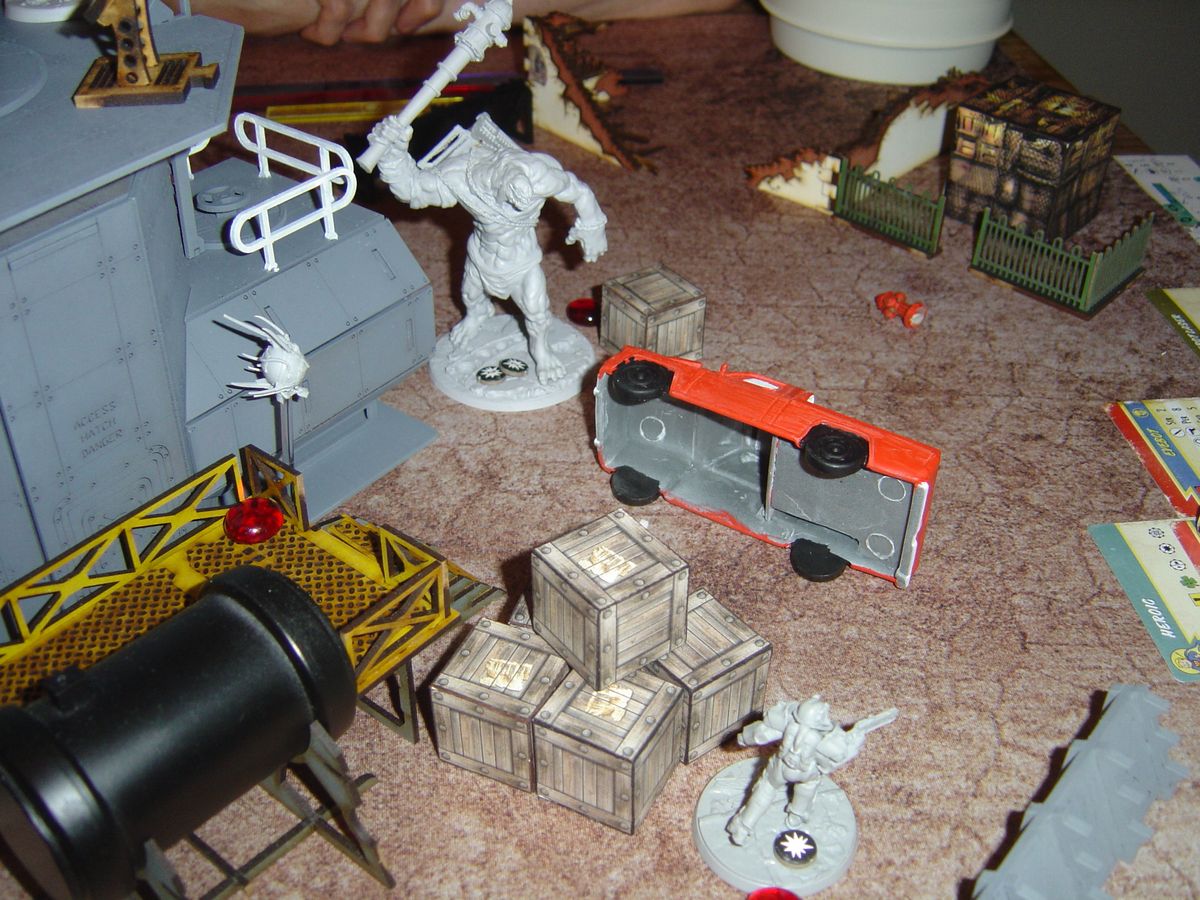 With just the Behemoth left on my side, I had no chance of winning. Especially since it was now the turn of the three Heroic characters, who systematically shot the Behemoth to pieces. 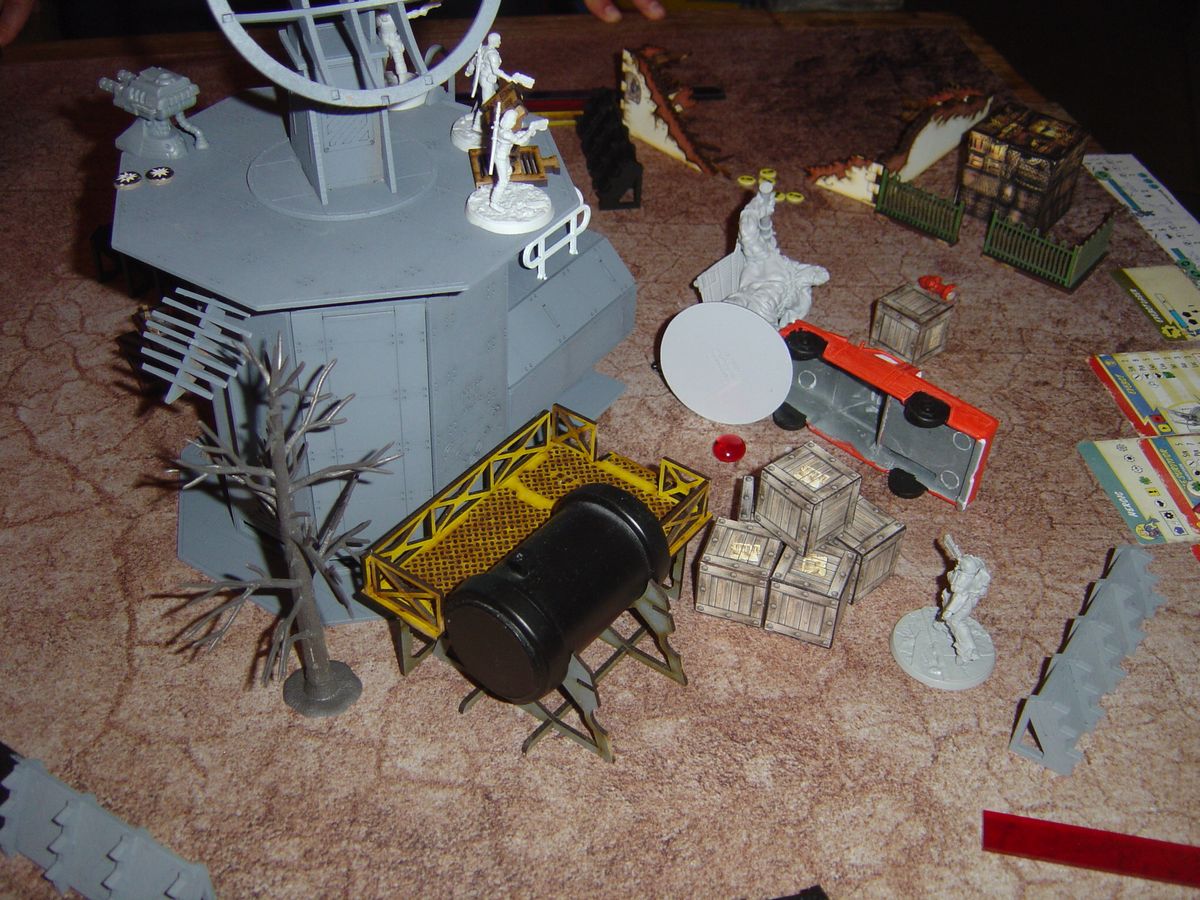 And thus, the tower was defended.
In our Settlement Phase, we put up a Boston Bugle stand to finally use Boost cards in our game, did a bit of trading and such and got a Thirst Zapper from our weapons dealer. Neat!

That’s a great write up and sounds like a fun game. Thanks for sharing!