Last Saturday, we started our next mission of FWW, this time trying to blow up an overpass in order to drive back the Super Mutants from this area.
This was a smaller game, set to only 602 caps. (Yeah, I tried for 600, but it worked out to 602 for both sides.)

On the Survivor’s side, played by Daniel and Dieter, we had:

On the Super Mutant side, played by me, we had:

Initial placement saw the Super Mutants scattered around the battlefield, trying to cover as much ground as possible. 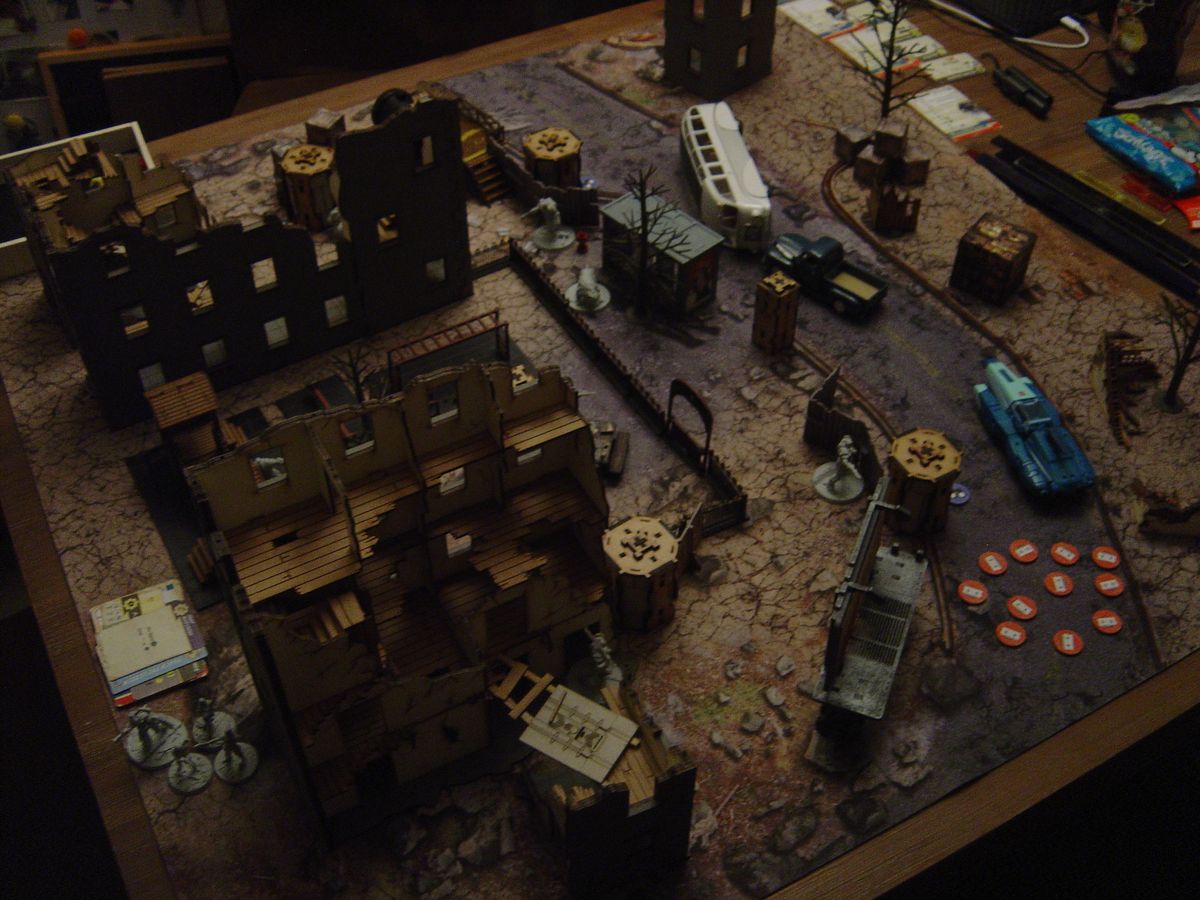 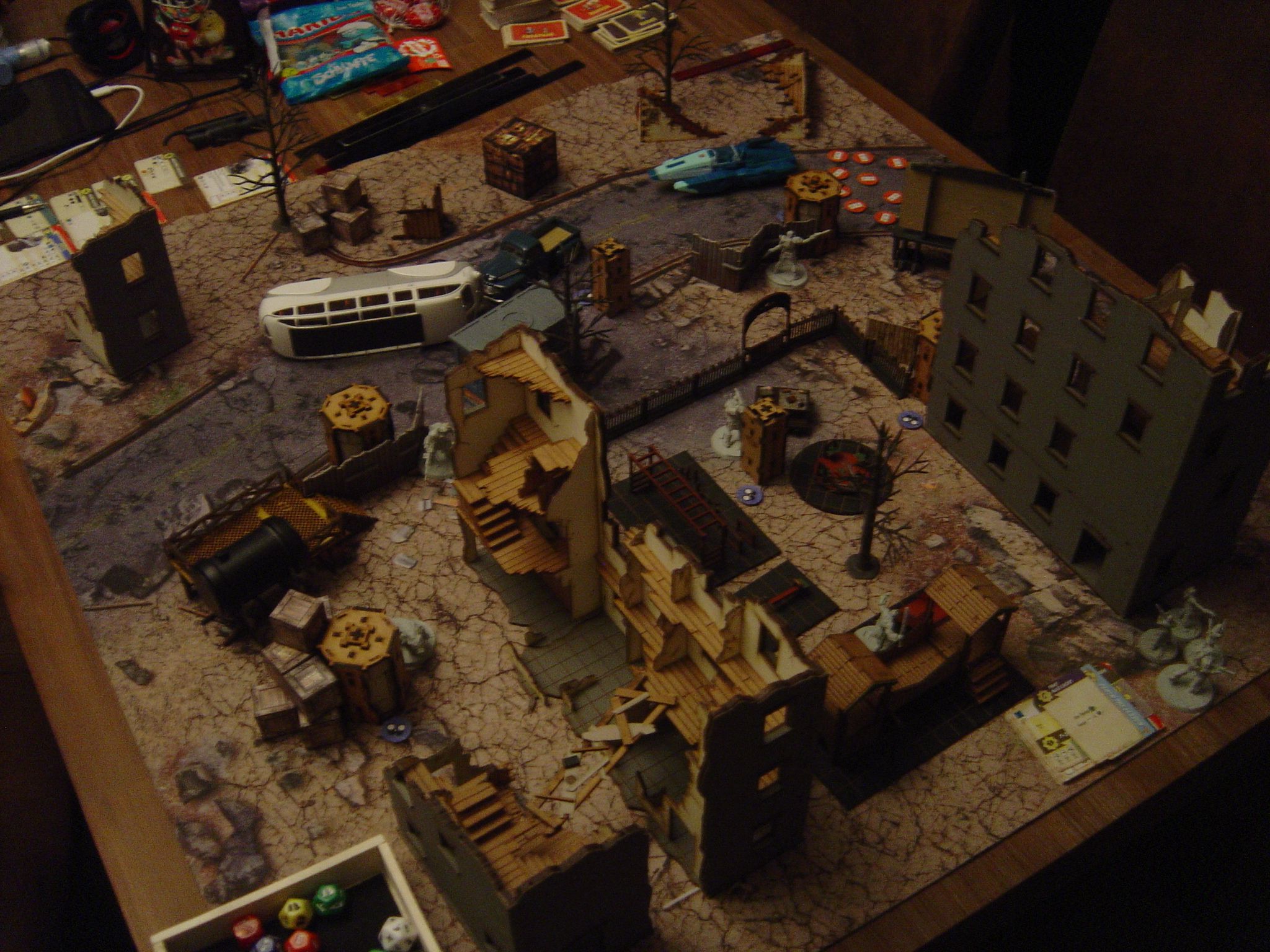 Daniel and Dieter decided to come in closely packed and maximize their firepower … and I was kind of an idiot in trying to charge them instead of going into cover and just waiting for them to come to me. After all, time was on my side since they only had 6 turns during which to place the charges to blow the support columns of the overpass. Oh well, hindsight and all that …
Anyway, I did charge, and at first things didn’t look too bad: 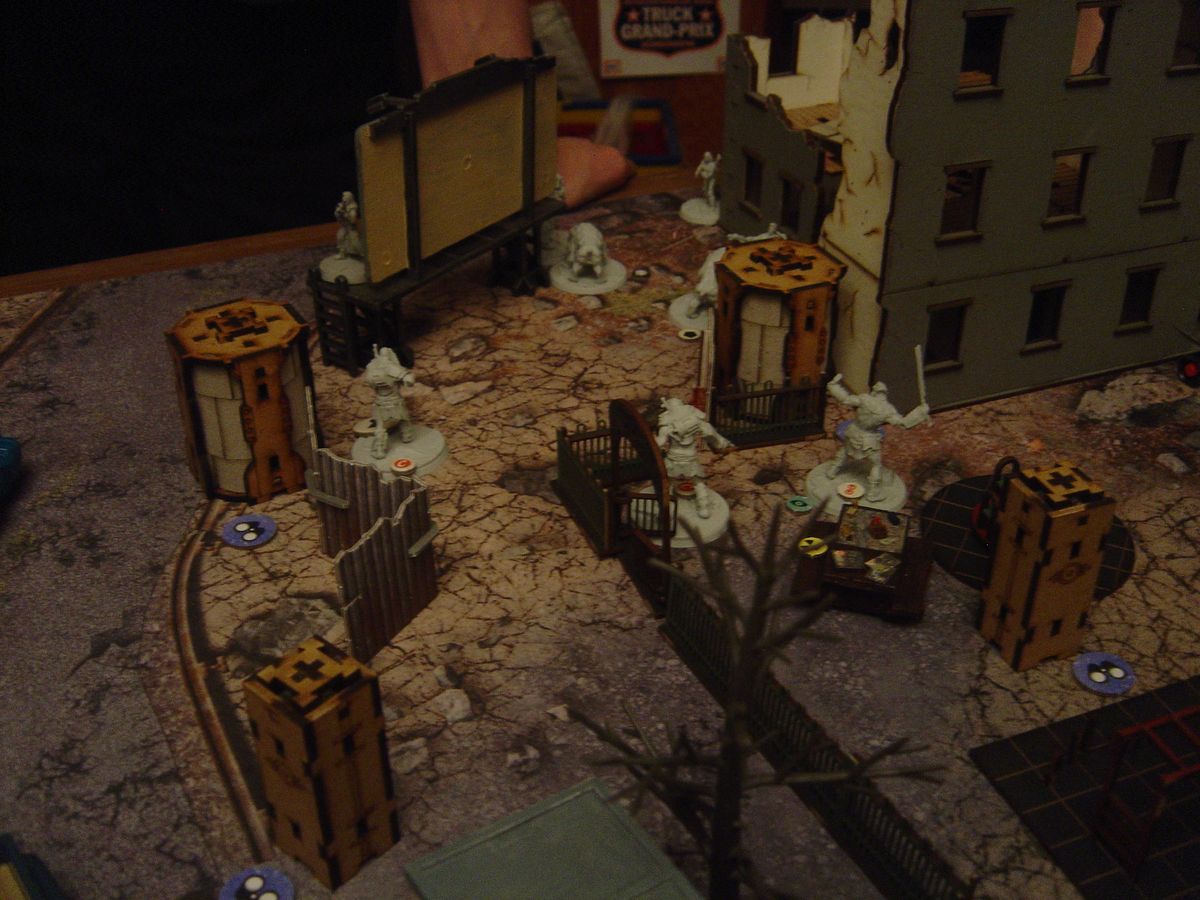 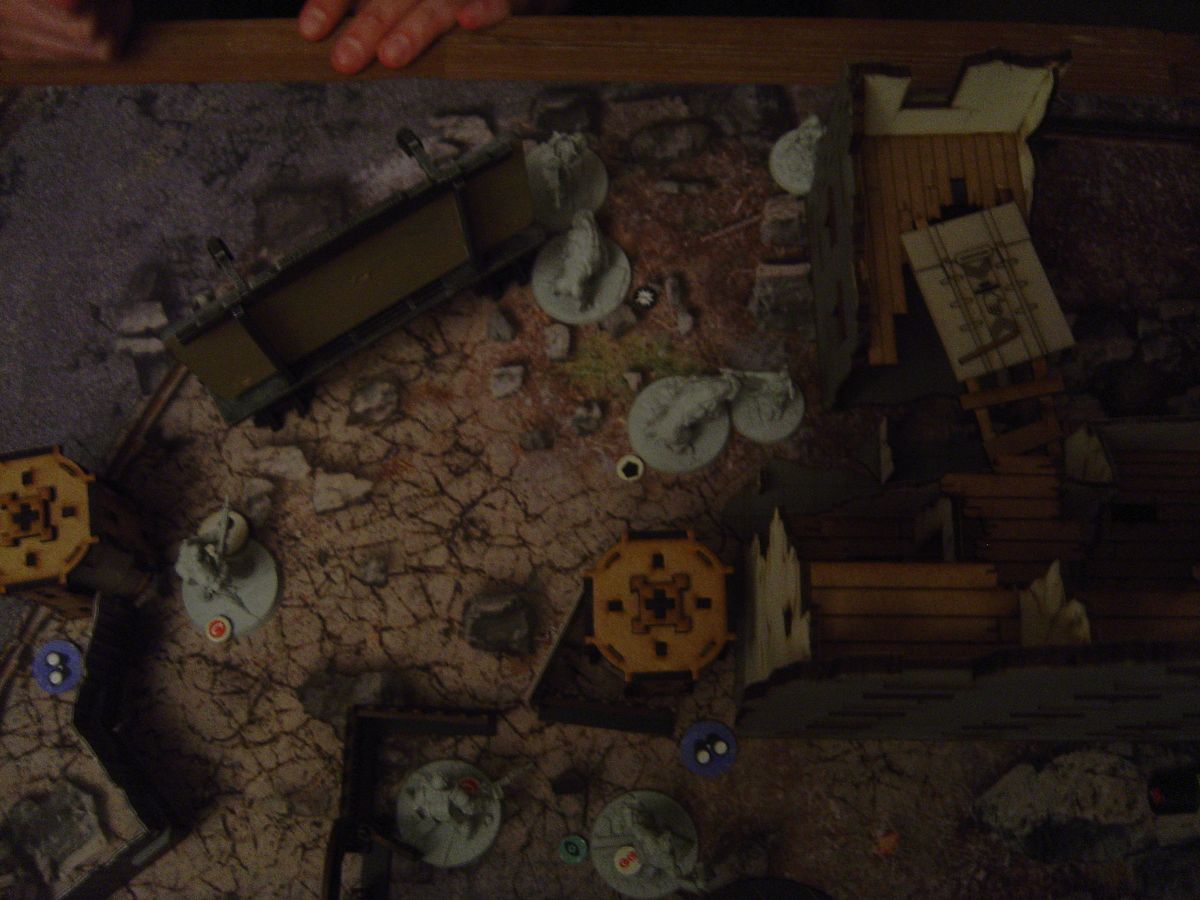 Buuut … I couldn’t even dent the Knight, I managed to completely miss the Scavenger each time I fired on him, I only managed to strip the armor tokens off of Nora and put a tiny bit of damage on Sturges - while pretty much getting obliterated myself. The Brute, my best chance of doing some real damage, didn’t even make it into melee thanks to Sturges shooting him in the head repeatedly.

Meanwhile, the Scavenger had snuck around the swirling fray and already placed 2 charges. And with just 2 Super Mutants left standing in melee with the Knight, both Nora and Sturges dashed off to place more. 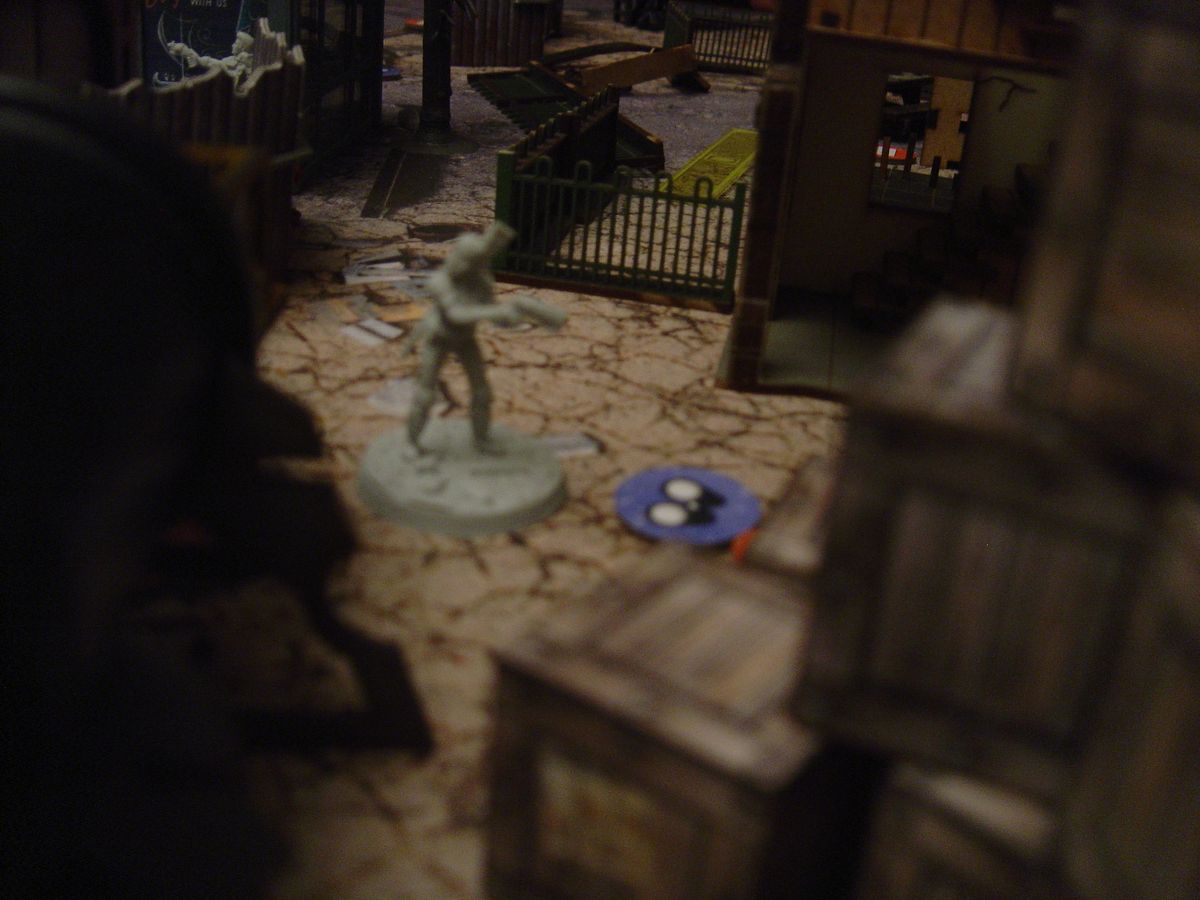 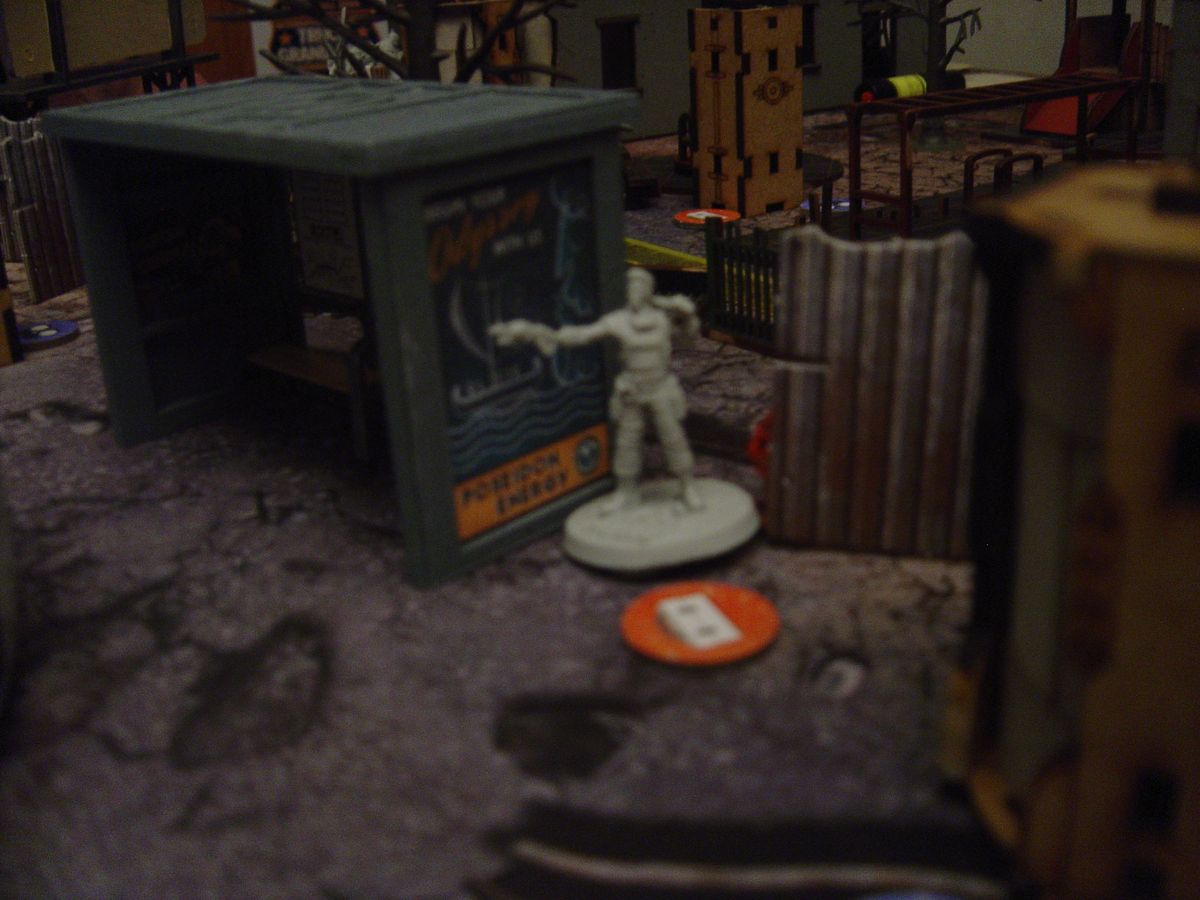 They just so managed to get all six charges set by the end of Turn 6, thanks to Heroic movements etc, though Sturges didn’t make it out of the blast area of his last charge. 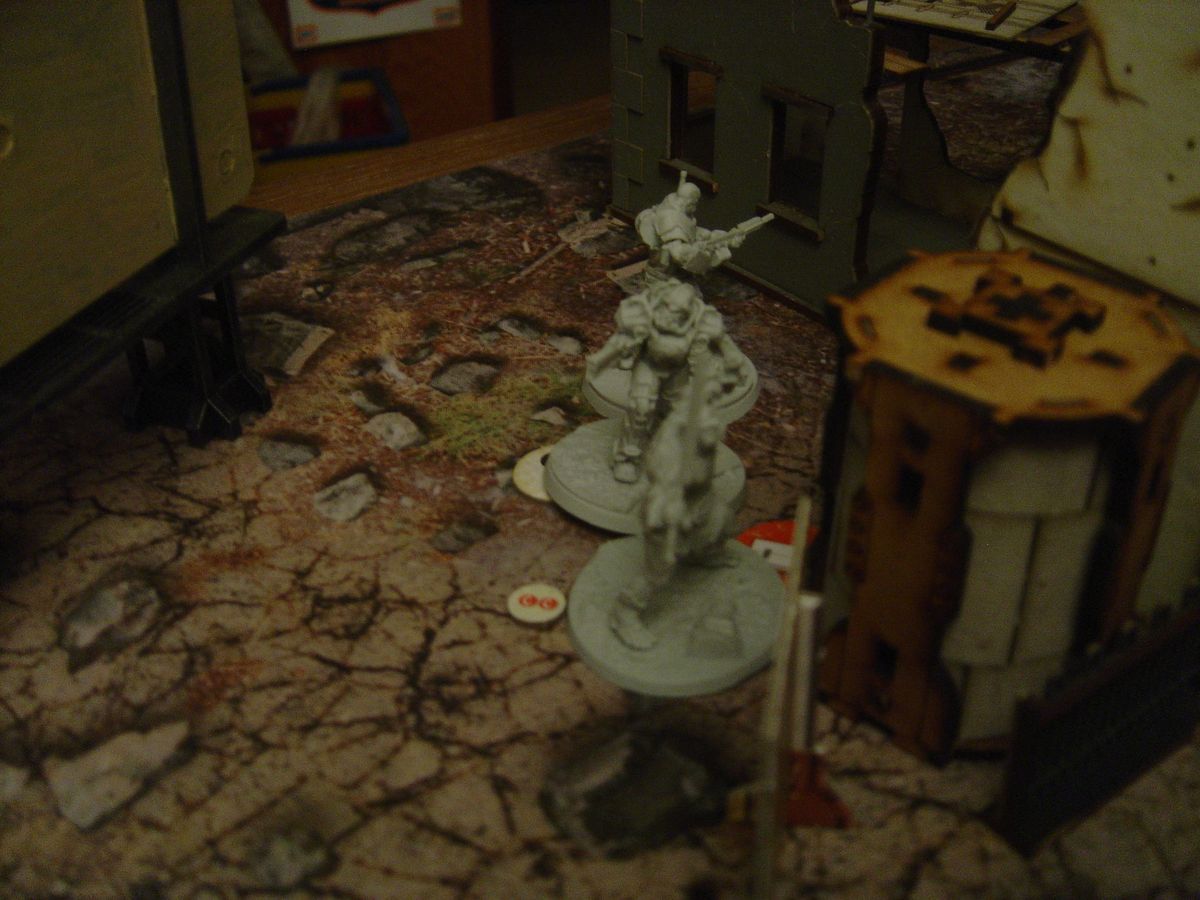 Well, being stuck in melee with 2 Super Mutants right on top of an active charge, things didn’t look good for him. But he just waited out his two opponents, activating after they had already tried to harm him (unsuccessfully) - and then he just walked away, shrugging off the parting blows from the Mutants and then watching from a safe distance the charge blowing up and ripping his opponents to shreds.

That ended the game and the Survivors blew up all 6 support columns.
In the Settlement Phase we did a bit of trade and finally managed to aquire some melee weapons, but we didn’t spend any caps since we really need to invest in more land first.

Sorry to capture your beautiful thread - noticing Dieter as a name, I do wander if you are from Germany.

Have you joined the “Deutsche Fallout Wasteland Warfare Tabletop Gruppe” in Facebook yet? Lots of nice people there

I am from Germany. Aus Bremen, um genau zu sein.
But I’m not of Facebook, so haven’t joined said group for obvious reasons.

Nice table. I will have to look more into the MFD stuff now.

My strategy would have been to get a power core to Blurr, so he could transform and go all “Liberty Prime” on the Brotherhood!!

Sorry. I couldn’t resist commenting on a great piece of terrain. I’m begging, borrowing, and stealing from just about every other game with terrain I have myself. Just greatful I hung onto all my Heroscape. The walls from the Mavel set have been perfect.

I have a whole bunch of Transformers and figured that at least a couple should fit in both size and general look. Blurr was just the first test, there will probably be more in upcoming games.
And with cars having the ‘Meltdown’ rule and a tendency to explode, we did theorize what would happen if he got hit by gunfire …

Yeah I have a few too that I’m now thinking about adding in, thanks to you.

Good vehicles are hard/expensive to find.