A view towards the mine entrance: 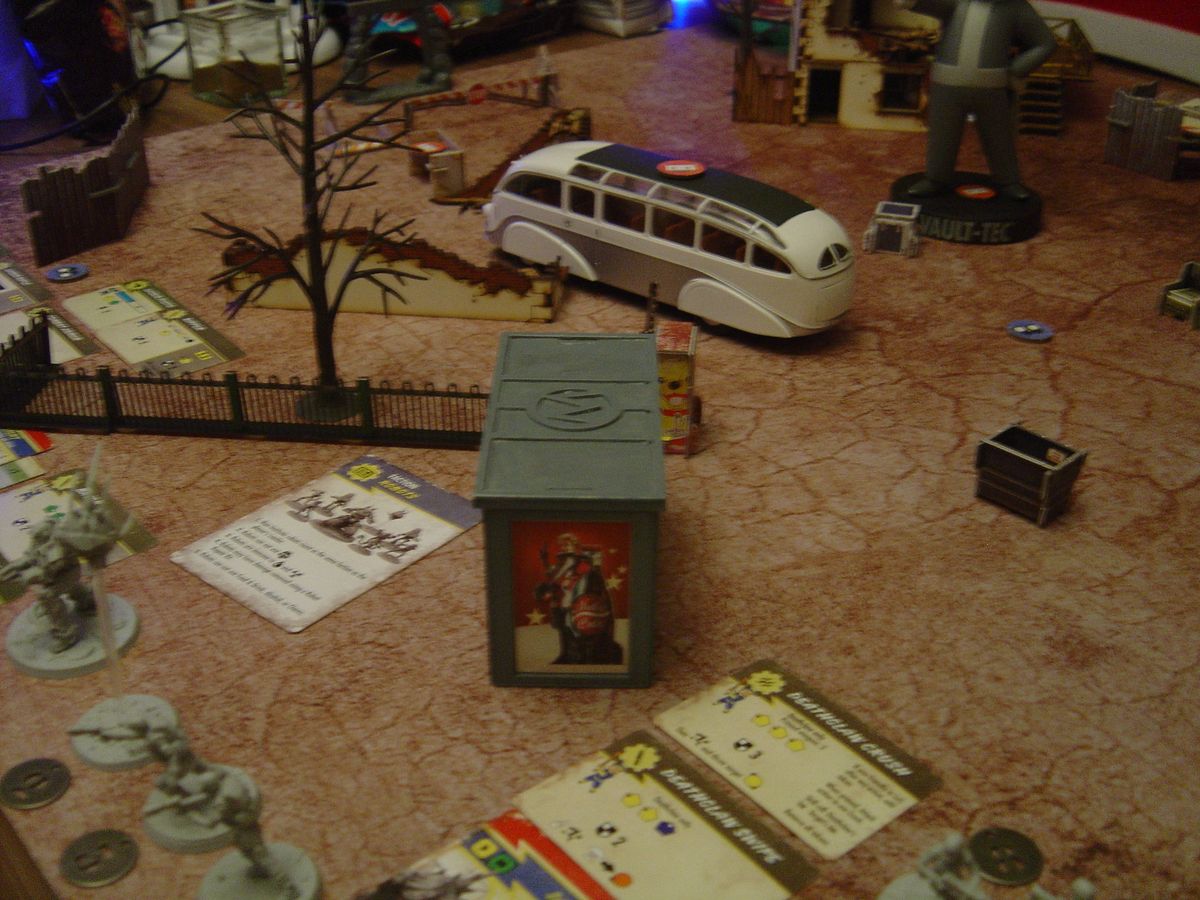 Both sides snuck through the ruins, trying to stay as quiet as possible. 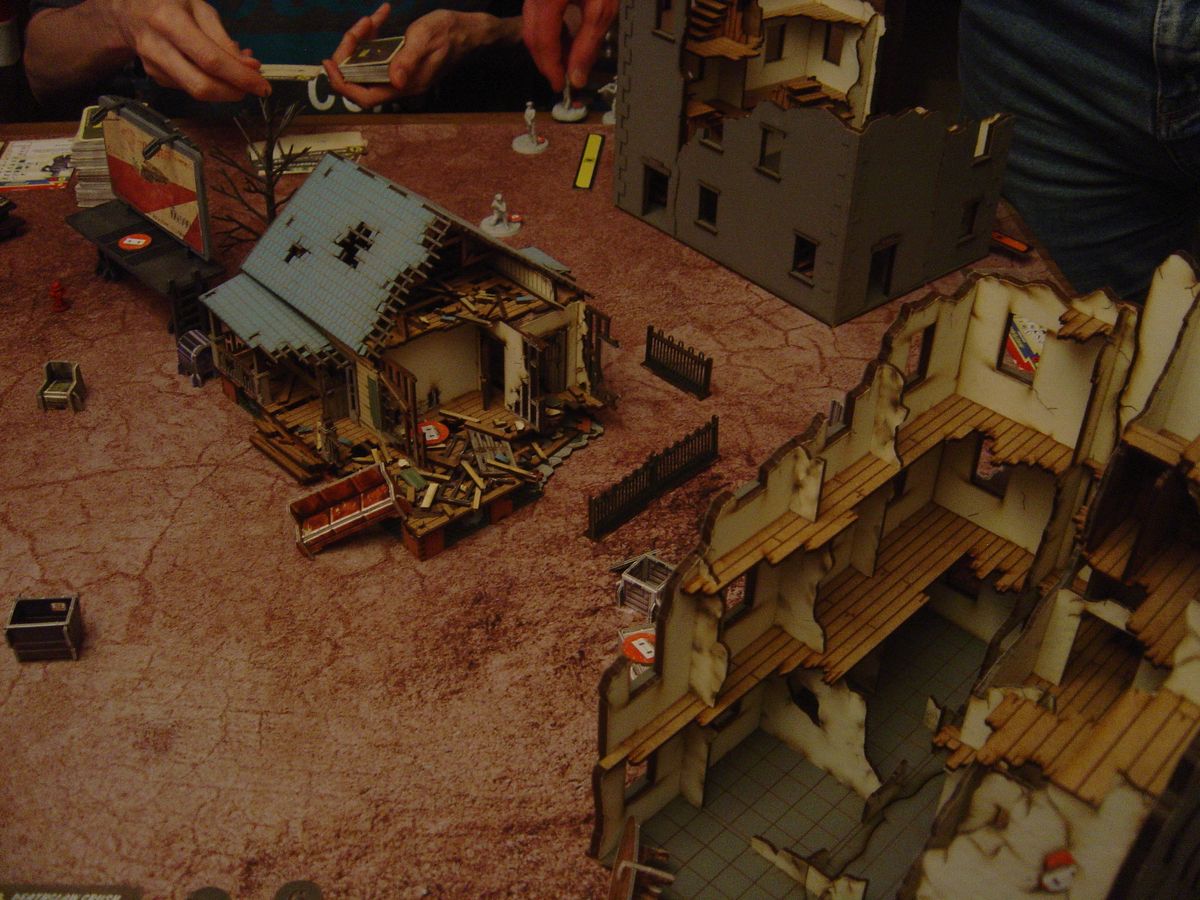 But by the end of Turn 1, a deathclaw showed up anyway. 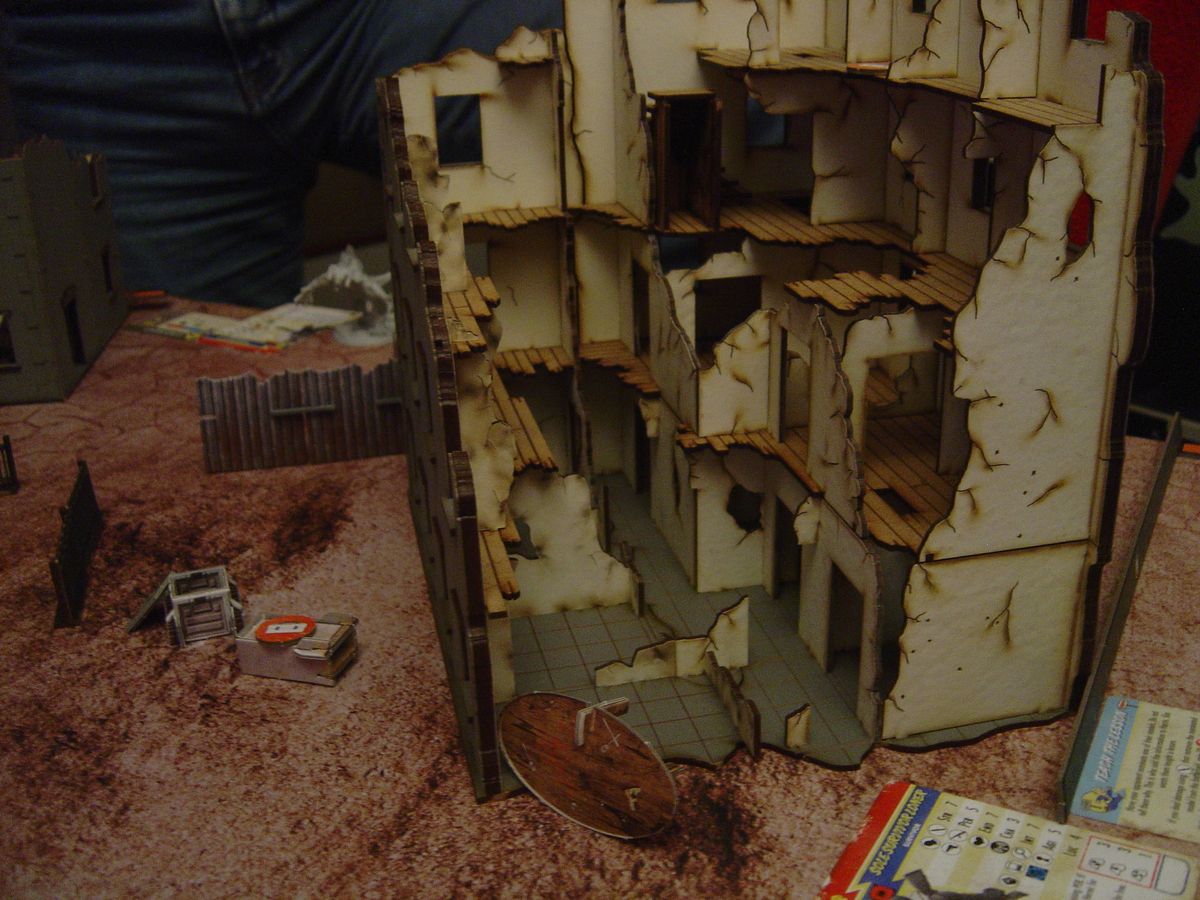 Yes, I know there was no chance of it not showing up since it is an integral part of the scenario, but with everyone just sneaking about and no shots being fired, it felt like both sides were trying to not get noticed. Didn’t work out so well though.

Fortunately for us, the deathclaw decided to go after the Enclave.

The regular foot troopers stood their ground against it, pouring fire into it. 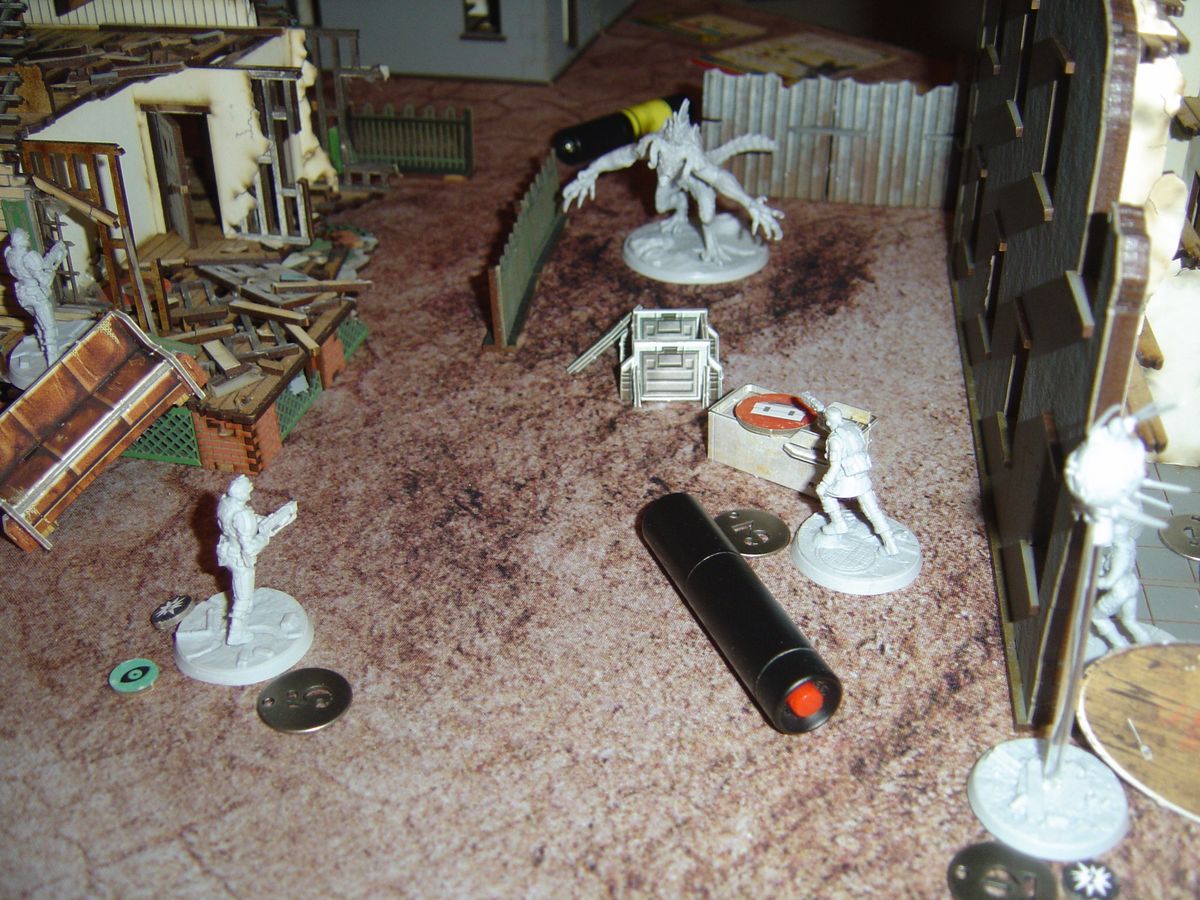 Alas, deathclaws are pretty damn tough and volleys of laser and rifle bursts just bounced off of its hide. A full 6 minis unleashed Hell onto it, yet it only lost a single point of Health!
And then the beast tore into them and ripped 2 of the soldiers apart …

Meanwhile, the Knight raced towards the mine entrance and we had to figure out a way to stop him. 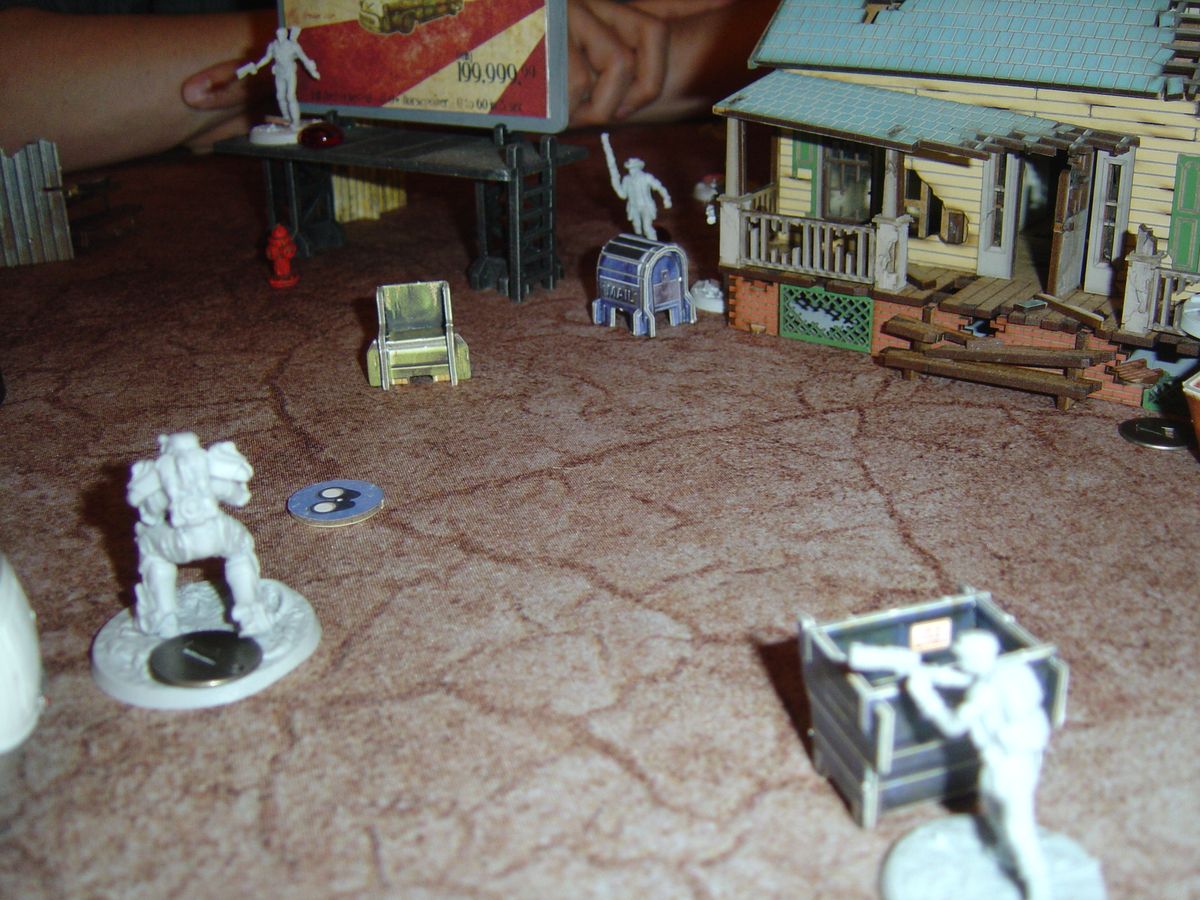 Taking up positions, we were hoping the Knight would activate late next round so we could get him out in the open - and it worked!
Nora had already snuck in a single hit on him with her laser rifle before, setting him on fire. But he wasn’t much impressed by the fact that he waas a walking bonfire, thanks to his armor … so we had to change that.
Nate tried a different approach, targeting the bus next to the Knight with his minigun and blowing it up on the first hit! This did hurt the Knight and the remaining burst from Nate did some extra damage on top of that. 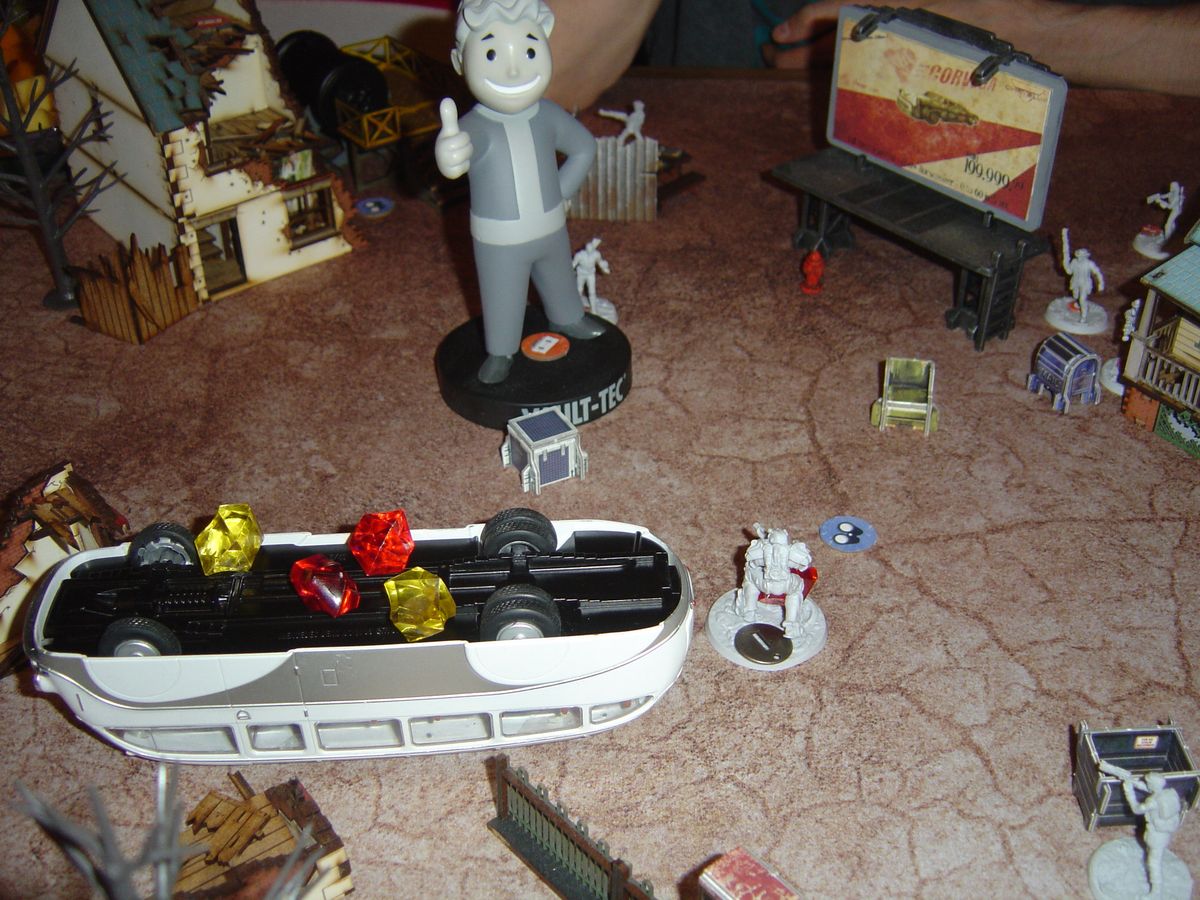 Then the Minutemen and Nora unloaded into the Knight, taking him all the way down to 1 Health! Good, but not good enough. 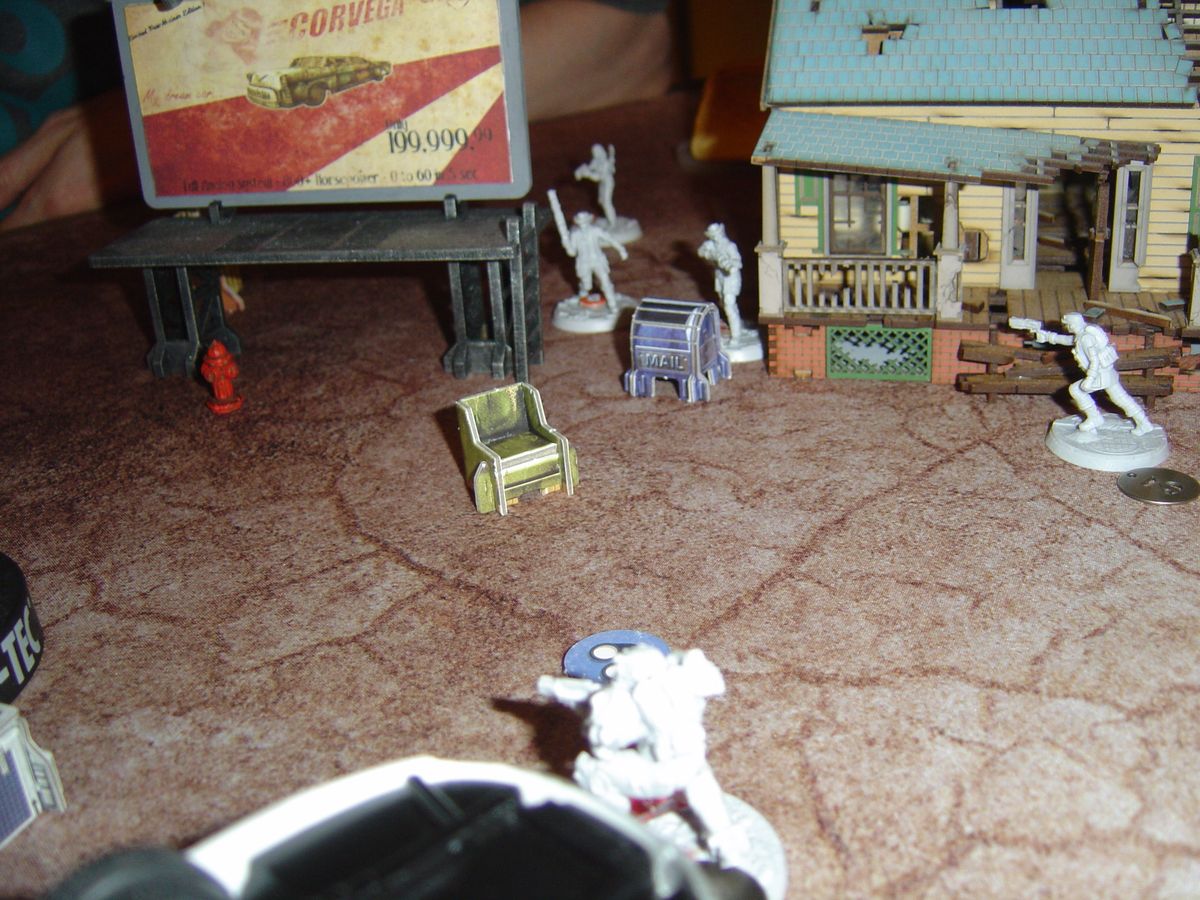 With nobody else in range to take him down, the Knight himself then activated, retaliating with his plasma rifle and seriously hurting a Minuteman.
But then! The burning blaze that was his armor finally caught up with him - he lost his last Health to the flames and thus ended the game in victory for us!

Sure, a few people got injured, but nothing too serious.
In fact, most of the fighting took place on one side of the battlefield, so much so that the two Minutemen we sent out as scouts to engage anyone who got too close to the mine entrance never fired a shot all game. In fact, they sat down and played a game themselves: 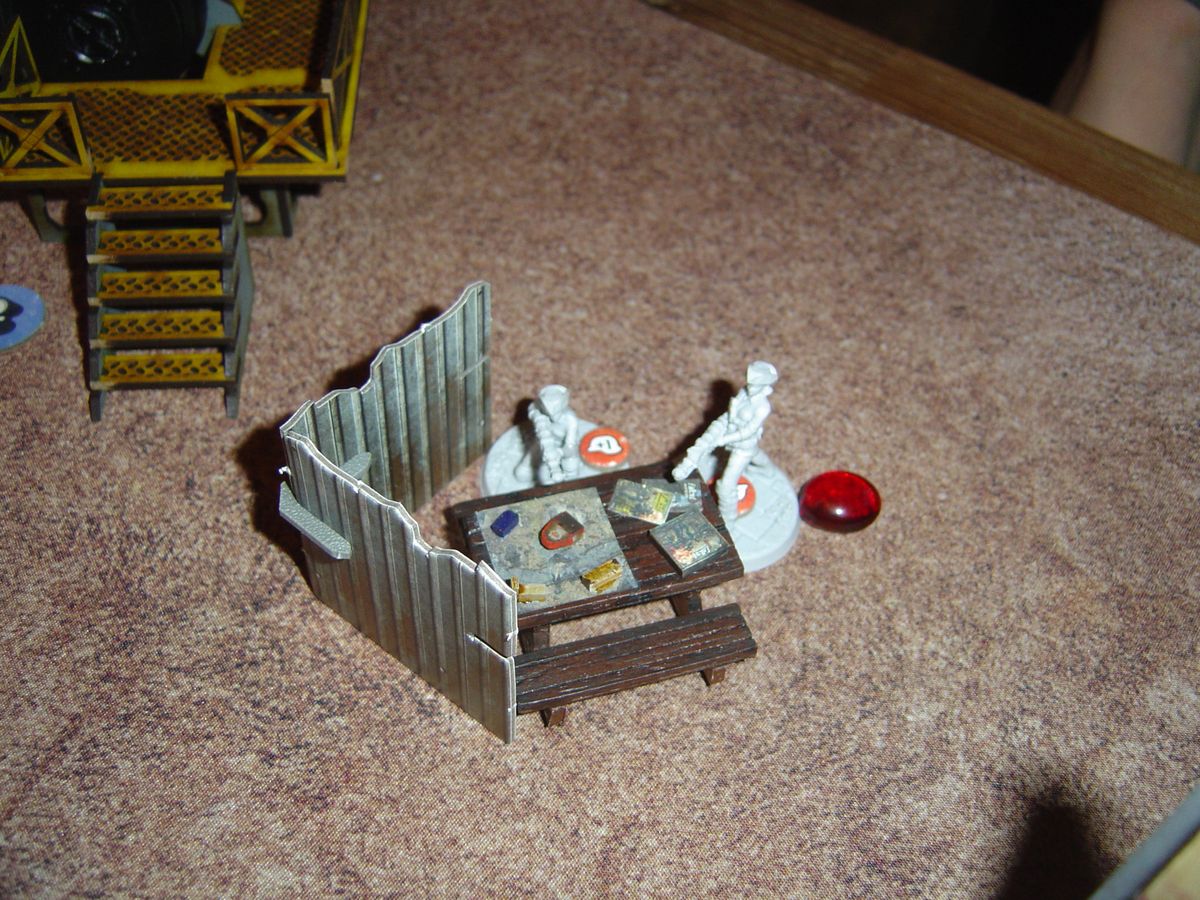 Great to read your write-up. The tiny version of F:WW with rulebooks and terrain map is superb!

And the mini F:WW table was fun to make.
I didn’t tell my friends about that one and instead put it onto the battlefield while setting up terrain before they arrived. They got a good laugh out of it when they discovered it.