After a long time of not playing Fallout, we finally sat down and had a game again!

Keeping it simple, we re-used the lists from last game (which can be found here), so it was Survivors versus Raiders once more. We figured that after the successful raid on the old military base our group of survivors figured out that the Raider boss was actually the guy they’ve been looking for for a while (with our open quest card). Unfortunately, he made a run for it, trying to shake us in an old subway station.

That’s where the game started, with the Survivors trying to take down the Raider boss – in close combat if posible, to finally fulfill our quest – while the Raider boss needed to find the one viable exit out of six possible options and escape the board.

The raiders started with a solid lead, already mostly down the stairwell. They left a small rear guard defending the stairs, but a well-placed missile from Nate took out one oft hem in one hit. The raider’s dog proved more of a problem, engaging Nora in melee and chewing through her armor. A pair of settlers rushed in to help and let Nora slink out of combat to re-join the firefight on the stairs. 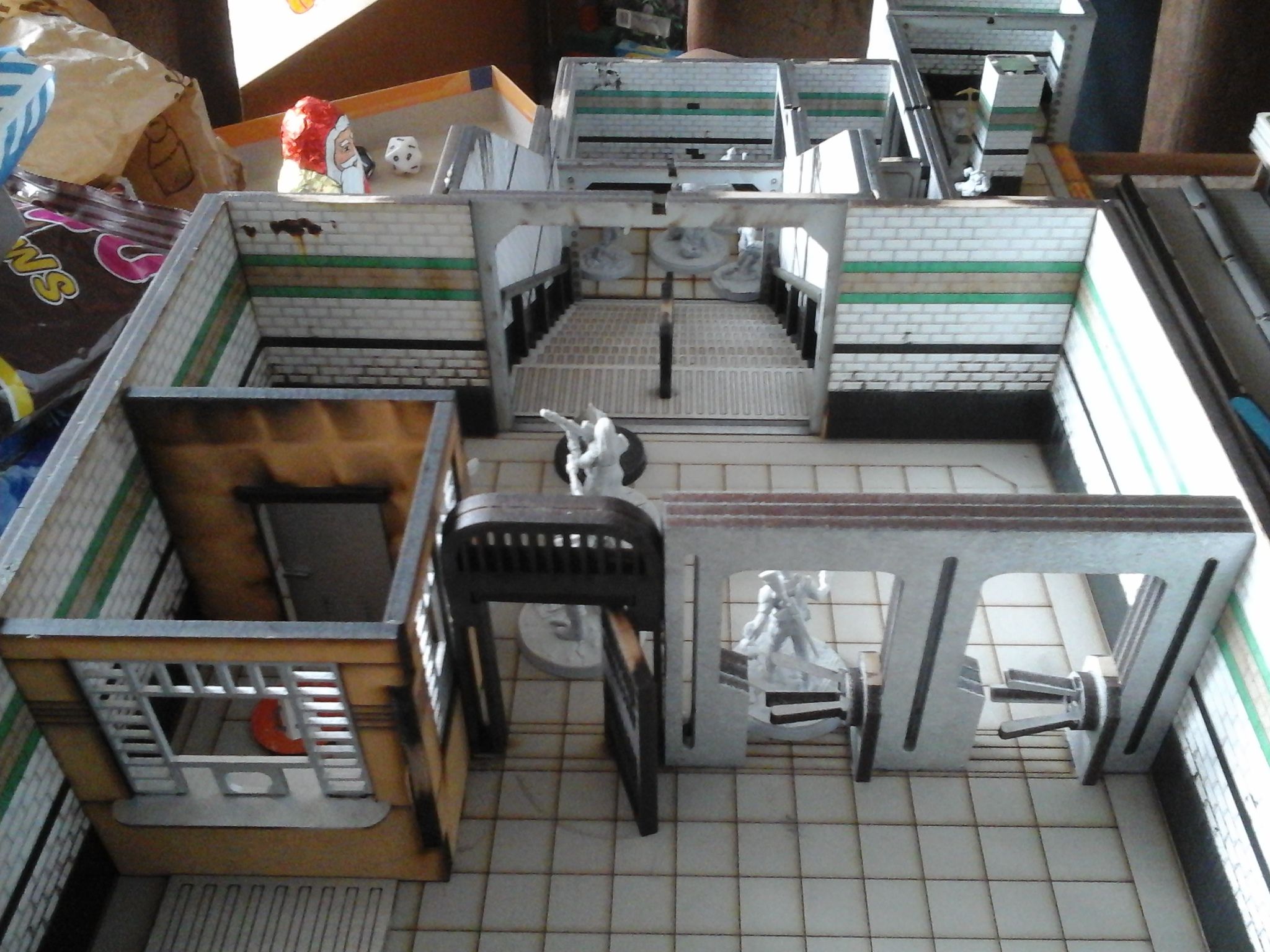 Clearing the stairs cost time … time the raiders invested in setting up a good ambush position while their boss legged it and already discovered that one possible exit was blocked. 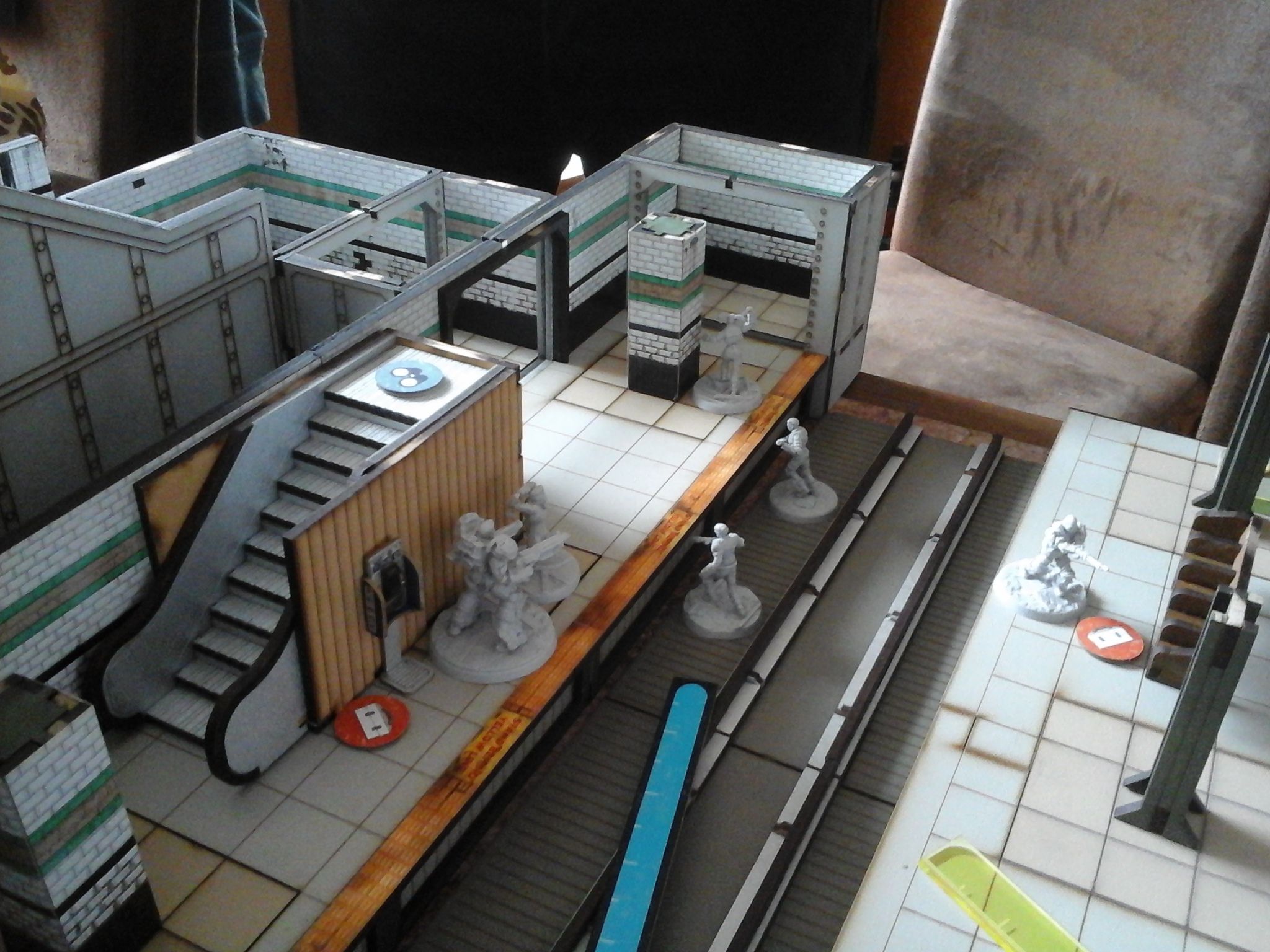 Rushing in, Nora, Nate and Sturges triggered the ambush, suffering minor wounds and getting tied up in combat again. Heroic actions and some good rolls proved vital, especially Sturges with his Stun Baton – stunning raiders helped clear the way for Nate and Nora to run after the Raider Boss. 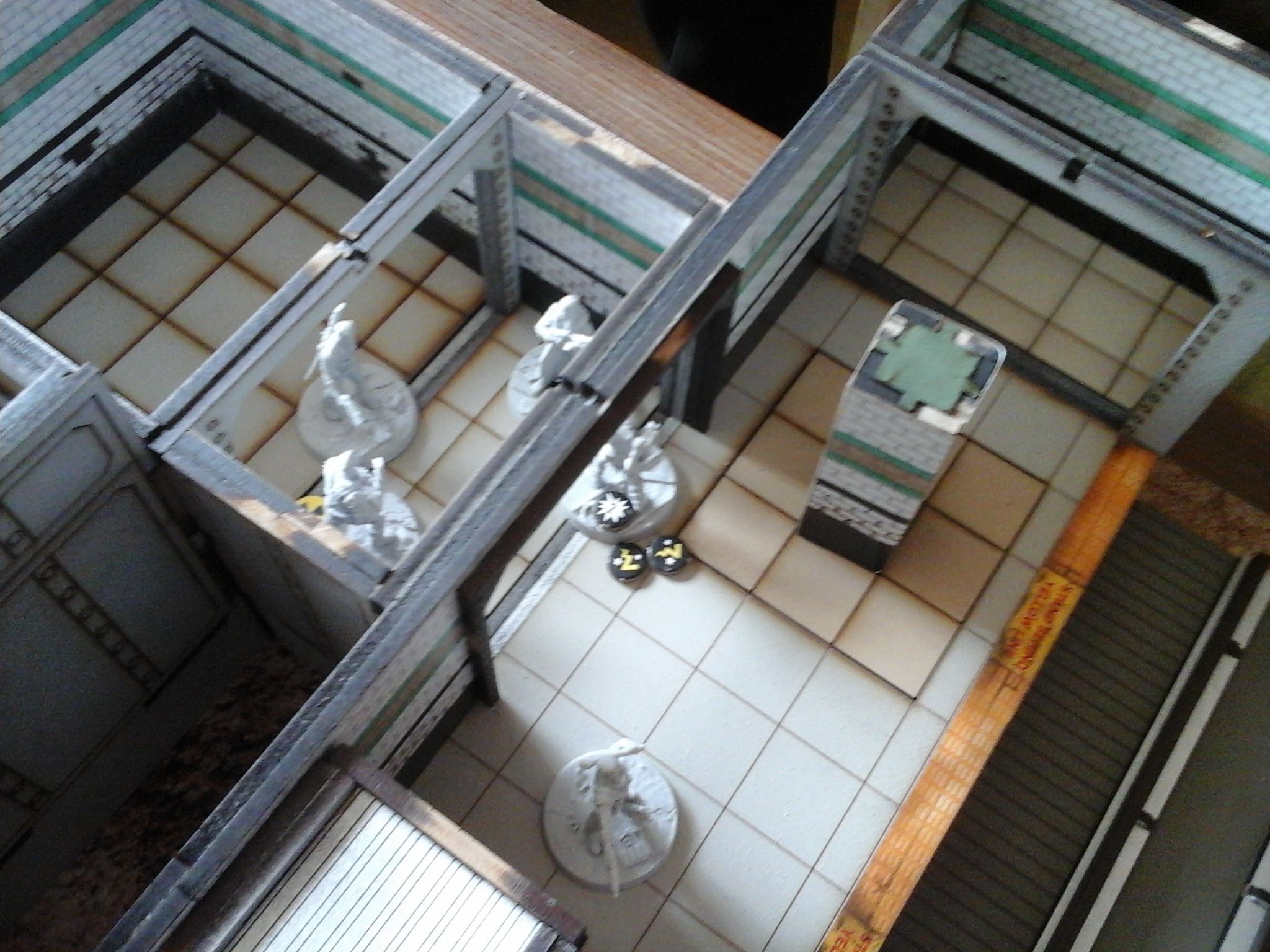 Nora winged the boss down on the tracks, but then decided to run around the far side oft he wagons, trying to head him off should he run that way. 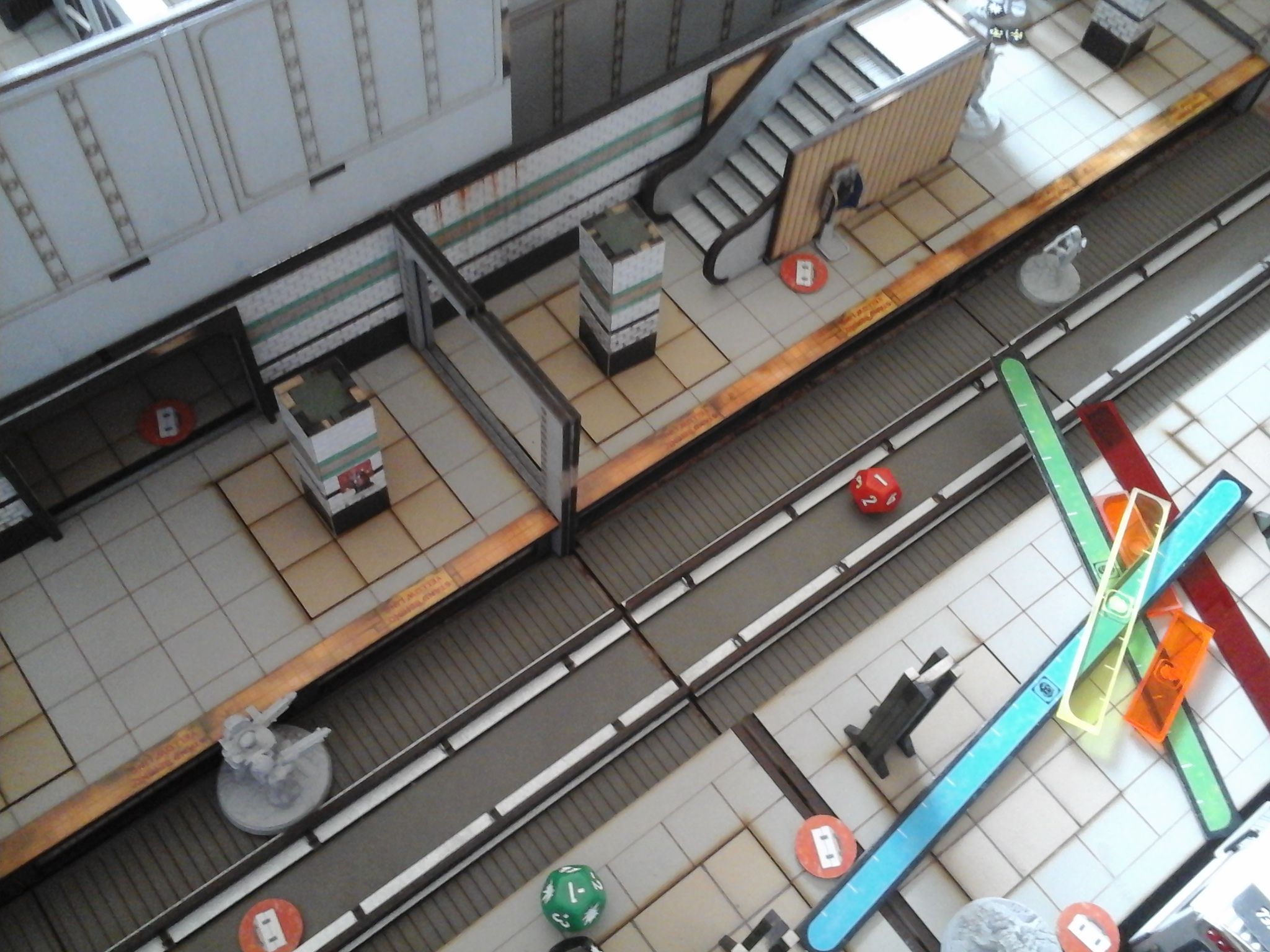 Meanwhile, Nate put in extra effort runing after the boss … but he also picked up a Search marker right on the track. And of course it was a Danger! And the random card pull for it was … 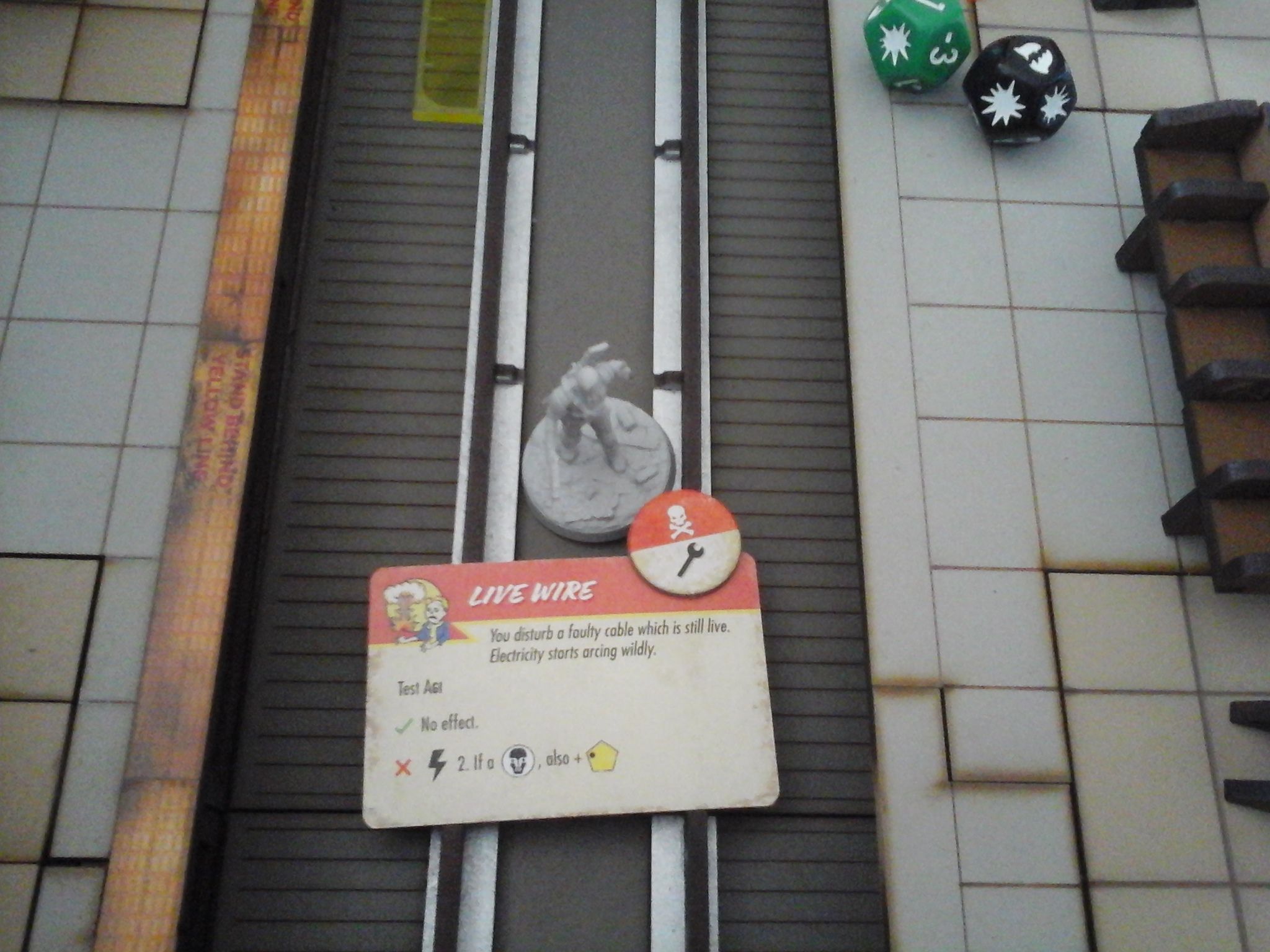 Yup, it HAD to happen!

And yes, he did suffer damage.

But with the swirling melee back in the corridor finally dying down (leaving no raider standing, two settlers down fort he count and Sturges looking pretty rough), the Survivors had the numbers to grab more stuff while trying to stop the Raider Boss (who had excluded another exit by now and was close to examining the third exit!). 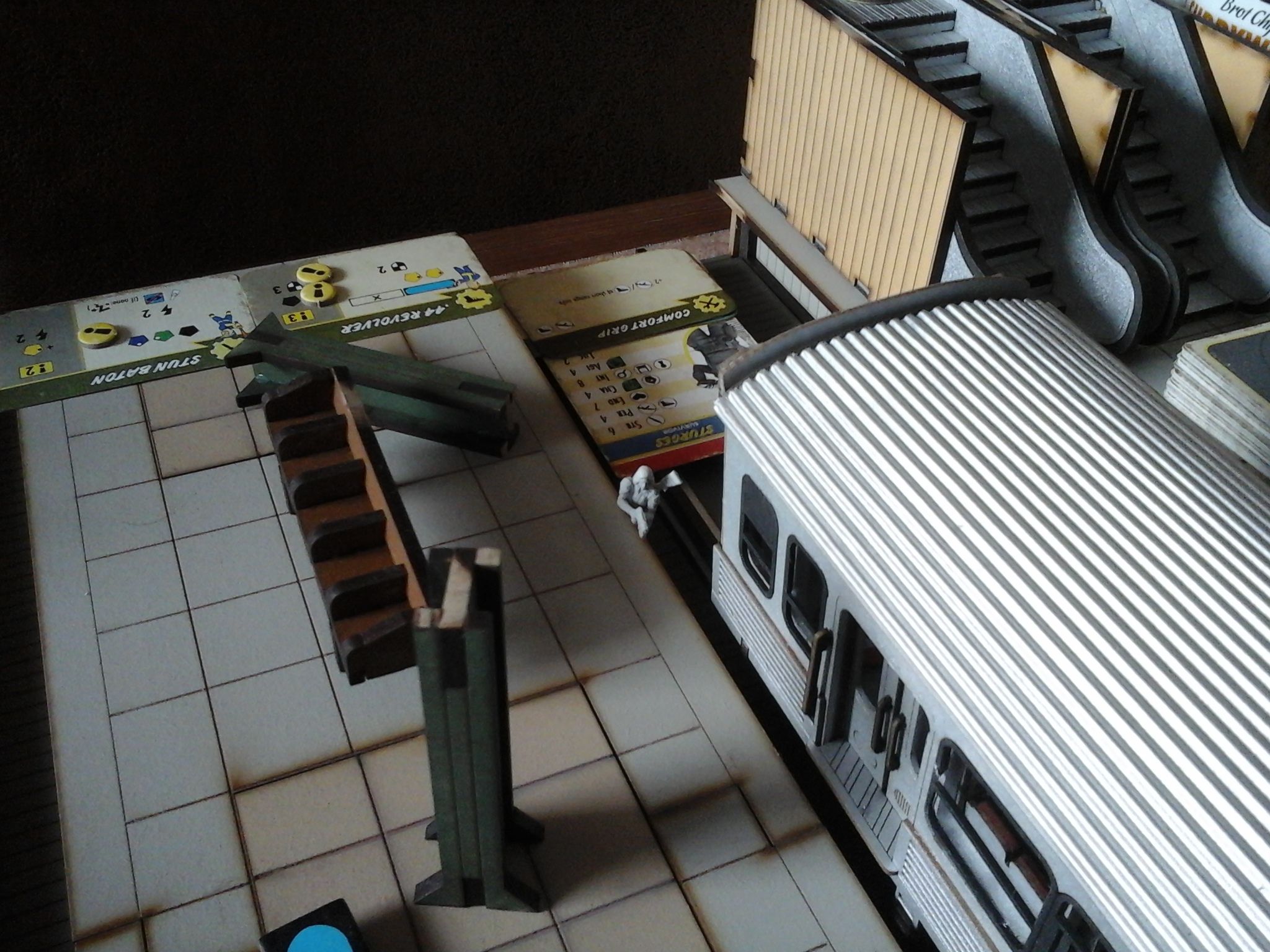 Mere inches away from figuring out whether the third option was his escape, Nate barreled into the back of the Raider Boss, putting his trusty machete to good use. And fortunately for him, he managed to take the boss down before he could retaliate, since the combo of Overdrive and Supersledge would’ve stood a pretty good chance of taking Nate out. 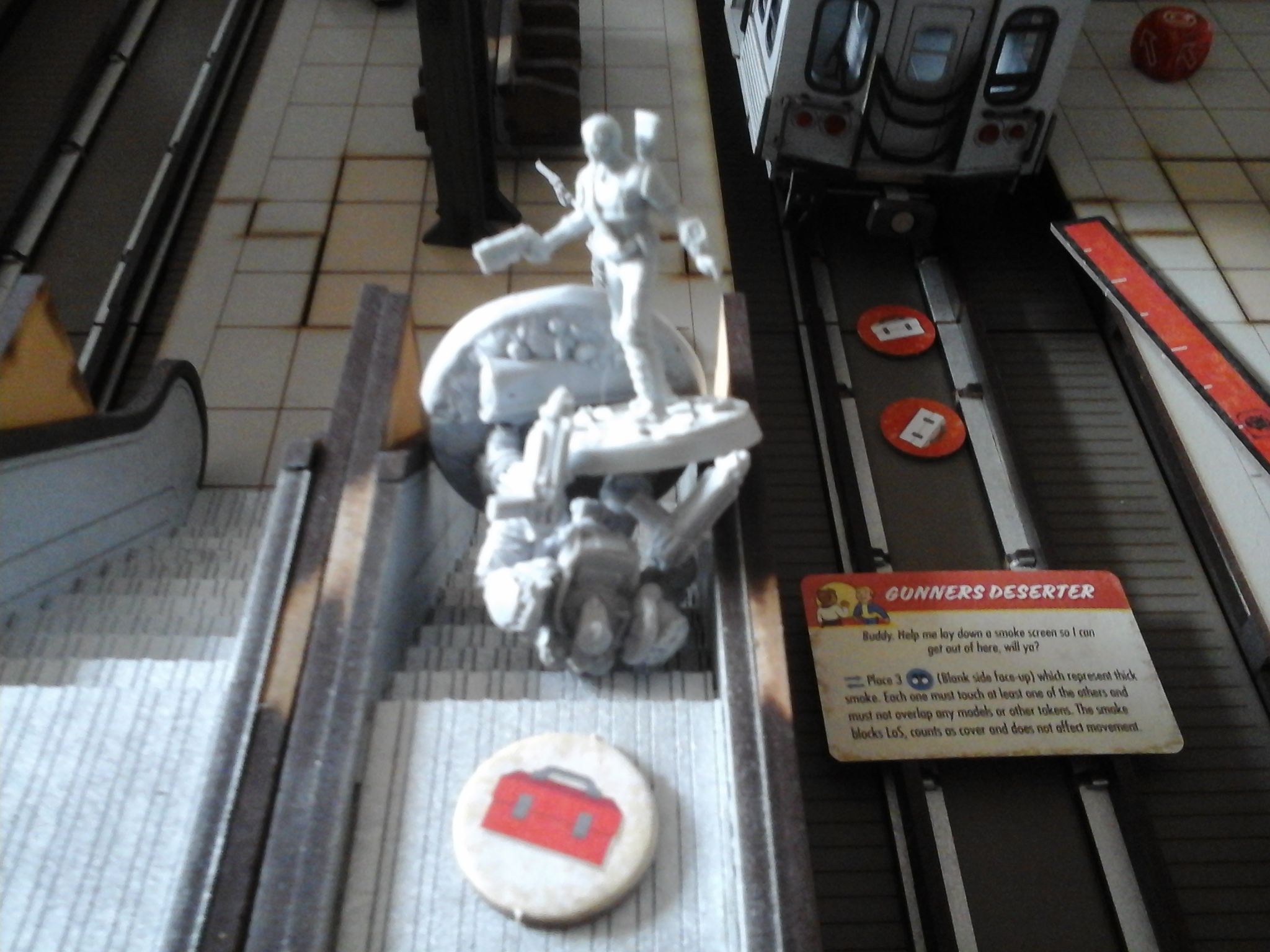 With the game won and the Survivors victorious, we did check where the escape route would’ve been and it was the one the boss would’ve steered towards after the third (which was also a dud).

Not a lot of interesting loot, but we did keep a lead pipe for Nora so she can have a melee option as well.

Sounds like a fun match! And that’s a great looking table set up!

It was indeed fun.

The table set up is the Arklight Metro by Black Site Studio. I literally finished building all the pieces (about 90) minutes before the game started, so the only bit of Fallout theme I added is the Nuka Cola poster on that column in the 4th picture.
I still need to put up more posters and add rubble, dirt and grime to the whole thing to make it look “right”.

It’s a fantastic setup as is, I’m eager to see more. Maybe some Nuka cola machines, lockers or consoles to use as objectives?