Looking forward to getting this soon

So i just got mine about an hour ago.

A thing i don’t recall seeing in the unboxings, i watched.
Is that there was a extra small white box amongst the packing peanuts in the shipping box
the once that had to be re-printed due to a being printed slightly to oversized, for sleeves.

There is a piece of paper in the small box which inform you about the extra deck, which i would had expected at the top of shipping box or taped to the front of the sealed game box, so you could not miss it ^.~

Is that there was a extra small white box amongst the packing peanuts in the shipping box
the once that had to be re-printed due to a being printed slightly to oversized, for sleeves.

According to the latest update on KS (right, or was it a comment from Chris?), the replacement cards will be sent out separately. However, it does seem that some countries get them included in the shipment, which is great!

And… lucky you. I will probably receive my copy last of everybody

Got mine too, a few hours ago. I didn’t expect it so soon usually England > Germany takes a bit longer. I was still worried because of the lack of communication, not getting a tracking, or at least a notification. What times we live in, how spoiled are we. A decade ago this was the norm. ^^
Didn’t have time yet to open it and check for everything.

According to the latest update on KS (right, or was it a comment from Chris?), the replacement cards will be sent out separately. However, it does seem that some countries get them included in the shipment, which is great!

Yes, it was mentioned at first on the Kickstarter in a Update. That would be sent Separately, then later that it would be send together with the Core Game box early shipping.
I think Steve was the one who posted about it, amoungst the Comments that they would ship together instead, a week or so ago.

I was a bit bewildered what that exactly meant, so when i opened the shipping box i made sure to check the bottom of the box thoroughly. in case they were separately hidden inside in box, could have been a very thin pack of card… <.<;

Here’s the Letter that was inside the white Deckbox: 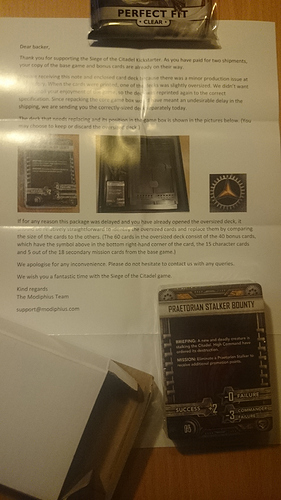 Thank you for supporting the Siege of the Citadel Kickstarter. As you have paid for two shipments, your copy of the base game and bonus cards are already on their way.

You are receiving this note and enclosed card deck because there was a minor production issue at the factory. When the cards were printed, one of the decks was slightly oversized. We didn’t want this to spoil your enjoyment of the game, so the deck was reprinted again to the correct specifications. Since repacking the core game box would have meant an undesirable delay in the shipping, we are sending you the correctly sized deck separately today.

The dek that needs replacing and it’s position in the game box is shown in the pictures below.
(You may choose to keep the or discard the oversized deck.)

If for any reason the package was delayed and you already opened the oversized deck, it should be relatively straightforward to identify the oversized cards and replace them by comparing the size of the cards to the others.
(The 60 cards in the oversized deck consists of 40 Bonus cards, which have the symbol above in the bottom right-hand corner of the card, the 15 character cards and 5 out of 18 secondary mission cards from the base game.)

We apologize for any inconvenience. Please do not hesitate to contact us with any queries.

We wish you a fantastic time with the Siege of the Citadel game.

@Christoffer
I read a handful of Swedes received it yesterday, so it might just depend how north you live in Sweden?, could also be you have a “you were not home” note in your mailbox?
if not, you could still be lucky and still receive it today! ^.~
as I have received a mail packages as late as 18:35. (6:35pm)

The Size difference in the cards looks about 0,3mm in width and 1,0mm in hight.
So if you don’t sleeve your cards you might not notice the difference, might not be a problem with regular sleeves either.
But i expect the slightly over-sized once will not fit inside Perfect Fit sleeves or Double sleeving proberly.

Looking forward to getting mine over here.

I read a handful of Swedes received it yesterday, so it might just depend how north you live in Sweden?, could also be you have a “you were not home” note in your mailbox?
if not, you could still be lucky and still receive it today! ^.~
as I have received a mail packages as late as 18:35. (6:35pm)

Way up north I’m afraid. I would not be surprised if the truck has hit a wall of snow or similar…

Wondering who the U.S. distributor is for this and if we will receive a tracking number or not.

Sorry for the delay, but the last part of Mission 1 is now up.

So happy right now, finally got my copy!

Love the production quality. The vibrant colors of the cards are really great.

I was a late backer for this, based in the US. I paid for multiple shipments, but I still haven’t received any product or even a notification that it has shipped. My first inquiry with support@modiphius.com got a vague ‘it should be on the way to you’ but that was back on Feb 18th. I have sent another request for a more specific update a couple of days ago, but so far have yet to receive a response. Looking at the Kickstarter it seems that there are still a lot of backers who have yet to receive product, but I don’t really see anyone at Modiphius commenting on the status of outstanding shipments, other than a notice that the China facility is back from the holidays and working on the second wave of products.

I have generally not had any complaints when dealing with Modiphius, but this particular product seems to have not gone as smoothly as it might…

Gods of the Republic - I want this game in my hands!

I loved the old Siege of the Citadel, so much so that I still have it.

I’m an old hand Mutant Chronicles fan - I started with the Heartbreaker Core Rulebook and I believe I have them all!

This would be a great game for my Wednesday Night regular Board Game Night at my FLGS!

I’ve never played Siege of the Citadel, but have heard nothing but good things about the original game. I’m still excited to get my hands on it, even though the Kickstarter has been a bumpy ride, and some of the sculpts look mediocre.

I have over one thousand old Warzone figures, and hope to incorporate some of them into my SotC games. I gave the Modiphius guys grief at Adepticon, and it is obvious SotC has been a struggle for them. Hopefully single wave shipping won’t be too far off.