My group & I start the next season of our Dune campaign this week.

Set a hundred years on from the end of the previous House at the funeral for Lord Carlos Sindri the House, and all of Cheruf, is at the cusp of a period of change. The future of their Major House Ezherian is in doubt and in the chaos the new Lady Sindri intends to grasp the opportunity in front of her…

We have had some rough discussions about characters, but this Sunday is when we are sitting down and putting some flesh on the bones of them.

I will keep people updated!

We now have 4 of the characters for the game. We will get a 5th, but the player isn’t able to make as many sessions.
I have given the players an extra point in a Drive & Skill and an extra Talent to reflect advancement.
One thing that developed during character creation was a lot of ties to members of the House whose ancestors had been part of the first game. So fan favourite Kinnard’s family makes a return for example.
An advantage of this being a continuation is that we have a good grasp of the House now which makes it feel more alive from the start.

Lady Kristen Sindri
Cousin to the new ruler of House Sindri, Kristen has just returned from Wallach IX where she had been studying with the Bene Gesserit. She has not yet taken her vows as a member of the Bene Gesserit and with the changes afoot in the House it is unclear as to if she ever will.

Ashton (Ash) Kinnard
The bodyguard assigned to Lady Kristen on her arrival back on Cheruf.
Both boisterous & charming he doesn’t always seem suited to being present at diplomatic events, but no-one can doubt his skills & dedication to his task.
As the nephew of House Guard Captain Neven Kinnard, Ash is part of a long line of loyal servants to House Sindri.
((The character has described him as Jason Momoa if he played Duncan Idaho like he did Aquaman…)

Soren Vriani
The Vriani family has provided numerous Mentats, Accountants and other cold, logical staff to House Sindri over the years. Soren is not one of them, taking more from his Uncle Haval Afshani than his blood relatives.
Likable and gregarious he simply has no skills with numbers or logic. Instead, his talents lie making friends and persuading people. Skills that have stood him in good stead in the House Diplomatic corps.
Despite this he is seen as something of a disappointment to his family, a matter he intends to prove them wrong on.

Natha Osgar
A former Martial trainer to the House, she has taught all of the Heirs swordsmanship as well as many of the troops. Married to House Guard Captain Vincint Osgar she has semi-retired from active duty following the birth of her son 5 years ago. She does still enjoy assisting in the training of her husbands troops by ambushing them in the Ash wastes using skills passed down from her mother.
Upon Cheruf her appearance is somewhat exotic, stemming from her father having worked for the Guild before being reassigned to Cheruf from Arrakis and her mother having come with him. The Guild keen to avoid its representatives being too entangled with the local tribes…
She still has the hilt of her mother’s personal knife. The Blade having disintegrated soon after her death.

The last character has now been created:

Iago Kinnard
A former House Guard Captain, Iago left abruptly almost 20 years ago. The loss of his boyfriend and almost all his command obeying the Strategists order to Hold the Line broke him and he entered a monastery as a means of escape.
With the old Lord Carlos dead he has been summoned back to service, though if he can restrain his drinking habit remains to be seen.

In a very stereotypical manner, we began in a bar. More specifically Ash hauling his uncle, Iago, out of it and to the funeral of Lord Carlos.
(Incidentally I had planned this opening with the death of long lived and well-liked ruler 3 months ago. At least it was easy for my players to visualise it)
After the funeral the new ruler of House Sindri, Lady Jing-Mei requested Kristen to seek out allies for House Sindri. “((The Major)) House Ezharian is failing. Our Grandfather maintained stability, but now it is time for House Sindri to seize the moment and find our own destiny”

With a gathering of Ezharian Minors on Erif IV in a weeks’ time the players spent some time brainstorming possible approaches, making use of the details of all the other Minor Houses of Ezharian that I had summarised (4 on Cheruf, 3 on Erif IV and 1 on the moon Tueris VIIa).
They decided to focus their initial attention on the Nascent House Bakken of Tueris VIIa.

Arriving at the Ezharian retreat on Erif IV the players noticed signs of a recent attack that had been covered up (Damaged trees and repaired buildings). Settling in they set about getting the lay of the land (‘touring’ the grounds, bribing the staff and investigating the training rooms).
While they gathered various bits of information on who was arriving and gossip about who was up and down, Natha found herself in a training duel with someone from House Varrik after watching him training with another. Despite burning her Determination to re-roll the pair of 20’s she got she ended up with 3 successes and still a complication (total of 5 dice rolled, three 20’s!) ending in a victory but with her shield shorted out.
The observer then introduced himself as Baron Kane Griffon and congratulated her on her victory. Thus, gaining the party the trait ‘Respected by the Baron’ and revealing a bit more on the links between Varrik & Griffon.

The session ended just before the evening soiree which we begin with in a couple of weeks’ time. 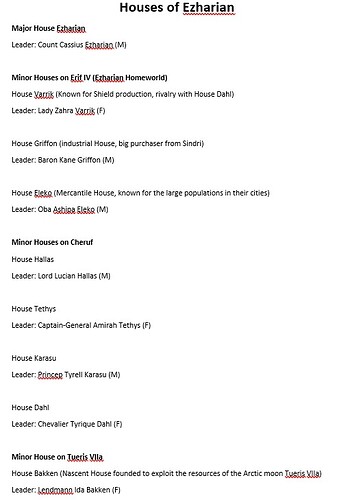