The Cost of Greed

The Cost of Greed, a campaign I wrote involving the Dire Foes packs 1-5, is getting close to release! 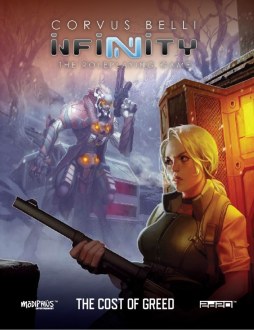 The Cost of Greed

The latest update for the Infinity Role Playing Game Kickstarter dropped the other day, and along with it came a PDF for backers of a campaign I wrote: The Cost of Greed.

I have thought about how to bring the interesting characters from the Dire Foes packs into a roleplaying context. So I really like what I see in this preview (which still has the NPC/PC stats missing, it seems).

Did you play this campaign in your group(s)?

How long did it take to play through?

The stats will be available as a PDF download.

Yes - I playtested each adventure. They took my group about 2 sessions (around 3-4 hours) of play each - but different groups will vary of course. My group likes to chat.

I have noticed positively that for the different locations the question of what kind of weapons are allowed to be carried is adressed.

In Infinity RPG there is something like a (Classic Traveller) “law level” or so missing in the description of the different planets and regions.

It is only to be expected that carrying weapons, especially military grade weapons, around in public places is a thing that should alert the authorities and would be prohibited in most civilised areas in the Human Sphere.

Where as, player characters tend to walk into the next burger grill loaded for bear, wearing military armor, firearms of a type that is obviously for military use, and coming accompanied by an Armbot or other remotes of mass destruction.

As an Infinity GM I’d like to have some more solid information about what is allowed and what isn’t regarding carrying of weapons in the different locations in the Human Sphere.

And, of course, O12 agents might get away with a bit more than normal civilians, but how much more? I don’t see O12 agents investigating in combat armor, carrying grenade launchers and chain rifles through the streets of Cidade Bom Jesus on Acontecimento.

Agreed Frank, in fact, I don’t see Bureau Noir agents seeking to carry anything that is obviously a weapon unless their cover calls for it, or they are about to go on an active Op where body armour and high powered weaponry is called for. I see Bureau Noir agents as people who carry a small palm pistol tucked somewhere discretely.

I’m glad you appreciated that aspect of the adventures! It’s something I always try to consider, especially when the characters are wandering about an orbital or similar, where anything that can puncture the hull is likely to be absolutely forbidden!

And it’s out! That’s my evening’s reading sorted …

I do note that the PDF edition on DTRPG doesn’t seem to have any bookmarks on the file yet, though.

Also, it mentions on p3 that the stats for the Dire Foes characters are available as a free download from Modiphius.com … but I can’t seem to find a link to do so on the site.

I’m going to be downloading this pretty soon myself! Excited to read this through.

I never played the miniature game, but have been collecting and painting the miniatures. I like the idea of getting to use them in the RPG. The dire foes is a cool idea and over time I hope that other mini’s will find their way into the game as NPC’s etc.