If you’ve been watching elsewhere, I’ve been looking at proxy models for Raiders until Wave 2 comes out. This post is going to be about Raiders in general (Along with links to the stuff I’ve found so far for the faction.) but with an emphasis on the Forged.

I think that the Forged would make a really great sub-faction. They could do two packs for them. One for a pair of named characters: Sl ag and Pyro. The other would be a raider expansion pack with six characters like the planned Raider expansion (Could do a couple with flamers, one or two with Molotov, and a couple with upgraded equipment to reflect the upgraded equipment this group usually has)

Now, I’ve been looking around for models that would make passable Raiders for the game. I’ve actually found quite a few that I feel would supplement the upcoming models very well.

So, for the Forged:

These looked like they would have a lot of promise. I figure that with the proper colors they will fit well with the other raiders. This is an all female mercenary band, but two of them have flamers and all five models have a nice gritty look to them that I expect will work well.
http://www.dust-tactics.com/products_d.php?sid=75&id=607

This second batch has two models I think would work well. The male with the fl amer looks great. The girl in the group looks like she could be painted up as a regular raider fairly easily. The man with the pistol I’m not so sure about though. Guess we’ll see what I come up with for that one.
http://www.dust-tactics.com/products_d.php?sid=40&id=280

NOTE: I’m not familiar with the Dust Tactics game, but the models look nice and the scale is listed as 1/48, so they should be pretty close in size.

With these guys, many of the models from the linked faction look really good. I have the following models on order and will share pictures once I have something to compare them with: Tov, Riot Grlz, and Rabble. I think Goliath looks like he’d be fun to play, and the Picketers look like they could be good if you wanted to clip their signs and microphones and replace them with weapons.

Aetherium is a tabletop 32mm miniatures board game set in the virtual shadow of our desperate future. Anvil Eight Games is pleased to present its first game.


NOTE: These come on square bases, so if you pick them up you’ll want to find some round bases for them.

Afterglow has some really great stuff. Love their entire Wastelander range. I picked up their core game along with the Tradesman and Rat 1 characters:
https://white-tree.pl/en_US/c/Wastelanders/511
NOTE: These come with some really nice battlefield markers that might be useful. Their map looks nice, a little narrower than the one we get with the starter, but it looks about as long. Overall their starter box looks like a pretty good value.

The last one I have is Brother Vinni. I ordered the Raider Girl and Nuclear Rascals from their Nuclear Sandlot line.
http://www.brother-vinni.com/shop.htm#!/Nuclear-sandlot/c/5965003/offset=0&sort=normal
NOTE: This line is 28mm. That means they models are going to be a bit shorter than your standard 32mm. If you don’t mind having a couple of models on the table who are just a little shorter than the rest of your models, then Brother Vinni makes some really great models. I just figure some people are shorter than others and use that to explain away the height difference.

Hope people find this at least a little useful.

Do people have other suggestions for Raiders? If so. please share them!

That’s a good bunch of alt raider models, I’ll have to have a look and see if I can find some other’s.
The Afterglow ones look pretty good👍

Just got the Afterglow ones today in the mail. They look a little smaller than Darth Vader from the Legion line, but I’ll assemble them and snap a couple of pictures later so I can give everyone a better idea of what they’re looking at.

Alright, since I got the Afterglow miniatures today, I wanted to share a couple of images of them. My knee jerk reaction was “oops” but after looking at things a bit more objectively I was much happier with what I got. I’ll explain below.

First of all, all three items I ordered (One had a single model, one had three, the other had five. Total of nine models) came packaged the same.
-Luke from the Star Wars Legion game is in the image to show scale.
-Each was in the same packaging, I left one of the blister packages in the image to show it. I really like these kinds of packages because they pop open then snap shut easily again, they’re great for when you’re working on multi part models and want to keep everything together so they are easy to find.
-While it doesn’t really affect you unless you plan to play their game, they come with three cards. One is just an image related to what is inside, one is a company logo card that serves no purpose other than to act as the visual side of the packaging, and the third is a game card. All are made of a gloss card that’s pretty flimsy. They do look nice though.
-The “Tov” character has a bit of plastic that needs to be trimmed between the knee and the end of the Molotov.
-Detail is a little shallow, but looks good otherwise. If you’re a pro painter, you’re going to be disappointed in what you have to work with, the rest of is it’s probably going to be fine.
-There was a little bit of flash that was so light I was literally able to brush it away with my fingertips. No sign of mold lines on any of the models.
-Models came with wooden bases. I’d have been annoyed with this if it wasn’t for the fact I planned to trade them out for round bases anyway.
-The second character in the bottom row is the ONLY multi part model in the lot.

A little closer of an image:

Now, I wanted to show the size differences here because this will matter to most of us:
-I’ve mentioned before that not all minis are the same even when they are supposed to be the same size. This is a really good example of this. In both the first and second image, you’ll notice that the characters are a little bit shorter than Luke (Bet you didn’t even notice in the first two images, did you? I said before that most people don’t even notice a difference.)
-It’s important to note that the Star Wars Legion models have slightly enlarged hands and heads. I’ve also always thought most of them have a kind of stocky figure.

Now, for a little context:

The extent of my 32mm models include Alien vs Predator the Hunt Begins, and Star Wars Legion. That doesn’t give me a lot to compare these with. I used the Star Wars stuff because I didn’t feel like digging out the AvP stuff even though SW exaggerates some elements a bit in a way that distorts scale a little (Others around here have mentioned this as well when I’ve used SW models for scale in the past).
-Overall I’m happy with the models. They look nice without looking great. I know they’re going to look good with the rest of my Raiders when the official models come out, but I think they’re going to blend as stock raiders rather than standing out as particularly special models in the collection.

Once I have the official models in hand (Saw my shipping notification when I got up this morning, so should have models in hand inside of two weeks) I’ll be taking some more pictures of the content I have in order to show how the scale a bit better. Tossing some models on the table that are “Close” will never compare as well as using official ones. I suspect that they’ll look better against the official models, but we’ll have to wait until they arrive to find out for sure.

Saw this and thought it was a good sample of how military themed models can be painted to come off as raider.

This is the sample paint job for the set (I’d have linked more, but a lot of the Brother Vinni models include nudity and I wanted to avoid posting anything like that here.): 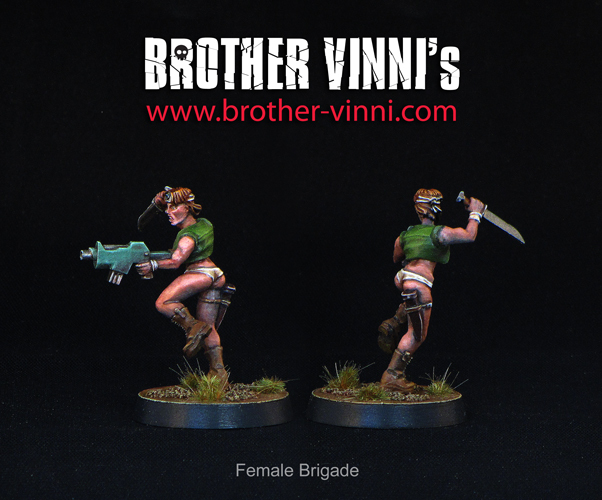 And this is done in more blacks and browns (This is the full set of models, the artist painted black leather tops onto the girls who were exposing a bit of extra flesh.):
https://www.dakkadakka.com/gallery/615777-Female%20Brigade.html

This is basically the same approach I was planning to take with the Dust minis I mentioned in the original post.

Other than the Forged Leader having a set of Raider Power Armor, how different do they look to the mohawked raider look? I can’t remember. There are a LOT of raider models out there in different ranges.

I think that Forged are statted the same as regular Raiders in Fallout 4. They do however tend to have better armor and weapons which helps to set them apart. Flamers, Super Sledge, and Molotov are all pretty common. Other than that, welding goggles and hard hats seem common in addition to the better armor. And a lot of them have soot smeared on their faces.

Since my models arrived today, I wanted to take some new pictures

First image isn’t really great. But left to right you’re looking at: Afterglow Miniatures, Fallout Wasteland Warfare, and Dust Tactics. Honestly, it scales SO much better with the official models than the Legion ones I was using previously were.

Second image turned out much better. I kind of tried to line up all their feet even so I could get a more accurate look at the height difference. Left to right: Dust Tactics, Brother Vinni, Fallout Wasteland Warfare, Afterglow Miniatures. Personally, I think the whole lot scales well together.