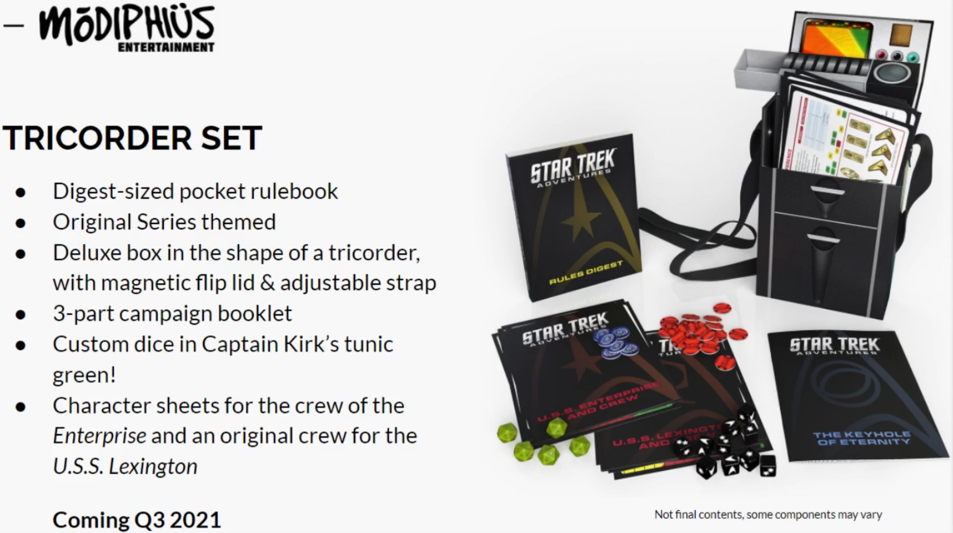 Very excited about this; the Original Series “Rules Digest” is something I have been wanting for some time. But I wonder, will it be:

What playable species will be included? Please no Denobulans or Trill — yes, later canon establishes that they would have been around at the time of the Original Series, but they are aesthetically incongruous with the Original Series, and just speaking for myself, I have no interest in having them included in my Original Series-based game.

Agreed re: TOS era only and no Denobulans! Some games can add them from the core rules if they want.

Its a 300 page book. That detail is mentioned here.

Closer to #1. It’s a 304-page rules digest containing the full ruleset; it’s the Starfleet core rulebook trimmed down and reformatted to the TOS aesthetic, plus the rules adjustments from the Klingon core. The 3-part campaign wasn’t specifically written to teach the game like the starter set campaign was.

Denobulans and Trills are in the digest, as are Humans, Andorians, Tellarites, and Vulcans.

Can we change your mind on the Denobulans and Trill? Is it too late? Can we TOSers suggest TOS-friendly alternatives? I only ask because I am only familiar with the 3 seasons of TOS, and I wouldn’t know how to play or GM those other species without watching other shows (which don’t interest me). Kind of odd, IMO.

Well, honestly: If you don’t want to use them, then just don’t use them. I bought the Alpha Quadrant supplement despite the fact that I wouldn’t know how to play or GM Aurelians (or Edosians, for that matter). TAS is, mildly put, not my favourite flavour of Trek.

Canonically, Denobulans are part of the TOS era, since they were present/known in ENT (whether you want to watch it or not). The same holds true for Trill, as established in DS9. And if you don’t want to watch the shows, wyh not simply create some alternative background? Everyone of us plays in their own group’s headcanon, after all.

However, since it’s an updated Core Rulebook streamlined for TOS, you might argue to leave out Bajorans and Betazoids out (as they’re not part of TOS/TAS/Movies eras) and replace them with Aurelians and Edosians (with maybe the addition of Efrosians and/or Caitians) as those were present in TAS (and the movies).

It’s ok if you don’t like the Denobulans or Trill. Don’t use them, or leave it to any players who want to play them. They’re in the canon setting during that era. If we’d have had the Disco license when we were developing the tricorder, I would have added Saurians and Kelpiens too. But we didn’t. Have to save them for another supplement.

Can’t please everyone, so we did the best we could. Hope you check it out either way.

Well, @Modiphius-Jim, @Falconer actually has a point imo regarding Bajorans and Betazoids as they’re listed as TNG-only in the Core Rulebook and, thus, were not present during TOS-era.

(They did not specifically mention them and were a bit… blunt in making their argument, I’ll give you that.

Any chance to have those changed for some of the species from Alpha/Beta Quadrant that were present in said era? That would actually stress the “focussed on TOS-era”-thing, imo.

(Oh, and, yes, I will definetly check it out either way.

Betazoids and Bajorans aren’t in the digest. The six species I named are.

Final layout was locked down months ago due to long production lead time.

Final layout was locked down months ago due to long production lead time.

Oh, well, I suppose you won’t allow me to go over all the fine books with a marker, are you?

Sorry, I overlooked your enumeration of species. And I understand that you did not want to mix in species from the Quadrant books.

Anyway, which version of the reputation system is in the book? The new one of the Klingon CRB I love so much, I suppose? And also the updated rules on character development, all with personal logs?

If you want to buy them all, mark them up to your heart’s content. I’ll chip in the Sharpies.

I had just enough time to update the tricorder digest from the original advancement rules to the alternate system presented in the Klingon book. Revised for Federation rather than Klingon, naturally. Not a direct cut and paste.

Many many thanks Modiphius! The Tricorder Set is an answered prayer! I love the STA system, but being a TOS fan I lamented that STA’s visuals were done predominantly in the TNG / LCARS style. Bravo!

Was there a date mentioned for preorders and I missed it, or is that unknown at this time? I’m very interested in getting my hands on this product as the original show is by far my favorite.

Just looking for more information about this product. I’d love to get a copy when it comes out!

I second this request, especially since I asked almost 7 months ago and never got a reply! I’d probably buy at least 2 copies!

The latest info I’ve saw was in this video of mid-of-july. Check it out!

Do you have a time stamp for the relevant portion? The video is an hour long.

Are there printer-friendly versions of the character sheets (esp. Lexington crew)?