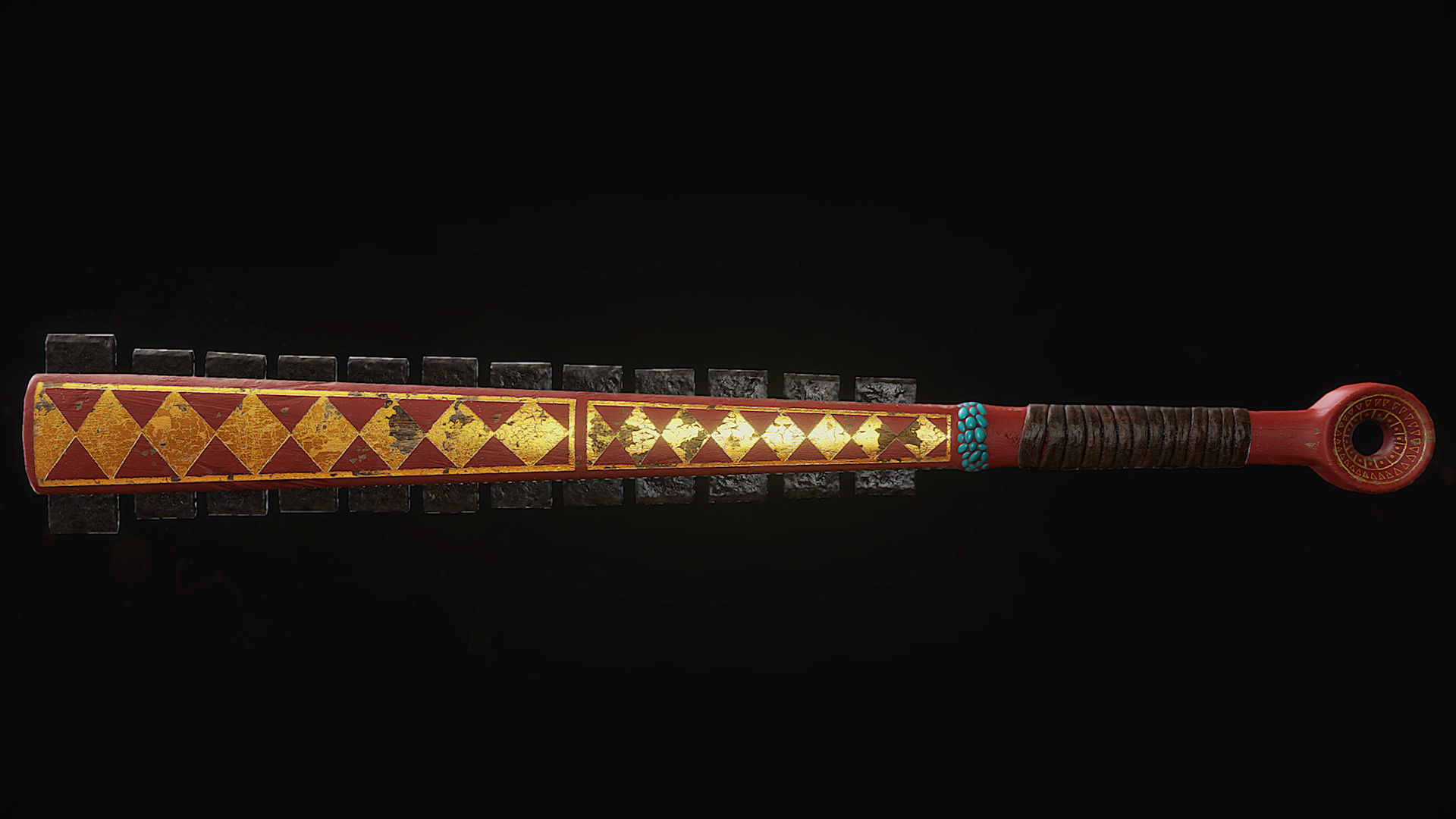 I am working on some culturally specific weapons … Here are the stats I decided to go with for a Macuahuitl. The characters in this adventure are going to be under mental pressure from just about every way possible, due to the fierce nature of the locals and culture.

The weapon itself can cause a lot of mental pressure

I feel like I’d want to make it a hybrid between an axe and a club. Maybe Stun and Intense?

Compared to other weapons that can we wielded single-handedly (albeit by characters with Brawn 9+), 5[CD] damage plus Fearsome and the “killer quality” Intense is a bit too much, I find.
Most single-handed weapons are at 4[CD], the broadsword has 5[CD], but only the Parrying quality.

Even at 4[CD] such a weapon would most often be used by a Brawn 9+ character, so there will be at least +1[CD] damage bonus. At 5+[CD] damage, this weapon is very often causing a wound plus - due to Intense - a second wound. So a PC might only withstand two hits, before being taken out or outright killed.

As written in the opening post, this weapon is better than any axe, even adding the Fearsome quality (although I don’t see why this is causing more fear than an axe or a sword).
Fearsome is a thing that is caused by inflicting pain - like the whip in the core book. But, of cause, all weapons cause pain on hitting someone.

In the Conan source book that must not be named, the Urumi is a weapon that has the Fearsome quality, because it basically is a bunch of thin swordbladed whips, that wind around any defense - and endanger its wielder quite a bit:

The flintstone wooden “sword-club” above does not seem equally frightening to me.

Looking at the construction of such a pre metal age weapon, this has to be Fragile, it will shed its flint shards with every hit, and it is less solid due to its wooden frame holding those shards than a massive club.
It is more in the middle between a club and a two-handed maul.

And it doesn’t have the weight at the end to justify the Intense quality a heavy axe gets.
Due to its non-metal and fragile construction, I would expect it to be less effective than a battleaxe.

Considering the historical use of such a weapon, Knockdown and Stun would be most fitting as qualities, as they were used to make prisoners - later to be sacrificed in bloody rituals - not to outright kill the opponents.

If I were to introduce such a weapon in one of my games it would be modeled as:

All subjective to the type of adventure one is trying to implement, and of those who are using it. The image I am trying to establish with the fearsome quality is that of a weapon that literally tears and gouged horrible looking wounds out of one’s flesh, also taking into account the fearsomeness of the warriors using it. Its not meant to be a historically accurate. Mind you, one the article’s I read about it, describes it literally as the Fearsom Weapon of the Aztecs. The weapon is designed to maim and disable, and I am using the fearsome quality to do just that due to panic inducing wounds.

Mind you, I think I will add fragile. But when reduce to ZERO it becomes a club.

taking into account the fearsomeness of the warriors using it

You could give them a very high Threaten attack option.
That could work very well in combination with a melee attack: melee attack as Standard Action, then for only 1 Momentum for Swift Attack spend by using a different “weapon” the Threaten Attack, which could cause quite a bit of mental damage. (In my Conan game yesterday, that worked quite well against a typical “combat monster” player character with maxed-out physical combat stats, but decidedly weaker mental resistance.)
And maybe some Doom spends to enhance that, of course.

After watching more videos, and reading even more I feel it’s almost required to add fragile. I also changed out intense for vicious.
So, when it reaches 0, it will then revert to a club.

Hey, everyone. I believe the blades of a macuahuitl are made of obsidian glass, not flint stone. This makes them extremely sharp, but also makes them pretty useless against (for example) the breastplates and chainmail of the Conquistadors. I don’t know how to model that in Conan 2d20, since there isn’t a Quality that reduces a weapon’s effectiveness against armor.

When the blades were intact, the weapon was used as a (terrifying) low-tech chainsaw, being drawn backwards after the initial blow to slice through objects even as thick as a horse’s neck (several accounts from the conquest of the Aztec Empire describe this). With missing teeth, it was more of a subdual weapon, so I’d model it as follows:

Fragile (Special): When the weapon loses two combat dice, it becomes a club with the following properties: Reach 2, Damage 3

, Unbalanced, Stun, Knockdown. It no longer has its original Qualities.

I absolutely agree the Fearsome quality doesn’t make sense, except in the context of setting where the weapon has a terrifying reputation, which is what I assume OP had in mind. Still, I don’t see why it would be scarier than any steel weapon.

The only reason I wouldn’t suggest Fragile is that other stone age-level weapons, like the club or staff, aren’t Fragile in this game.

Continuing to look at other weapons that already exist in the game, there are already a number weapons combining Stun and Knockdown. Personally, I don’t see the point in designing a new weapon that already does something covered by weapons in Core. Your proposed stat block is basically a mace with an added CD but made worse by the addition of Fragile.

I think a lower CD, combined with Intense, adequately portrays a weapon that would be devastating against unarmored foes, but thwarted by armor. I would add either Stun or Knockdown, but not both, as the center of balance here would be somewhere between that of a mace and that of a sword. It would be top-heavy enough to deliver a lot of percussive force, but not to the same degree as a mace.

Conquistadors took this weapon very seriously. There are tales of the Aztec warriors decapitating horses with them. The stone embedded there isn’t flint. It’s obsidian, with an edge as sharp as a scalpel.
I agree that fearsome is an odd quality, as ALL weapons could probably be argued to have it. Perhaps only after you’ve SEEN it decapitate someone does it gain that quality…

I agree that fearsome is an odd quality, as ALL weapons could probably be argued to have it. Perhaps only after you’ve SEEN it decapitate someone does it gain that quality…

Seeing someone decapitated, that is what a Threaten attack using the Displays “Dead Man’s Stare” or “Stain the Soil Red” are for. You kill a competent opponent or a handful of lesser opponents and you become “fearsome” yourself.

Having a weapon that deals a lot of damage helps in achieving the requirements for those displays, of course.
If a weapon causes a particularly messy death, it might give some Bonus Momentum on such a Threaten attack, though.

Really, I find the whip odd that it has fearsome. But qualities are added to weapons for narrative effect. I could give a large gnarled stick Fearsome if I choose to desire.

But that won’t jive with my setting.

But for the purpose of this, in my setting where the players are, things are so Exotic, and things work in such Mysterious ways. Where even wounds are so ghastly they can cause wounds that effect more then just the body, but even the soul.

Even the headdress worn by the brown skinned warriors, so terrifying they even add momentum to the threaten attacks.

It’s going to be one of those settings…

I think whips have Fearsome because they make a loud noise? It’s basically a Threaten attack with a little nonlethal damage added.

Even the headdress worn by the brown skinned warriors, so terrifying they even add momentum to the threaten attacks.