CROM! another post this morning with a new custom weapon. 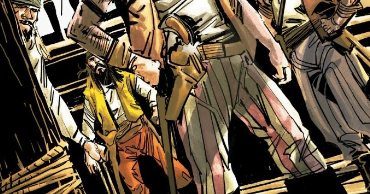 Firearms in the Hyborian Age? (and some 2d20 stats)

Conan and guns!? RIDICULOUS! Or is it?

You continue to have interesting timing with those articles. First the jungle crawlers, then the boar of Nergal and now this

I like the stats, 6cd seems too much with bonus from high having attribute. Did you playtest it?

Not been playtested, built to flavor. The Arbalest is 5cd which is where the 6 came from, although I gave it a higher piercing. But also removed piercing.

I visualized it as a slow firing slightly harder hitting arabalest, with a mental aspect of the fire stick being shot at you. Also has a lack of volley much like the Arbalest. Damage wise I think it’ll be hard hitting, but not out of place compared to something like the Bossonian Longbow.

Videos like this do not change my opinion. Apart from making it shorter range, but this is a pistol vs a rifle.

Of course it’s a custom highly optional weapon, lower the damage or whatever you need to do to have fun!

Definitely think Conan can work with black powder weapons. In fact, I’ve been planning to use the Conan 2d20 rule set for an Early Modern Period home brew of mine, inclusive of firearms.

I’m simply reskinning arbalests. Might add fearsome, might not. Certainly, there was a broad period where firearms were both inferior or simply equal to crossbows and you’d find them both on the battlefield.

I only think fearsome is appropriate when they are in a setting they don’t really belong, where the fire, thunder and smoke they belch is akin to sorcery.

Fearsome is spot on!

Balanced weapon. The disadvantage of it being a SLOW weapon means that it can’t be fired several times in a turn.