So another thread got me thinking if it was possible to whip up a custom card from scratch. I’m not a hundred percent happy with the results. I cant get any of the correct fonts and only could manage half the assets being as clear as i like. Still what do you all think? Any thoughts on what the fonts are and where to find them? Tips or tricks for Photoshop/Gimp? What cards do you want to see next?

Its my first try at Sculpty too so forgive the roughness i didn’t know you could smooth it with Alcohol till after i baked it and this stuff doesn’t take well to sanding.

I’m of mixed feelings when I look at this, . . . On the one hand, I’m a purist and this screams of blasphemy. On the other, it’s pretty awesome.

Seriously though, love it. It looks great.

Hahahaha, that is amazing!

I haven’t tried using sculpty myself, but it looks like you’ve done a good job!

If you’re after something that can be sanded, milliput doesn’t need to be baked and can be sanded quite well once hard. I’ve found mixing it with greenstuff creates a really good material for sculpting minis, with both the hardness and ability to be sanded of the milliput, as well as the greenstuff’s ability to take and hold fine details. If you try it make sure to mix each component separately first though (ie, mix together the two parts of the greenstuff, mix together the two parts of the milliput, and then mix the greenstuff and milliput together)

Ooooh, Littlepip. Nice!
Are you planning on making Velvet Remedy, Calamity, SteelHooves, Xenith and Pyrelight as well?
Maybe even Blackjack and her crew?
Or Puppysmiles?

I have minis for Puppysmiles, Ensign Sidekick and Whisper/Psychoshy on my shelf. Painted those long before F:WW came out, but I can use them here now.

@Alaiteir I’ve heard of that combination before, though your selling it much better kinda want to try it now. I think i started with sculpty because being inexperienced with sculpting i wanted an unlimited working life before i was set.

@NoshrokGrimskull I wasn’t expecting anyone to recognize any of this honestly. Velvet was baked with LittlePip. Calamity is in progress. Im struggling getting the hat right. Im not sure im skilled ennough to do Steel Hooves. Zenith, and maybe Homage i could do Blackjack and Glory could be fun. Do the abilities on LittlePip feel right to you?

Well, I wasn’t expecting anyone to come up with this either, so I guess that makes us even.

I love that you’re doing this though. My hat is off to you for custom-sculpting the minis yourself. I went the easy route with my Harmony Squad and Wastelanders (long story) and just picked readily available minis that looked the way I envisioned a certain character, then painted it appropriately. (I can show some pics if you’d like.)

Fallout Equestria is one of my favorite fics. But Fallout Equestria: Pink Eyes I like even better - and the fact that you don’t mention Puppysmiles at all suggests to me that you haven’t read it. You should remedy that. Puppy is awesome.
“Hi, I’m Puppysmiles! Have you seen my mom?”

As for Pips stats and abilities:
Stats look fine. Maybe an extra point in AGI, seeing how she can take a serious beating? This would also make her even scarier with Little Macintosh, which I feel is right.
Abilities … Am I right in assuming that Predisposed and the second part of Telekinesis apply to enemy models? If so, the wording should be a bit clearer, but otherwise I like it.

I’ll be honest the only time I’ve seen any Pony related stuff is watching the TV show with my niece a couple of years back. “Fallout Equestria” has me curious now!

And, yeah, anyone who scuplts their own minis has my respect!

So the second part of Telekinesis is intended to keep near by friendly models safe from Scatter effects missed grenades and missiles. I had a real hard time wording it. The aura effects friendly models. When a friendly is targeted by a weapon that scatters, the weapon looses scatter and misses normally? Thats my intent anyway.

Predisposed is meant to make her more likely to suffer from withdraw when using chems since they had trouble with addiction in the book.

I would love to see your models! I might even try and whip you up a few cards so you can play with them if you like.

I have actually red Pink Eyes, just not sure how to make the clear helmet? Also giving her rules would be … hard.

Yeah the working time on greenstuff and milliput is definitely something to take into account. I’ve found working on sections at a time, in blocks of about half an hour or so, is the way to go with them. Ie, sculpt a basic shape or skeleton in the morning, then come back to it in the evening once it’s mostly hardened and start to work on the detailed sections. I’m always happy to give any tips or answer questions from my own experience if you want them

So the second part of Telekinesis is intended to keep near by friendly models safe from Scatter effects missed grenades and missiles. I had a real hard time wording it. The aura effects friendly models. When a friendly is targeted by a weapon that scatters, the weapon looses scatter and misses normally? Thats my intent anyway.

Sounds a bit clearer to me.
And I think I would add Attacks made by friendly models within the Area of Effect may roll twice for Scatter and choose which result to apply.
Just so we can have Littlepip guide grenades a bit with her magic.

Predisposed is meant to make her more likely to suffer from withdraw when using chems since they had trouble with addiction in the book.

I actually thought this was something else entirely … my bad.
As is, I’d re-word it to:
Predisposed: When checking for addiction, the Light Bringer must re-roll a successful check.

I would love to see your models! I might even try and whip you up a few cards so you can play with them if you like.

First, a small part of the Harmony Squad. (i.e. a bunch of minis I painted in the colors of characters from the show, to use in skirmish games like Necromunda and such.) 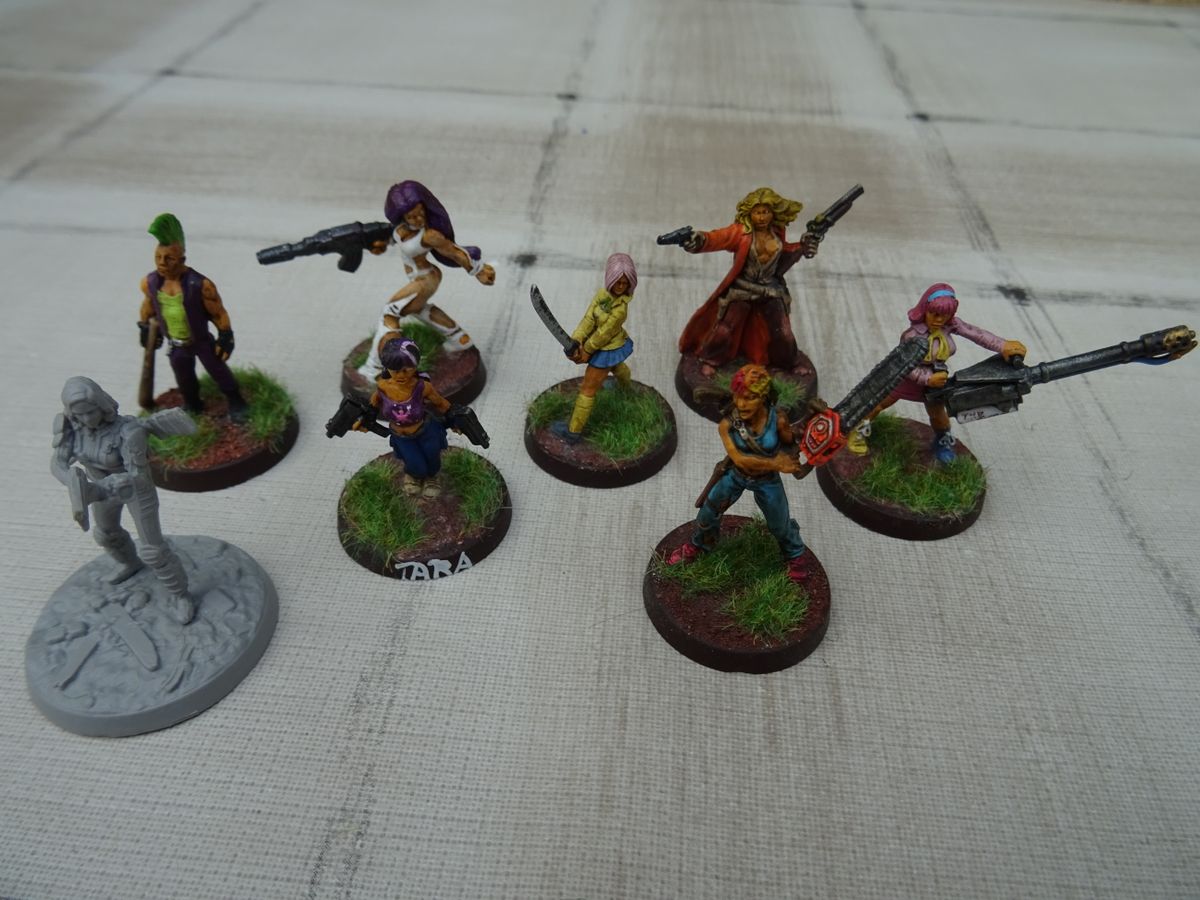 Left to right, that’s Wes, Tabitha (back), Tara, Andrea, Jaqueline (back), Ashleigh and Diane.
Nora is there for scale.

Next, the three minis I’ve finished so far for the Wastelanders. (i.e. more pony character color schemes, but this time based on the characters from the various Fallout Equestria stories.) 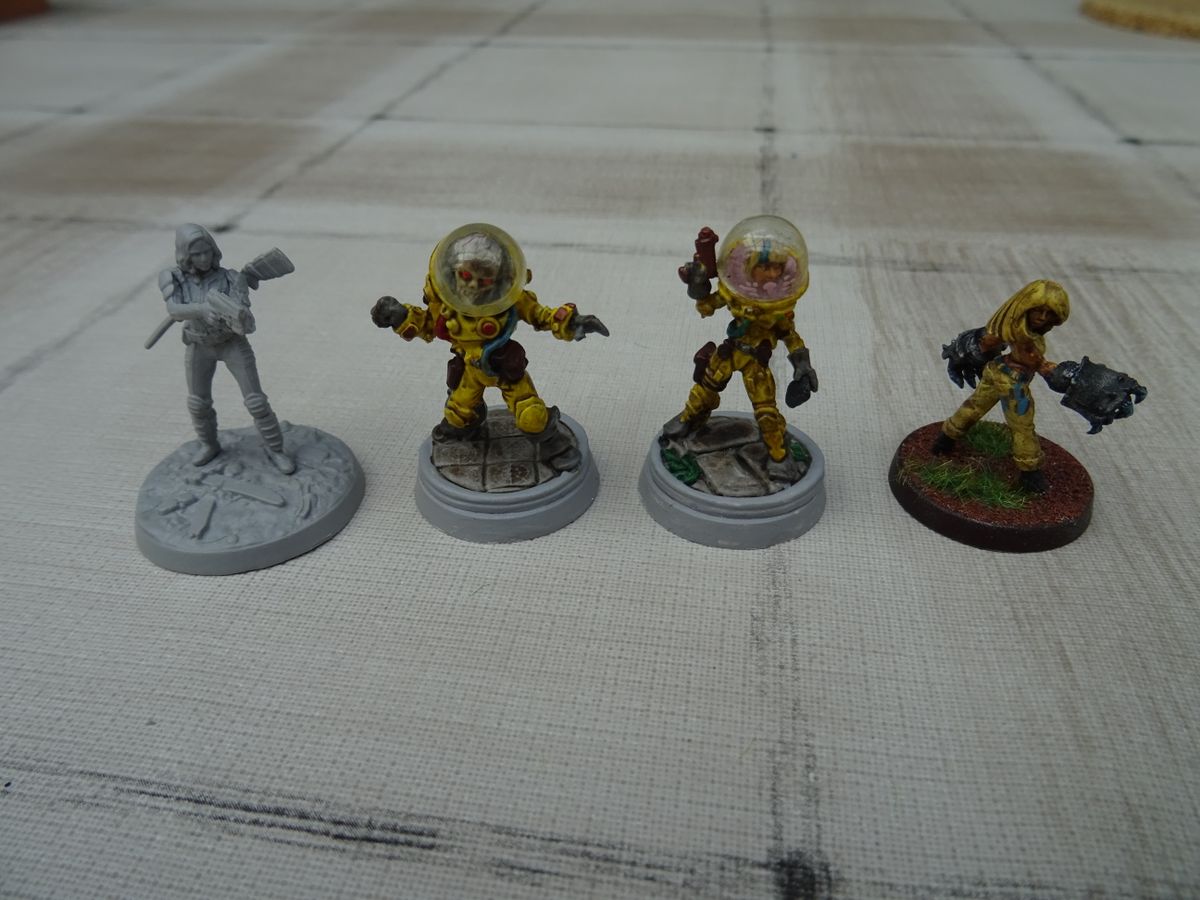 Mind you, these pics are just quick snapshots and not really up to scratch to use in a character card, but I do would like to see what you could come up with.

I have actually red Pink Eyes, just not sure how to make the clear helmet? Also giving her rules would be … hard.

Well, as you can see above, with a non-pony mini it’s not impossible to have a clear helmet. Added bonus was that the mini already had a “toy lasergun”-looking weapon. And adding a rock to her other hand was easy.

If you absolutely must use a pony, then SLAP Miniatures has (had?) a line of pony minis, including this one: 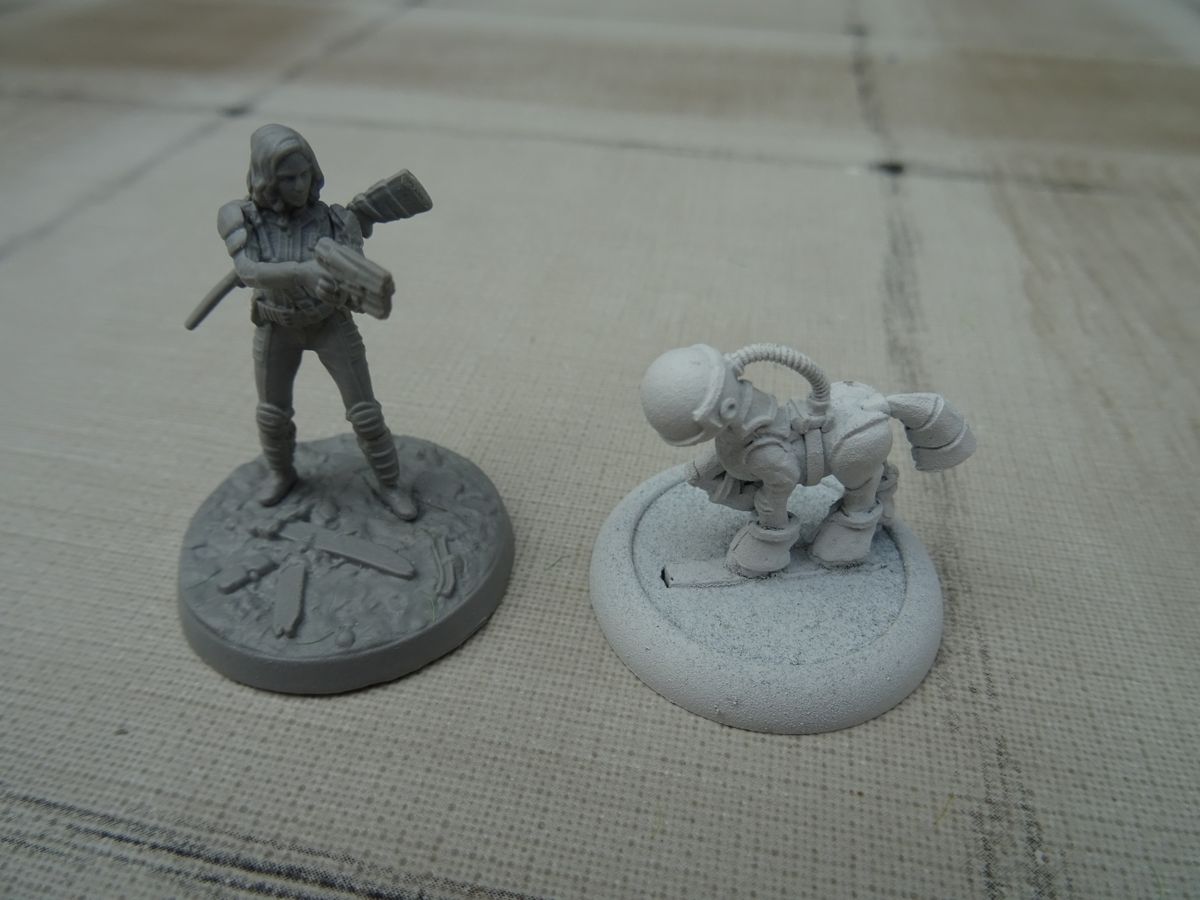 Ruleswise, Puppy would have Low scores in STR, PER, INT and AGI. Her CHA would be pretty high and her END and LUC would be through the roof.
Armor … probably 3 on physical and energy and immunity from radiation.
She sucks at shooting but is pretty good in close combat.
As for her special abilities … I’ll have to think about those.

This reminds me of someone who made a MLP Warhammer Fantasy 9th ed Bretonnia army; Adorable and great!

Okie nothing custom today but i did get some painting done while all shut in.

Vault project is coming along!

I like the terminal added at the side, it’s a nice touch