Demo of Roll20 setup for STA

Here’s a short demo of my Roll20 setup I use in my campaign. I know some folks were thinking about using virtual tabletops for their games. Not a tutorial and not an example of a Roll20 power user, but hopefully something of value here for you. Enjoy. 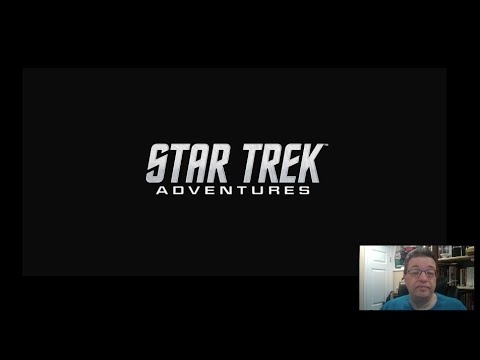 @Modiphius-Jim I’ve done a few things differently myself - any objection if I put them in here? Or would you prefer me to start a new thread? (I don’t want to steal your thunder!)

Whatever works! Won’t be stealing my thunder; I’m just here to help and offer ideas. No ego involved.

Ok, so here’s my take, although I’ve done a lot of very similar to @Modiphius-Jim .

First off, my main view has deckplans for a number of significant areas associated with the player’s characters: bridge, sickbay, main engineering and security. The characters’ tokens get moved around to indicate which part of the ship they’re in - this is mostly for visualisation, but I do have combat areas marked out in white if a fight breaks out. There’s a major conference going on in sickbay at the moment.

Note that I use card decks for plot currency (derived from the recommended Savage Worlds set-up). The advantage is that they can be dealt to individual players (determination - that’s the IDIC counters - which go into the players’ hands), me (threat - sitting in my hand just above my avatar), or the table (momentum - there are 2 next to the bridge map). I generally handle the dealing of the counters and adding threat, players can grab momentum or play determination as they need to. The decks themselves are to the right of the map.

This is our campaign map (loaded on a separate page).

The campaign revolves around exploring the mazelike interior of the Black Cluster, so I’m making heavy use of the Fog of War feature. The players get to choose which tunnel to follow, so we’ve got a dungeon-esque sandbox, with a pre-allocated scenario at each star. The Starfleet token indicates the ship’s current location.

A tactical map - from the scenario Darkness (although I wasn’t taking advantage of the Fog of War here):

The map itself is from the freebies included in Roll20, the buildings from the maps at Continuing Mission, and the shuttle is from a plan view I drew a while back. The combat zones were drawn with the Roll20 drawing tool - I wouldn’t try to do too much with that, it’s very fiddly!

Incidentally, my deckplans, shuttle views and some maps were all draw in in Campaign Cartographer. I am not a highly-accomplished photoshopper!

For space combat, I’ve uploaded one of the space grid maps from Continuing Missions. With basic ship tokens it serves quite well.

A word to the wise: make sure your art and handouts are well organised - it’s easy to get overwhelmed if you leave it too long to put things in folders, but they really help.

The Ship Talents and so forth towards the top of the image here are basically STCCG card blanks with custom image and the wording for the relevant ability. It saves having the book handy or copying loads of text to a character sheet if someone needs to reference what they can do. Each player has access to their own abilities in their journal.

We’ve found Discord seems to work better than Roll20 for audio chat and video, while using the latter as a game table. I have added a theme tune (!) to the jukebox, but will be adding sound effects per Jim’s suggestion.

One thing to bear in mind: all this has been done on the free tier of Roll20. There’s no “compendium” to share and I prune my graphics quite heavily, so I stay inside the 100 Mb limit. I keep rules references and background info in a shared folder in Google Drive. The players also maintain logs and the like there.

I think that about covers it - I hope someone finds it useful! Let me know if you have any questions - I’m happy to expand on any element.

All of this is fantastic! Modiphius-Jim, do you have a group in mind already for the “New Beginnings?” I just purchased the the corebook and all the STA pdfs. I am brand new to RPGs in general, and found STA after asking for recommendations at /r/rpg. I am extremely eager to find a group with a good GM (remotely during Covid).

I’m still noodling on what exactly I want to do with it. Feel free to email me with your interest and I’ll let you know once I figure something out. It’ll likely be a one-shot done several times so I can introduce new players to the game and maybe another series where I do some one-shots as a GM primer/intro. If either sounds interesting, email me at jim at modiphius.com and I’ll add you to a list and then figure something out.