I’ve been working on getting a vault layout set up using the Modiphius Vault stls, but I’ve run into an issue. The Utility doorway that comes with the kit is not the same size as any of the other walls or doors. The main Gear door comes together to be effectively 3 walls long, but the utility door is between 1 and 2 walls wide. For reference: 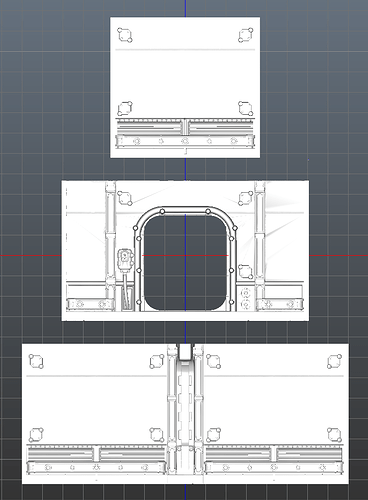 Let me look into this with the team.

Right, I’ve gone and had a chat with the designer and also jumped into FO4 and messed about with the Vault Creation Kit there.

The basic premise of the way the walls/tiles were designed was on the basis that truly printing a full vault would get prohibitively expensive, so rather than do everything, we envisioned folks would print bespoke room “modules” and then the negative space would be considered corridors once you placed all your rooms onto a mat.

As such the Utility Corridor is not two tiles wide, instead being 1 and a bit as you note above, so doesn’t mesh perfectly if you try to grid out and print everything. But if you make the utility corridor as a stand alone “room” using the negative space explanation above it can be used.

We have had a chat and if we find the time to add to the set, then a fuller version of the two wide utility corridor setup could be explored, with both central and offset doors to fully match the in game version and allow true modularity, but its not on the table right now.

If we do do more, we’ll let folks know for sure.

I will admit that this has been pretty expensive, at least in terms of print-hours! 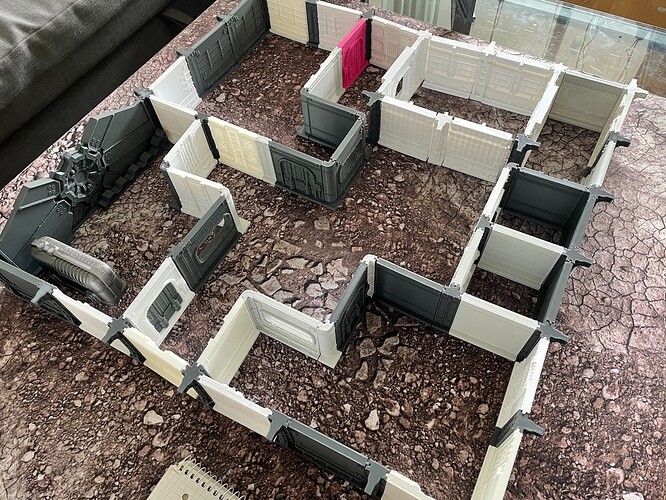 It’s only a 6x6 layout, but that fits nicely into a 2x2 board. Once I get this whole set painted up I may expand to support a 9x9 so that it can fit on a 3x3 board.

looks great! I had issue with the vault door not fitting very well…leaveing gaps? The door you have looks pretty tight? What did you use to print it?

These were all done on either an Ender 3 or Adventurer 4. The Vault door definitely has some tight tolerances, and it’s worth noting that the gear door only really fits well in one orientation.