ALL SALES FINAL! NO EXCEPTIONS!
(“Geez, this guy’s worse than a Ferengi…”)

Some of you may know about the Cory Belote-style starship PDFs I’ve presented as a resource on these forums. I hope you found (and continue to find) them useful. Now I want to present the Modiphius forums with another STA resource I’ve been creating and adjusting for the better part of a year: my fanmade write-ups for lesser known starship classes, especially the old FASA starships. After the publication of the Utopia Planitia sourcebook and Star Trek Minutiae recently updating their Starship Size Comparison images, I took it upon myself to make STA write-ups for a few starbase classes as well. I’m proud of these write-ups and wanted to share them, so here they are.

You can find my starship write-ups in PDF form here. There are 30 starship designs as of this writing, mostly FASA write-ups of my own design along with a few assorted others, like the Freedom-class and Leningrad-class that I designed as Earth-Romulan War era starships.

You can find my starbase write-ups in PDF form here. They include the Alexandria-class (a combination combat starbase and repair yard introduced just after the Dominion War), the Helios-class (the class of the Jupiter research station seen in VOY), the Lotus-class (fanmade TMP era large starbase), Watchtower-class (TOS era starbase), and the Sigma-class (the class of SB 375 seen in Season 6 of DS9, a pure combat defense/border post).

I’ll likely add more write-ups in the coming months (and years?) as I get more inspired to draw them up. For now, they’re yours to peruse as you see fit.

You missed a : in your ST Minutiae link: https://www.st-minutiae.com/resources/comparison/index.html

Ok, that was weird, the link for Star Trek Minutiae had an extra “https” thingie in it. Derp. Just fixed it.

…Odd that 5 people clicked on that nonfunctioning link and didn’t say anything. Welp, it’s fixed now.

After seeing the Expansive Department Talent in the Utopia Planitia book, I just got inspired to make write-ups for the California and Parliament classes. I should have them ready in a couple of days and I’ll add them to the starships folder for download.

I had to slightly adjust the California class’ overview text and its Department Points; I’ll be putting in the new PDF in my GoogleDocs later today.

The PDF write-ups of the California and Parliament classes are now ready for re-download and download, respectively, at the OP’s starship PDF download link. The Parliament write-up includes a supplement detailing the orbital platforms seen in “Cupid’s Errant Arrow” episode of Lower Decks. Their counterparts in my Cory Belote-style starship PDF folder have been updated as well. Enjoy!

I just started a Small Craft run of fan write-ups. I just finished designing the Aqua-shuttle from The Animated Series and added both the write-up and the starship PDF to my GoogleDocs. Enjoy!

I just finished the Osler class, the spooky medical ship from the Lower Decks Season 1 episode “Much Ado about Boimler.” Here’s the write-up and the starship PDF. Enjoy! (Kudos again to Chris Sham at FjordsofAfrica for inspiration.)

I’ve been on a bit of an Earth-Romulan War kick of late. I just finished reading the ENT relaunch Romulan War novels Beneath the Raptor’s Wings and To Brave the Storm and I’m waiting on baited breath for the guys at The Romulan War to finish Part 2. Both things inspired me to create some more Earth-Romulan War era Romulan starships based on both the 22nd cent bird-of-prey in the Beta Q book and the Utopia Planitia rules.

AtolmAzel was kind enough to grant me permission to use some of his art at DeviantArt for the Romulan starship images. Have a gander: 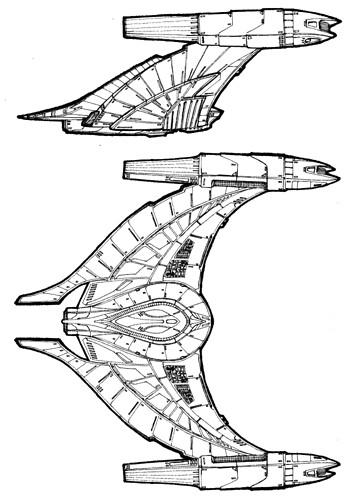 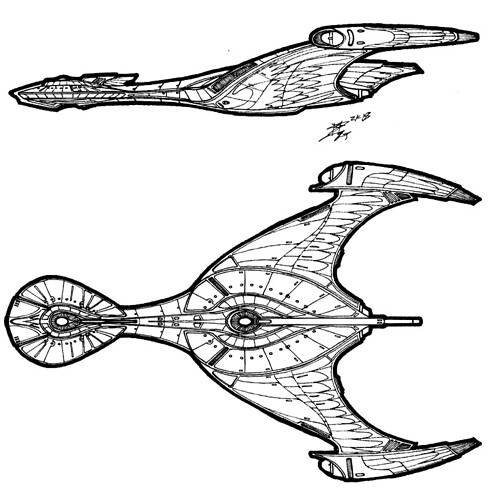 I should have all three write-ups ready for download in my Starship GoogleDocs folder in a few days. Stay tuned.

I do love a good Romulan ship.

Damn it, you are giving me inspiration!

I forgot to mention, I’m having Mr. Gone create Romulan starship sheets for these as well.

Ok, I updated the 22nd century Romulan bird-of-prey with Utopia Planitia stats and named it the V-1 T’Varo class. I just finished the write-ups for the other three Earth-Romulan War era Romulan ships: the V-2 Kroixus bird-of-prey, the V-3 Deldax bird-of-prey, and the V-4 D’deletham cruiser.

They’re in my regular Starships Creation GoogleDocs folder, but I made direct links to them in this post just in case. The Starship PDFs for them will be available soon in the Cory Belote thread; Mr. Gone is busy but he’ll get to them within a few days or so.

Ok, I just finished the write-up and the starship PDF for the Earth-Romulan War era Yorktown-class battleship.

I put all of my so-far-completed Earth-Romulan War era stuff in its own folder here. Feel free to check it out.

I just came here to say thanks for this great work! Nice to see love given to these designs!

Just to let you all know, I’m in the process of updating all my pre-Utopia Planitia starship write-ups with updated stats and fluff (including primary shipyards, mission profiles, and naming traditions). I’d provide a list of the ships I’ve finished now, but it would quickly become obsolete in a few hours anyway. Besides, you can tell straight off if one of my starship designs has been updated or not: just look underneath the dimensions stats and see if “Primary Shipyards” is listed or not. If not, it’s an old write-up that still needs to be updated.

With a bit of luck, I should finish all the updates in a week or two.

Oh, something else: Michael Dismuke happened to see my starbase GoogleDocs and he said he’s going to publish a series of articles on them at Continuing Mission in the coming weeks. I also informed him of my other fanmade STA stuff including my write-ups, starship sheet PDFs and Earth-Romulan War stuff. We’ll see what happens.

I finally got it done! Ladies and gentlemen, I give you at long last the most beloved of the old FASA spaceframes: the Chandley-class frigate! Starship PDF and write-up.

P.S. As always, if either link goes dead because I update the files on my GoogleDocs and forget to update the links here, just go to the OP and follow the links to either the Cory Belote starship PDFs or the starship write-ups depending on what you need.

IT HAS BEGUN: Michael Dismuke just published the first of his articles on my starships and starbases, the Akyazi class perimeter action starship, at Continuing Mission. One down, 48 (and counting) to go!

In other news, I just got the TOS Federation-class battleship write-up done. I’m making progress on the Federation-class refit write-up. Once both are done, I’ll post them both to my GoogleDocs.

As always, if any of these links in this post go dead because I forgot to update the links after edits, just go to the OP of either thread and follow the links to what you need.

EDIT 2: So much for the nap. Inspiration struck and now I’m designing the FASA space stations, specifically the Federation Alamo-class defense outpost, the Romulan X-3 Aviary-class defense outpost, and the Klingon Z-4 Deathgame-class defense outpost. As they were originally designed for the FASA board game, they’re not much more than weak TOS era Sigma defense posts, but what can I say? Inspiration struck and maybe someone might find them useful. The Deathgame is done and in my starbase folder (link in the OP), but the Aviary and the Alamo are going to need another day or so to finish. Stay tuned.