A question for the Star Trek fans with better memories than mine.

The Starfleet Museum. One of the scripts said it was located at Memory Alpha. Even though it was never in dialog, it seems a good place for it to me.

You could be thinking of Qualor II, the shipyard they visited on Unification. It included decommissioned Starfleet ships and at least some Vulcan, given the reason for Enterprise’s visit. 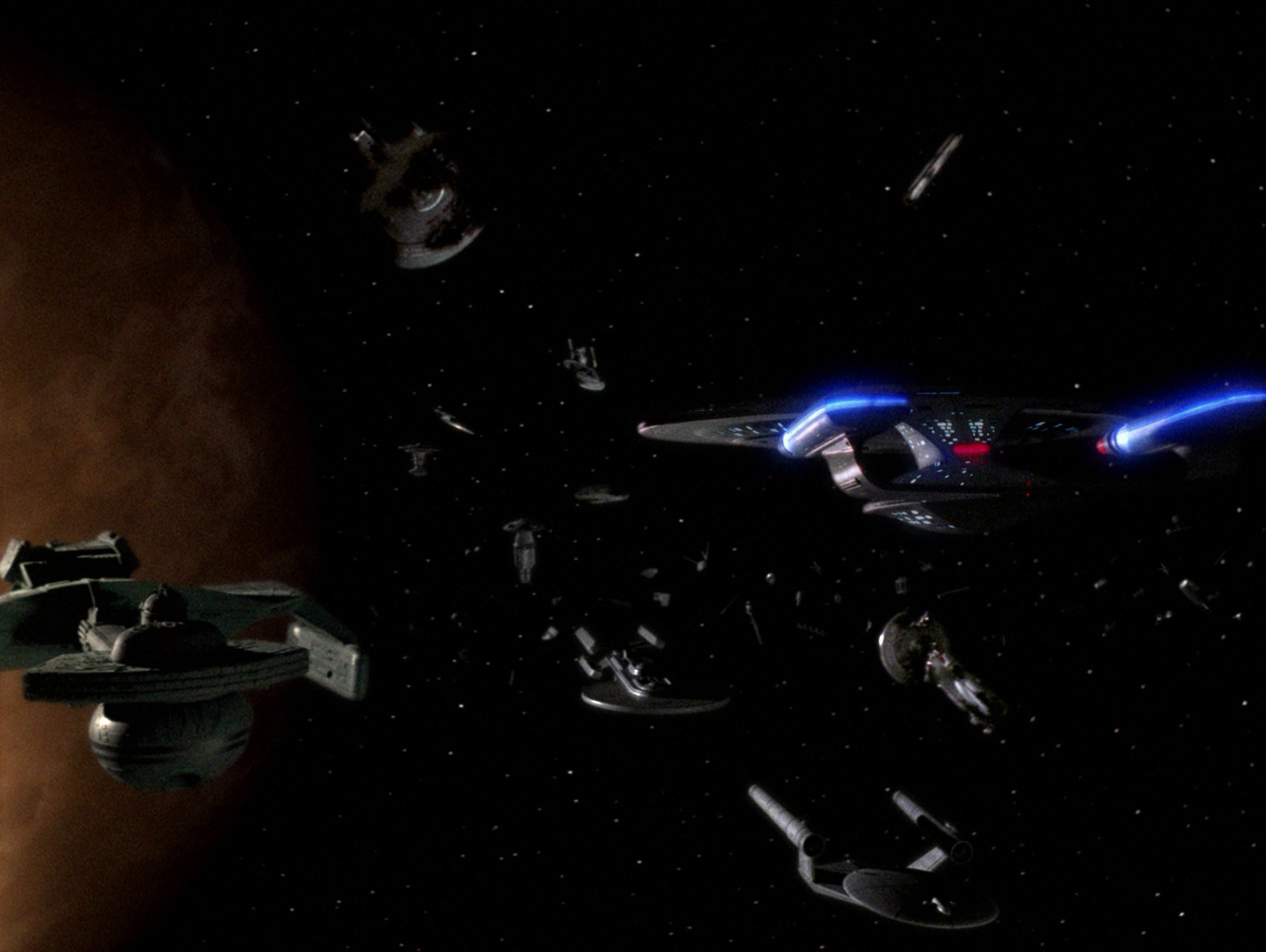 Surplus Depot Z15 was a Federation surplus depot operated by the Zakdorn, located on and in orbit of Qualor II in Sector 213. The facility was responsible for salvaging useful components from decommissioned vessels before storing them in the depot....

Thanks all.
Qualor II is what I had dimly remembered,
So I’ll be using Surplus Depot Z15.

I always liked the idea of Starfleet having vast fleets of ships just sitting there, waiting to be hauled out and updated for the next Dominion War or Borg incursion.

After WW2 the US Navy retained a large number of ships, no longer needed in peacetime, but new enough not to be wasted by “mothballing”. It was a process by which ships were preserved as a floating reserve, in case they were needed. Indeed, before the US became directly in the war, 50 “four piper” type destroyers were lend leased to the British to give them more escort platforms for the Battle of the Atlantic. My point is that after the Dominion War, I assume Starfleet would not need all the extra ships they had built, and would retire some of them. Some could easily be the newest types of “warships” removed from service in favor of exploratory types. Since there is no canon on it, a GM is pretty open, I should think.

The Military also sold off a lot number of their Duckboats to civilians. I could see some of the oldest Mirandas, Constellations, Sydey, Oberth and maybe a few Excelsiors get stripped of their armaments and become civilian transport ships, like the Jenolan.

Especially with the waves of Steamrunner, Akiras and other new ships that can take their places.

That’s the premise in my STA game. The Steamrunner is kinda replacing the Miranda as an all around work boat when it isnt needed as a torpedo/fighter transport.

My PCs ship, the Arcadia, is exploring and helping in expansion into the Alpha Quadrant near the Tzenkethi and Ferengi area. The Federation has assigned our ship, a Nova, an Akira, and a Nebula to dedicated taskes in that area. They have also given a handful of TOS Movie Era ships they had mothballed to transporting civilians and mining operations

I could see some of the oldest Mirandas, Constellations, Sydey, Oberth and maybe a few Excelsiors get stripped of their armaments and become civilian transport ships, like the Jenolan.

Technically speaking, the Sydney class did not have any armaments to begin with, aside from a tractor beam. Also, I don’t see them doing that with Excelsiors, simply because of how useful those ships still are. Constellations, Mirandas, and Oberths? Sure. Excelsiors? That’s a stretch to me, partly due to the scale of the ship, and it’s value not only as a possible training ship, but continued use in various operations, and the ‘iconic’ look. At one point one of the flagships of the Federation was an Excelsior, and they wouldn’t want to hand over that iconic image to civilians, who could potentially (depending on the civilians) use it in Piracy operations.

The Steamrunner is kinda replacing the Miranda as an all around work boat when it isnt needed as a torpedo/fighter transport.

The New Orleans class is meant to replace the Miranda, and has already started on replacing the older Mirandas. (At least according to the core rulebook entry on the New Orleans.) Considering it’s engines score, I would label the Steamrunner as replacing the Constellations and other fast-response vessels.

Ah, I missed that. Good thing I have my PCs working as a fast response ship then!

I also wonder, given replicator technology and ways to recycle materials, if old Starfleet ships are stripped of useful material and then the rest of it recycled.

This is an interesting question. Given the sheer number of mothballed ships that SF reactivated for the Dominion War, they may be wary of that. I don’t expect many of them survived the war. But we don’t really know. The movies really never deal with the contextual universe, just as TNG stayed away from metaplots generally. We haven’t really seen a post Dominion War setting. Hopefully Picard will.

This is partially addressed in a few episodes, I believe (although can’t recall the exact ones off the top of my head aside from the TNG episode dealing with the ship ‘graveyard’).

Weapons technology, transporters, replicators, and any Starfleet-specific technologies are generally stripped from the ship along with the warp cores. Basic engines, deflectors, shields, and outdated sensor technology is generally left with the bulk of the ship.

At least, that is how I would handle mothballed ships in my ‘game world’. Mothballed ships would have their main deflector or secondary deflector and basic shield emitters left while getting the weapons, warp core, and anything still usable stripped off them on the way to being mothballed. The items removed would be shipped, stored, or upgraded as needed to be ready for the next ship in need of a refit that would be able to use the materials.

I might have some Non-Refit Oberths and Mirandas in my game. I am using the Lukari from Star Trek Online and just having it happen in 2376 instead of 2410. I figured Starfleet might trade out a few old ships as a sign of good faith to learn some Protomatter Terraforming techniques to help them get on their feet back into the Warp Community.