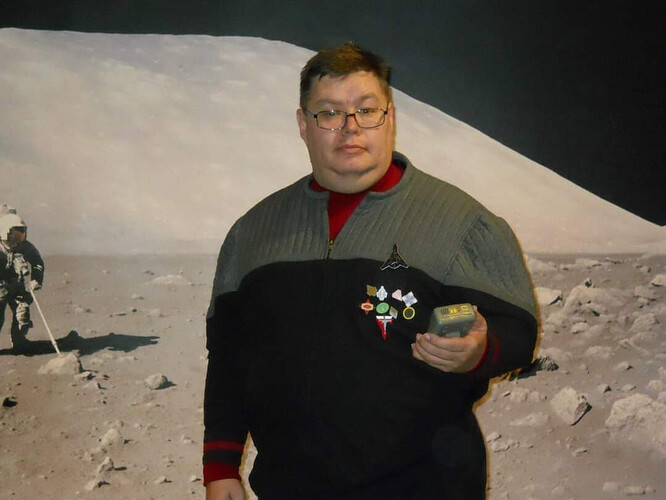 “Death is that state in which one exists only in the memory of others which is why it is not an end.” Yar- Skin of Evil, Stardate: 41601.3

On December 20, 2022, Captain Roger Taylor, Commanding Officer of the USS Essex, passed away in his Ogden, Utah apartment. After he had not responded to communications, a family member went to check on him only to discover his body. He had recently been experiencing heart issues which contributed to his passing.

Roger served in the US Navy. After retiring from the military, he served as a security guard at a Salt Lake area IT company. This is where he met several Seventh Fleet members who encouraged him to become a member. Besides Star Trek and gaming, he loved raising a bird named Charley, writing, playing video games, building military models and baking.

Roger joined the Seventh Fleet in 2008. With his Star Trek knowledge, his love of Star Trek role-playing games and writing, he quickly rose through the ranks. Eventually becoming the Executive Officer of the USS Retributor before moving onto command of the Essex.

When the Seventh Fleet was using the Decipher entry into the Star Trek Roleplaying Game, Captain Taylor wrote and co-wrote several guidebooks for member use. He also filled the Gamemaster duties for several chapters that wanted to hold RPG sessions. With the release of the Star Trek Adventures roleplaying game by Modiphius, Captain Taylor wrote several articles that were published on the Seventh Fleet blog and at the STA fan website, Continuing Mission. We have several more articles that have not been posted, but will be scheduled soon. Captain Taylor also ran and homebrewed for the Serenity roleplaying game as well.

Roger’s family have set up a GoFundMe page to help with funeral expenses. If you can, please donate. Remember: “We Do Not Stand Alone.” We would like to extend our deepest condolences to Roger’s family at this time.