Painting the Starter Kit (and a bit extra)

I have the Starter Kit and a Super Mutant resin set, plus I’ve been painting up a resin Starter Kit upgrade, scatter terrain, and Brotherhood of Steel Knights for a friend. It took me a while before I could actually get my hands on my own Starter Kit for some official Fallout miniatures, so for a while I was painting up other figures as proxies.

For what it’s worth, the PVC minis actually look pretty nice even right next to the resins. I can tell that there are sharper details in the resin, but I don’t have contest-quality painting skills, so a lot of that sharper detail is probably wasted on me anyway. All things considered, I think I actually prefer the PVC for its durability. (A nice extra is that the PVC minis in the Starter Kit are already assembled, of course.)

I’m glad to say that the PVC and resin minis take spray-on primer just fine in either case. (I’ve had bad experiences with some softer plastic minis from certain companies where the figure develops a perpetually tacky/sticky feel after being spray-coated, even after I’ve painted it up in acrylics. For this reason, I’ve learned that it’s best to do a test with a sample of the plastic – maybe just spray the bottom of the base, for instance – before I go overboard and spray the whole lot of them.)

However, one thing I learned when spray-coating the resin is that the standard tip I keep hearing about “wash your resin models in soap and water before painting” is really true for the resins. I had problems with several of the resin models with the spray-primer flaking off of recessed areas where I suppose there was a bit of release still hiding. After cleaning off the figure and re-priming, I had no further issues.

The biggest challenge I’ve had so far with the resins has been with the Super Mutants. Although they assemble fairly well enough (I did some pinning and putty work even though they COULD be assembled with just glue), the sledgehammers and nail boards are particularly prone to warping and breakage. I’ve tried the “dunk in hot water” method to straighten things out, but to modest effect. Although I use pluck foam for storage and try to very carefully allocate space for the figures so any extremities won’t be under pressure when I close the box lid, I’ve still had problems with sledgehammer heads falling off when I get them back out of the box.

The nail boards aren’t quite as easily fixed with wire. It’s probably not the best solution, but when necessary, I’ve been replacing them with “junk weapons” made from bits in my “bitz box,” with a bit of putty to give them an extra scrappy look. (The picture above was taken right after I’d first painted a bunch of the super mutants, so the boards are still intact.)

Nuka Girl was a fun mini to paint up. The STOP sign on the base makes for a detail that isn’t hard to make look nice with a little bit of basic painting. The face is wonderfully sculpted, such that I had to get out the jeweler’s scope to take the extra time to give it the care it needed to actually paint Nuka Girl up with something resembling an actual expression, rather than just obliterating it in “flesh tone dip.”

One thing sadly missing from this model is, of course, the iconic bubble helmet. I didn’t quite nail it, but I managed to score a few retro bubble helmets from HeroClix – specifically, the “SHIELD Agent” (#11 from Marvel HeroClix: Avengers Infinity) or “Nick Fury” (#17 from the same set – the same figure, but with a head swap). The clear bubble helmets can be popped off with varying degrees of effort – depending, I suppose, on how much glue was used in the assembly. I bought several, and some would just pop off with minimal effort, while some required more coercion from a hobby knife. Note that as a cheap plastic helmet, it DOES have a mold seam, so when putting it on Nuka Girl, you’ll probably want to rotate it so that the seam isn’t in front of her face.

I LOVE the Brotherhood of Steel figures! There’s so much intricate detail going on in all of these figures. I can’t manage to paint a passable Brotherhood symbol on the power armor chest (even with the embossing) to save my life, but at least there’s a hint that it’s there.

I’m also partial to the scatter terrain. As much as I love miniatures, I feel like it’s not “really Fallout” until they have a suitably retro-futuristic post-apocalyptic environment to explore and fight in. Toward this end, I adore the Robco terminals and the desk. (I just wish it was cost-effective to have a LOT MORE of them.) The consoles are detailed right down to a full keyboard layout, and there’s enough space to doodle a bit on the screen to suggest some sort of display.

The desk has a lot more in the way of smooth surfaces, and could therefore be rather boring, but I took care to try to give it that weathered, beat-up look that pervades desks throughout the Fallout universe, even if they’ve been lying undisturbed for 200 years underground, with a skeleton still at the keyboard (and somehow the skeleton’s clothes have completely decayed, yet the papers on the desk right in front of it are just fine – go figure).

I did this by base-coating the whole thing grey, then spackling with a “Parchment” acrylic paint (a yellow-ish off-white color), tending more toward the middle of any given surface area, and leaving the corners and edges relatively exposed. Once that dried, I lightly painted the whole thing with beige, and then finger-wiped the surface, smearing the paint and removing most of it so it acted more as a stain rather than covering up everything underneath. Once THAT dried, I spattered the desk with some heavily-watered down “Graphite Gray” and with a bit of the gunk at the bottom of the paintbrush water bowl, and let that dry to get a water-damage look.

Lastly, I scoured Google Images for various images of magazines, books, clipboards, packaging, and other paper elements from the Fallout universe. (The Fallout wiki is a great starting place.) I cobbled a bunch of these together in Photoshop onto a single page, then printed that out on paper. Thus, I could cut out a few “magazines” and “books” and glue it down, creating some desktop clutter. (I’ve sometimes added these elements to bases as well – or put posters and signs on walls – to give everything more of that “Fallout brand” look.)

You can also find posters, Bill boards and a DIY Mr Handy box on the fallout wasteland warfare facebook page

Didn’t find anything good on google but I am looking for a guide on how to paint these minis from the Core Set.

I’ve already primed them and I’ve painted minis before, but was hoping for a follow along guide if anyone could help. 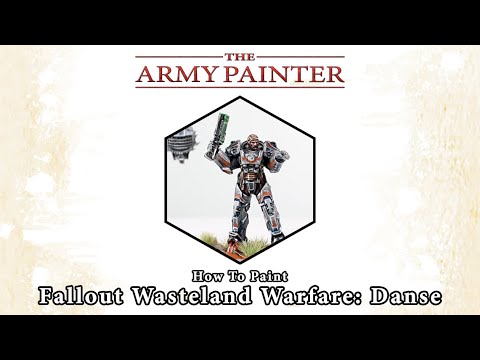 on how to paint individual minis that are useful. The techniques on Dante are more or less the same for Goddard for instance.
Never came across anything detailing the entire set though.

There are some more complete painting guides in the Commonwealth expansion coming next year, covering the three launch factions of Survivors, Brotherhood of Steel and Super Mutants.

This includes step by step guides and paint swatch guides.

I’d suggest looking at the linked Army Painter guide as well as Duncan Rhodes Paint Academy if you need some ideas for how to use paint/wash techniques to get great results, then its a case of finding the paint/colours you want to work with and applying the techniques you have learned and away you go.