Today I finally got my set of NCR Core box, all prepared with cleaning the resin miniatures and glueing all the parts. 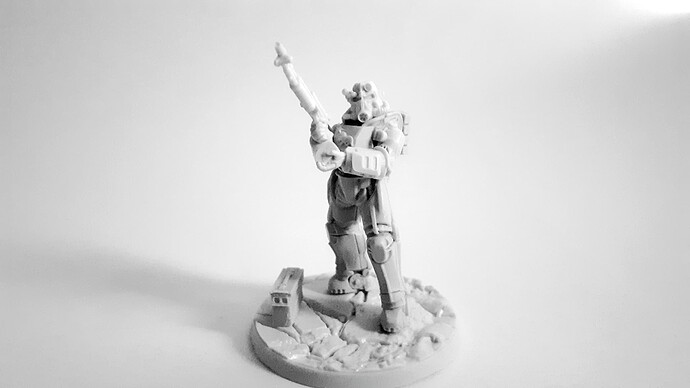 However, I had one major issue where the paint on the Heavy Trooper started to come off after drybrushing, despite cleaning the model twice in warmish soapy water and later two thin undercoats of matt black paint. This was the first time I’ve experienced a set back like this, even tbough I’ve been cleaning and painting Modipius resin miniatures for over a year now.

I’m hoping it may just be a minor issue, but more than likely I’ll have to clean the affected area and possibly ruin my undercoating.

Thankfully, I’ve not undercoated the rest of the set yet so I might just clean them again just in case. I suppose it’s a downside to resin miniatures where if your not careful, it could turn out pretty bad.

What primer did you use for this? Airbrush, rattle can or paint on?

Its a noted issue that sometimes our resin has an unusual hydrophobic property, I’ve been trying lots of different products to try to offer the best possible solution and so far I’d say rattle can priming is giving the best possible results.

You shouldn’t need to wash the resin we make as we don’t use mould release in house, but of course there may be the odd bit of dirt or finger grease so its not totally pointless to do it.

Let me know what you are using and I will try to advise.

I have had the problem of paint not adhering to resin minis before although not with Modiphius. I had only washed it once and assumed I had done a bad job. A second wash and a reprime fixed it. Don’t know what else to suggest…

Additional data - I put a thin coat of Halfords grey primer over the mini before I do anything else and haven’t had any issues. I do always wash resin minis, but that’s just force of habit.

Halfords primer is in my tool box for sure!

The grey primer puts a really nice tooth on the model with a light pass, so I second this notion.

A long over due update on the situation, as well as replying to comments by @Modiphius-Jon and @Info_Overload into this comment.

So I tend to clean resin miniatures just in case there’s still bits of release agent on the miniature, which I do for FW resin miniatures or other resin miniature products. I’ve done this with evey Modiphius F:WW miniature and it’s gone well (a few very small pockets of recess patches tend to open up after the first undercoat, but its nothing major as a second or third coat patches these small areas well.

I use Model Colour range of acrylic paints using a paintbrush (Matt Black as undercoat), I used to spray paint using acrylic cans, but it’s the cost nowadays that I’d rather get some for larger miniatures.

What did surprise me was how for the Salvaged Power Armour miniature, as I drybrushed it in Model Colour silver acrylic paint, the two thin coats that were dryed, just came off as I used my brush.

Pic below was my attempt to patch up this area in another layer of Model Colour Matt Black. 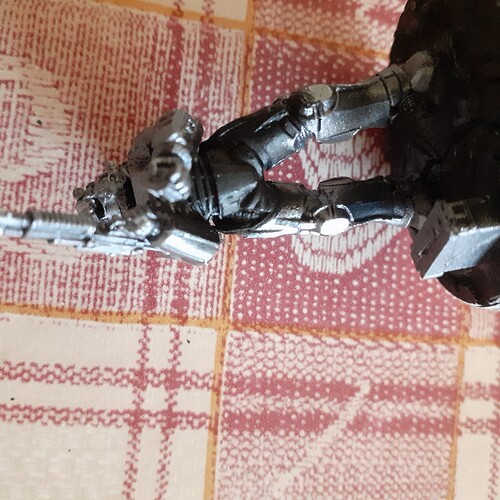 Thankfully the additional (if hasty) layer of Matt Black did hold up this time. Onwards the entire model was hassle free to paint with no other issues.

However, I’ve observed that this issue did occur when I attempted to do two thin coats of Matt Black on the bases rim of my other NCR miniatures. The dryed up first coating would tear off whilst applying the second coat.

It could be my paint brush was rough enough to drag layers off, though it was fine when used to drybrush the rest of the miniatures.

I’m somehat unsure as to the fault, it could be flat areas tend to need more layers possibly?

Below is the completed miniature of the Heavy Trooper. 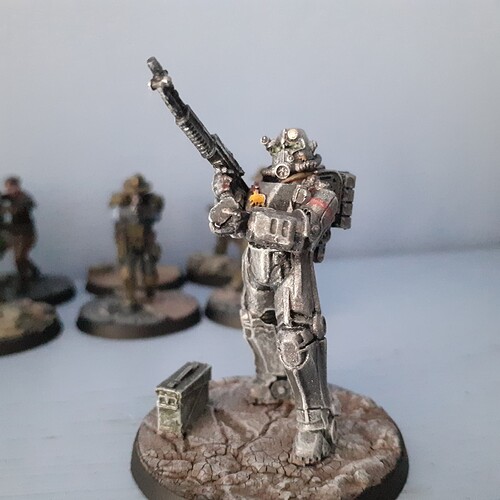 In future I might consider getting some spray cans as an essential again, though I’d like to reiterate that I’ve never had any issues with Modiphius minatures before. I’d consider this an isolated issue either to do with me cleaning the miniatures or possibly a batch issue, though the rest of the miniatutes were top quality to paint.

Thinned paint can sometimes hit issues with surface tension and bead up/repel/tear so perhaps the sacred two thin coats might be causing a mild issue here.

End result looks grand though, glad you were able to over come the issues and sorry for the extra hassle.