Infinity Yu Jing reveals the secrets of the StateEmpire!

Infinity: Yu Jing is available in print and PDF on Modiphius.net as part of the Infinity Collection and on DriveThruRPG as a PDF only. If you already own the Infinity PDF Collection or the Infinity Bundle on DTRPG.com these have also been updated.

Here are the details on this intriguing new faction source book which explores the foundations and culture of the StateEmpire. 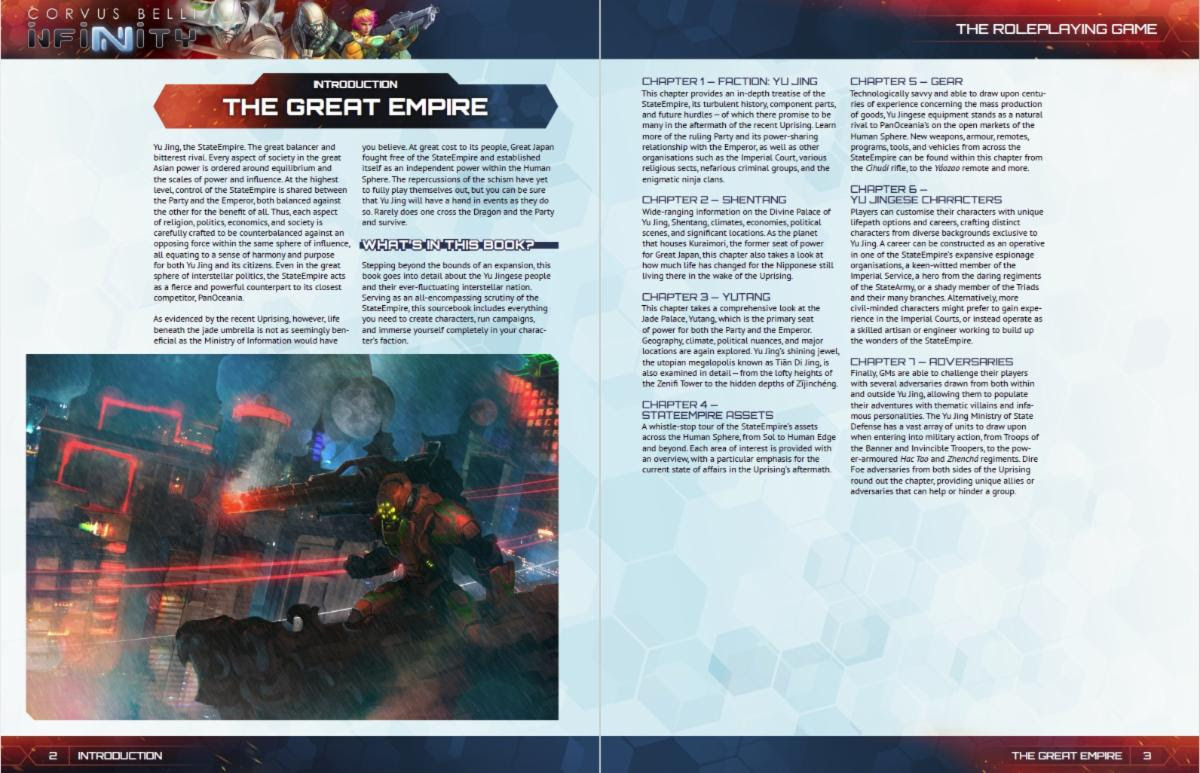 Yu Jing. The StateEmpire. Governed by the Party and policed by the Emperor, the balance of the two makes this powerful G5 nation greater than the sum of its parts. Late as they were to the great space race that led to humanity proliferating amongst the stars, the people of Yu Jing have worked doubly hard to ensure they step beyond the long shadow of their nearest rival and rise to eclipse it.

Viewed all too often with misunderstanding and mistrust from without, the Yu Jingese view themselves as a powerhouse nation that has the best interests of its citizens at heart. Wholly committed to spiritual and economic betterment so that they might serve as a beacon for the entire Human Sphere, the StateEmpire strives hard to be at the forefront of every arena it enters into. On the battllef eld, innovative servopowered armour designs are providing the StateEmpire Army with a superior advantage, while cutting-edge technology such as the Sù-Jiàn Immediate Action Unit is changing the face of Remote-led warfare. 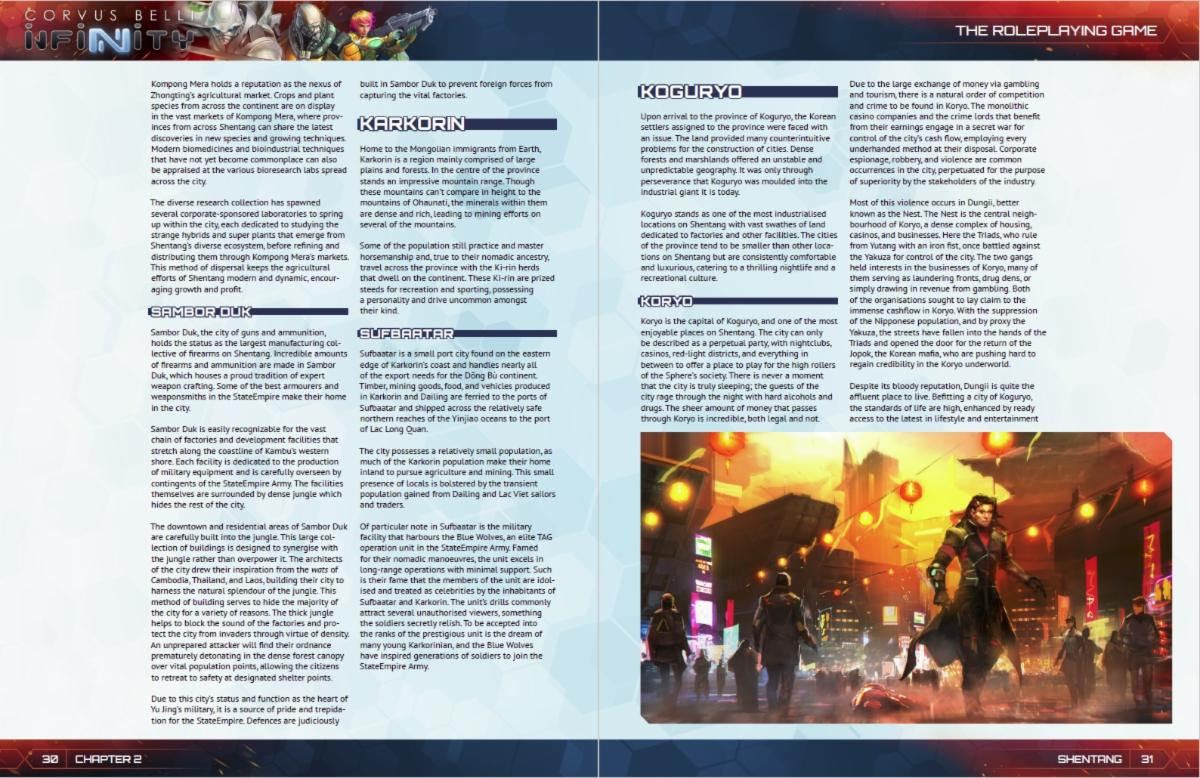 Not all is as harmonious as the Party’s propaganda would lead you to believe, however. Citizens slip through the cracks of society, instead turning to crime to boost their status. The fractured ninja clans, who of course do not exist, now fight a shadowy war for dominance in the wake of the Uprising. And the Emperor of Great Japan has torn his citizens free of an oppressive regime that treated his people as second-rate at best. Offering never-before-seen insights on the Jade Empire, this sourcebook will take you far beyond the Yu Jing’s veil of mystery. 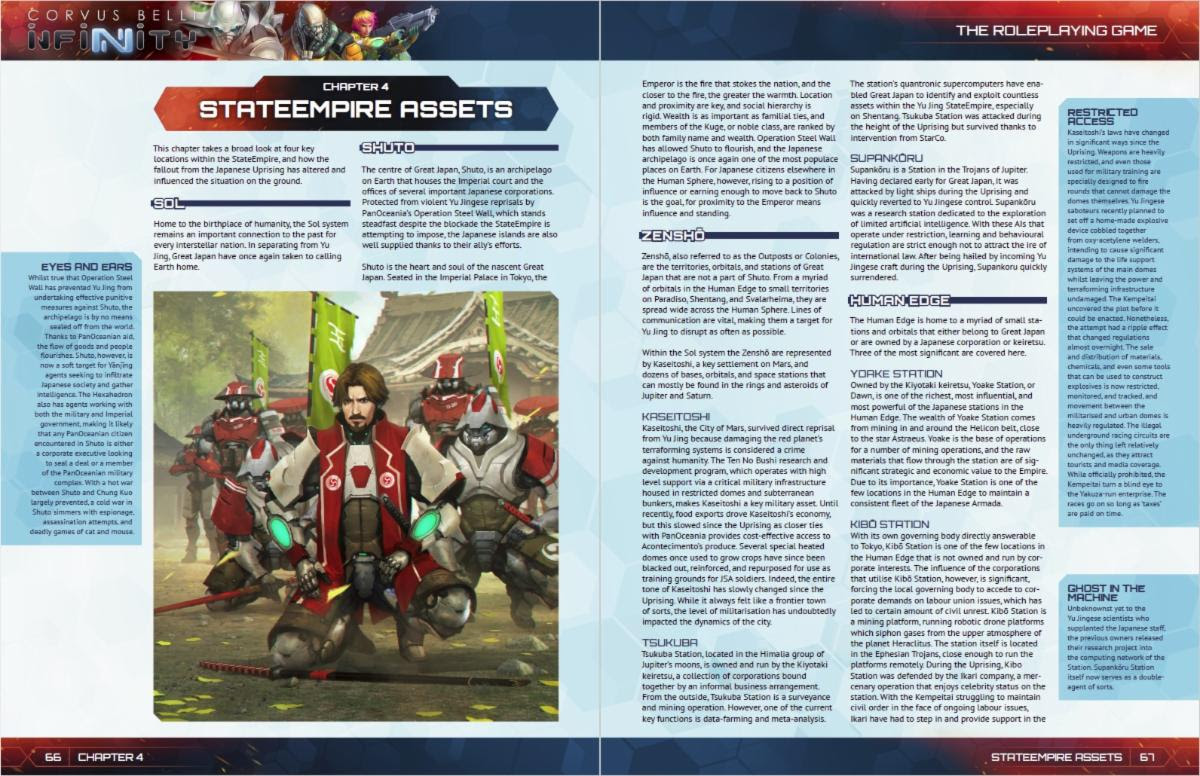 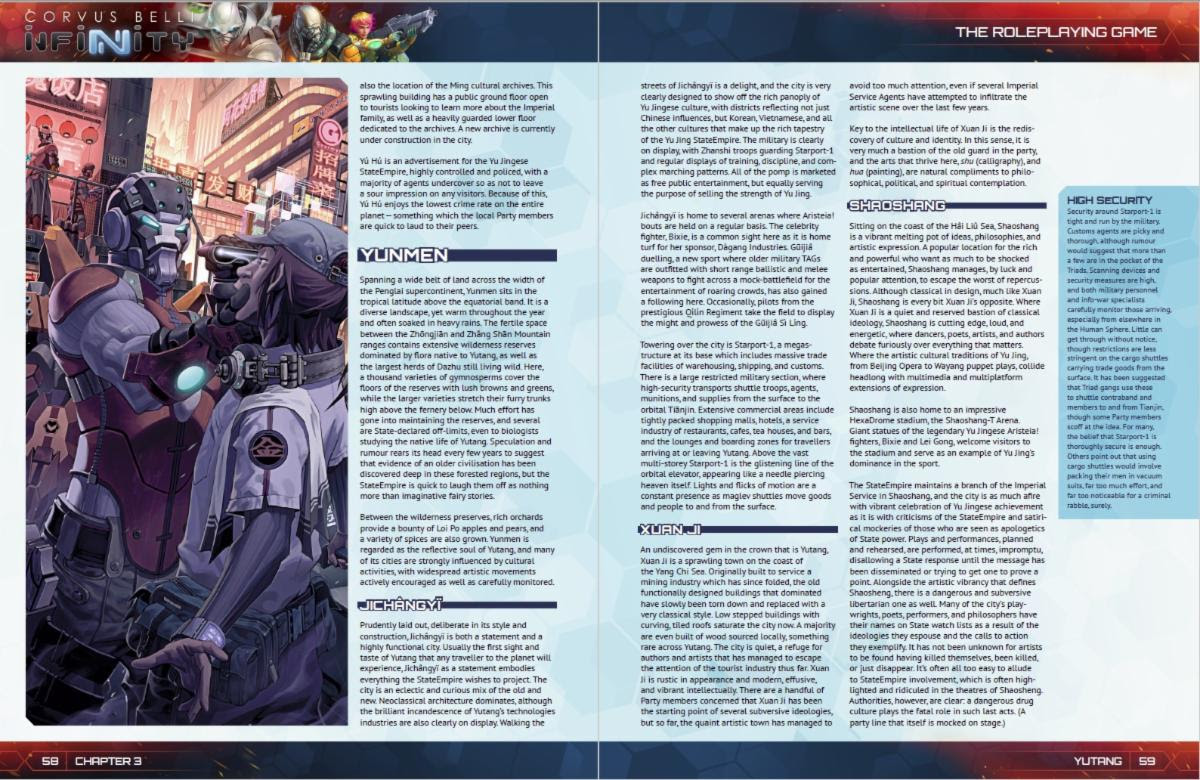 Wow… I thought for sure someone would have updated this document by now. v7 has so many errors. I mean, at least the gear table on page 81 called “S (Trait: Dragon-Blooded 1)” should have been fixed…

Are you sure you uploaded the proof-read version?

The DTRPG version Yu Jing v7 is an OLD PREVIEW version from the 21. July 2019.
That this old preview version was uploaded as the “final” version is an embarrassing problem that, hopefully, will be fixed soon.

I’ve alerted the powers that be.

Thanks @Modiphius-SteveH! The v7 copy has now been replaced by the August iteration.

Looks like at least one of the errors is still in place, though (p81, the Gear table that should probably be headed ‘Augmentations’ rather than ‘5 (Trait: Dragon-Blooded 1)’), so not sure how many fixes went in between July and August.

Well, that’s irking - while most of the proofing notes in Ch1 that I flagged up in June were resolved, looks like one on p18 got through.

I wonder if Modiphius have any vacancies for paid proof-readers?
Turns out they do. Thanks @Modiphius-SteveH!

Simon, our listing of job openings is at;

We are seeking a motivated hard-working individual to join our growing team of resin figure manufacturers. We work in a quality driven environment and require someone with a high attention to detail...

Is there a newer version of the PDF than this one available: Yu_Jing_Faction_Book_10082019.pdf?

In the Backerkit downloads and in the Infinity bundle on DTRPG I couldn’t find any newer (and possibly corrected) version of the Yu Jing source book PDF.

Can anyone help me with that?

I don’t know if Modiphius revisit editions once they’ve been ‘proofed’ and released. I know that there were errata compiled for some of the Mutant Chronicles 3 line, which were worked back into a couple of the sourcebooks, but I don’t know whether that’s likely to happen for any of the other lines. Especially as Modiphius don’t seem to have a central repository of errata for the INFINITY line to which to refer.

As you proof read the Yu Jing book, did you notice the missing costs for the Yao Zao Remote?
It was left out completely in the table section.
But as it is such a useful remote, I’d like to know how expensive that might be.
The other two remotes are listed, just this one is missing.

(And there are other inconsistencies as well in the tables like qualities as “Vicious 11” or “Armoured 21”. Obvious mistakes that should have been easy to spot and to correct.)

To be clear, I only ‘proof read’ in the sense of being one of the backers looking at the pre-release version and providing a list of things. Although I do wonder how many of us provided feedback … and how many are still doing so on more recent sourcebooks - I know that I, for one, got somewhat disheartened at having spotted things during my pass that didn’t get addressed before release. Why spend time doing something (for free) if it’s not going to be appreciated or applied? [shrugs]

(Most of my spots were spelling, and some formatting - and I didn’t have time to go through every chapter, so looking at my notes, I don’t think the missing Yao Zao costs were on my list - but I can’t imagine that I was the only backer giving it a proofing squint!)

As for issues like ‘Vicious 11’, I noticed last week that the Piranha handgun in the weapons table at the back of the MC3 Players Guide suffered a similar issue, gaining a ‘Restriction 11’!

I usually only have the time to skim through a backers copy of a PDF.
Only when things get relevant for my current campaign I do a careful read of a book. So that might take quite some time, much later than the publishing date.

But I know from other publishers that update their PDF versions quite often after some (mostly fan/customer originated) feedback came in. I don’t see that for Modiphius’ PDFs, though.

Exactly - there does sometimes seem to be an “it’s out of the door, no need to touch it again, what’s next?” approach with the IPs Modiphius handles.

(The lack of a central errata repository … or even records of them … is a major indicator of this.)