I didn’t even realize there wasn’t a ‘Ginaz Faction’ in the book until my older daughter wanted to play one … I read the book and just assumed there was one in it.

From the forum here, it looks like one will be coming, but until then, I put one together for her off the cuff.

First I mandated she had to take Performer

But for the rest of the talents, are these right for the ‘must chose at least one’?
Binding Promise, Bold, Cautious, Continually Watching, Decisive Action, Master at Arms, Rigorous Control, Reason I Fight, & Slow Blade

Yes, Ginaz are coming in Imperial Court, due mid 2023.
All we know at the moment is that they will be advanced characters, so presumably more powerful than the ones in the core book.

As for your choices I think you have a good handle on them.
Performer is an inspired choice if you have read Duncans training in the House books, as they mandate that a Swordmaster must be a person of my talents including the arts.

The only thing I would say is thst it is a long list.
I would be tempted to drop Bold, Cautious & Constantly Watching just to shorten it a bit.

Yup, you can’t play a full Ginaz yet (they can throw a Fremen across a room so somewhat potent) but you can play a swordmaster as the term applies to any blade master.

Even without some special talents (and you will see later they are very dangerous) you can use the Swordmaster trait do grant useful bonuses in the way traits do.

As something of a spoiler, in the Ginaz section in Emperor’s Court we do address how to join their training regime and gain their skills and abilities. So, your daughter can play a swordmaster character hoping to prove worthy of being sent by her House for training on Ginaz, which you can add in once Emperor’s Court is out.

Thanks for the replies

CountT Rgr on shortening the list. Wanted to emphasize that the Ginaz were not ‘only’ experts at swinging the sword, but were well rounded. I do think something like Performer or Stirring Rhetoric is critical to filling the feal of the spends time studying poetry etc as part of the training.

Andy-M look forward to it ! Putting it on my wish list right now

Has there already been a kick starter for it that I missed ?

Next pre-order is for Houses of the Landsraad, witch should be later this month. (Physical copies will be a few months later)

Emperor’s Court doesn’t have an ETA yet, but I am expecting an announcement around UKGamesExpo so expect June time for the pre-order on that one I think.

A bit off topic, but its regarding Houses of the Landsraad you mentioned. What do you know/think will be in this book?

Let me check my book of Dune Secrets…

Writeups of 18 Major Houses in the Landsraad*. - Roughly 2 pages per House covering:

Excerpt for House Harkonnen is Here

There will be expanded House Creation rules. Exactly what these cover hasn’t been detailed but there will be more options for building your House and its members.
For running the House there is a teased Reputation mechanic and ‘More than just Houses’. Possibly an expansion on the Seitch rules from Sand & Dust.

There will be a chapter on the Guild. Both for how it works and also more options for player characters. Talents, traits, etc…

*For the Pedants Richese is technically a House Minor Status at this point. 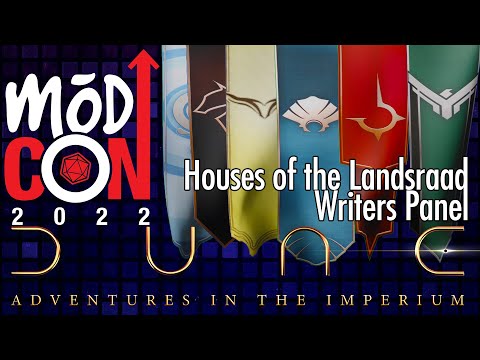 Thalim’s spymaster is correct there

I should add that while Modiphius does use Kickstarter we don’t for Dune products. We’ll be offering a preorder and shouting loudly about it for all the books so keep an eye on our website and socials.

Interestingly, a number of people at conventions tell me they backed the original kickstarter for the Corebook, even though we didn’t do one