Has anyone used contrast paints for painting fall out models?

Cool…they look good so far. I’d like to see them finished.

I do like the vibrant look of contrast paints. I think they especially fit well with the raiders, but not sure about the other factions

I’ve used aggaros dunes to "brown out " areas on some of mine. I find it works best in small areas but makes painting a lot faster.

I’ve picked up a few (5-6) of the colors here and there, and done some experimenting with them.

I have found that they have used for both the new painter, and the vet. And that those uses are not always what they are advertised to be.

Couple things to remember:
There is no color chart on the bottle, not most websites. So do some research or visit a physical store to get an idea of the colors.

Even the darkest color is at least a bit translucent. Important to note for when painting over other colors. And has been a great thing for some cool effects, such as colored metallics.

I’m away on vacation at the moment, but once I have returned from paying homage to The Mouse, I can share some photos, if you’d like.

@AlxRaven yes that would be great, thanks

I’ve used a combination of drybrushed metallics over black (for BoS / Robots) and contrast paints (for pretty much everything else) to put down the base coat / wash steps of all my models so far.
I have to say I’m impressed with the results. Almost good enough that I don’t feel I need a highlighting step, and the models are good for tabletop level as is.

I’ve just invested in a load and think they are great especially for painting large collections quickly. I find browns and flesh colours are the stand outs of the range with vibrant colours have varying degrees of success. I mix with traditional painting methods doing organics with contrast and things like armour and guns in the traditional way.

Why is it important to Matt varnish after?

that’s a really nice wood effect, love it. Are you going to paint the rest of model in contrast paints?

Thanks for the tip. I did some wood in the “wood” named colour… and it turned out too dark for my tastes, so good to know I can use this colour instead.

Drove 12 hours only to find I had some pics on my phone after all…tho not Fallout.

The one with the human in the center:
The green skin was done in the paler green contrast, don’t remember the name right off.
The skin on the human and other zombie were done in contrast Skeleton Horde, with a further flesh wash over the human.
The black clothes are Contrast Templar Black.
The gold armor I washed in the Horde.

The ones that look like ghosts:
The two to the left of the picture (The forgotten green and Griffin something Grey), and the bright blue (Aethermatic Blue I think it’s called) one are pure contrast paints. Nothing else.

The one with the spiky zombies:
Various combos of either straight contrast (same green as all the others) or using the contrast as a wash over a “standard” green paint.

You can mix and match contrast and standard paints, I finf that a good way of getting metallic effects is to put a light metal paint down In stead of the white/grey base coat. Not ww, but as an example.

My only real complaint about the Contrast paints is that is can be difficult knowing what color range you’re getting.

I’ve found that a lot of online stores don’t properly show it, and it’s not on the bottle.

Miniature market has a good indicator, and the in store displays are even better, if you have a local store. So I’d recommend at least looking there before you buy from where ever you buy.

And yes, the effect you get from painting it over metallics is great. Even the darkest colors are translucent enough to allow the metallic effect to show through. I’ll be using it for signage and armor stripes in the future.

This is the best comparison chart I’ve found: 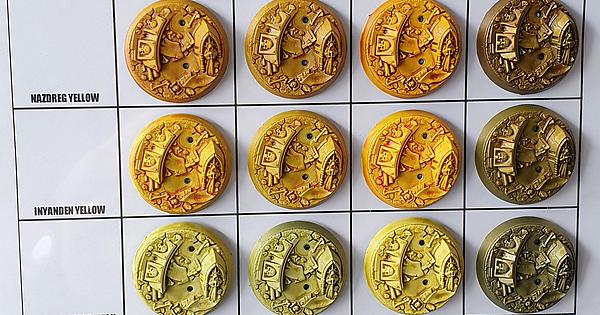