Anyone statted up one of these? 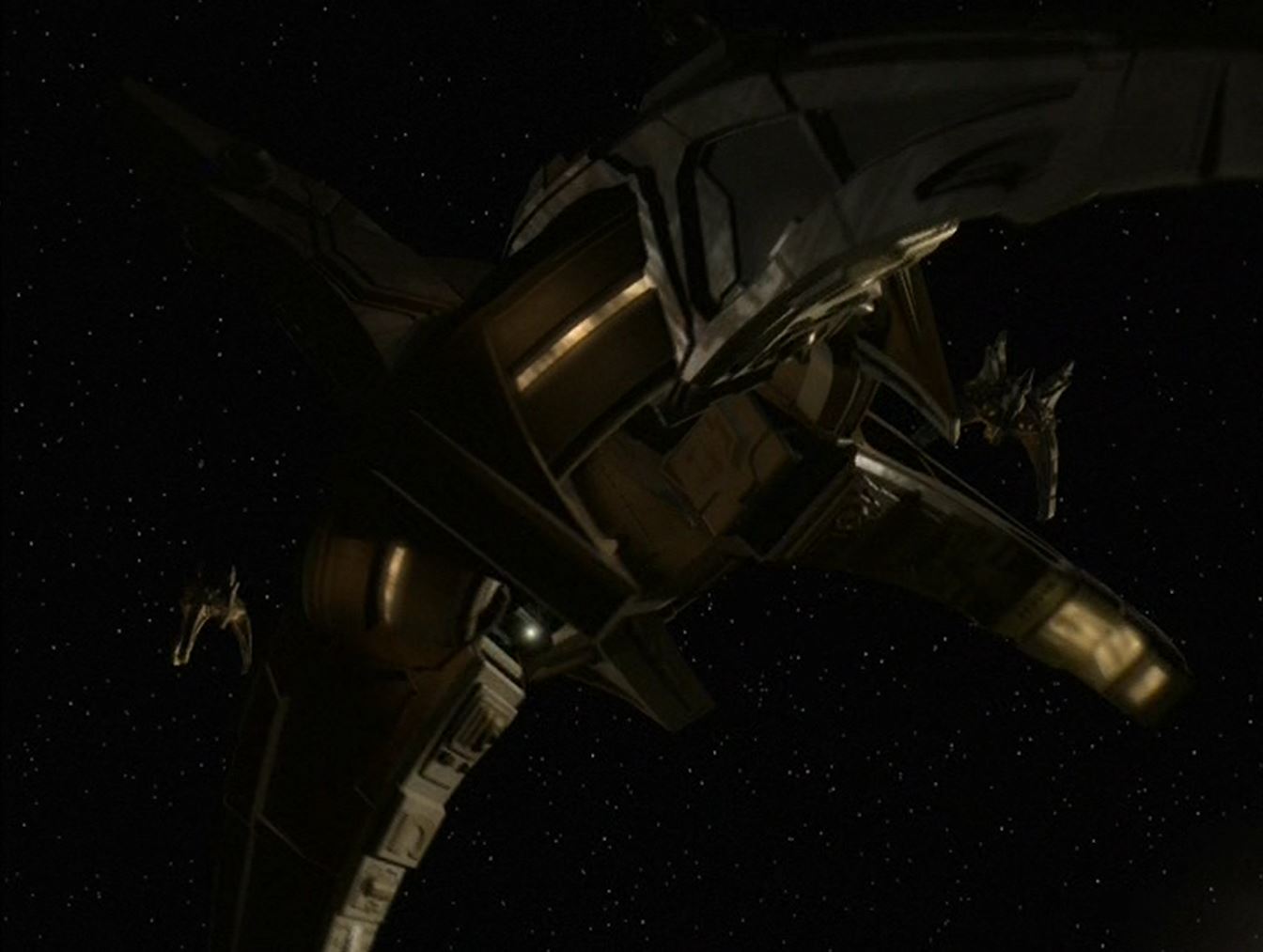 During the Dominion War, the Cardassians developed powerful orbital weapon platforms that functioned as an automated planetary defense system. Designed and developed under the tutelage of Gul Damar in late 2374 as a means of defending their home...

That’s the one, armed with disrupters, plasma torpedoes and regenerative shielding.

They’re 120 meters in diameter, so that would make them equivalents of Scale 3 starships. That’s a place to start, anyway.

Huh, so my gut told me the right thing – I was to handwaive them to scale 3. Let’s do some quick-statting, shall we?

Apart from scale, there are some very obvious traits: Cardassian Autonomous Station being the first, followed by Planetary Defense System and External Power Generator.

First, they’re weapon platforms, so let’s set their Weapons system to 12. Second, they’re probably heavily armed, and Cardassian ships and stations tend to be bulky and heavily armed, so I’ll set their Structure to 11. They’ll need pretty solid Sensors and Computers (for targeting, obviously), so I’ll set both to 9. Comms are also not too much of a concern, so they’re at 8 in my build, while an Engines stat of 6 reflect their dependency of an external reactor.

Their departments are not easy. I’d go with Command of 2, Conn and Engineering of 1 and with neither Science, nor Medicine departments. Let’s set Security to 5, shall we?

As the station is scale 3, it should have three talents. I think Improved Shield Recharge (they’re equipped with regenerative force shields) and Rapid-Fire Torpedoes sound nice, while I re-brand the Secondary Reactors talent to Subspace Power Generator Access.

This makes them a deadly design with their central power source (and average computers) as a weakness.

What do you think?

So, @wasmeister hit it just a few seconds, before I did. Let’s compare: In my build, we go with scale 3, resistance 3, shields 16 (on shield regenerate, 3+3*Threat are regenerated), power 11. Disruptor Banks 9d vicious, Plasma Torpedoes as in the rules.

Planning to use them on my players tomorrow!

Will do, I thought I’d deploy 2-3 against the players Luna class starship. Tomorrow night…

If you’re up for it I’m after a ship design similar to the one the Romulans used in the Enterprise series. A small, highly manoeuvrable ship fitted with external holo emitters and able to camouflage itself as different vessels.

It should have heavy shields and engines, I think, but no weaponry on its own.

wasmeister, you’re trying to stat the Romulan drone from ST: Enterprise? It’s canon length is 36 meters, so it’s Scale 2. Yeah, when I watched that episode I thought the drone was larger since we saw Trip and Malcolm trying to make their way through it to find the bridge. Then again, those small corridors were really cramped and you can fit a lot of small, winding Jeffries tubes (or the Romulan equivalent) in 35 meters of starship.

Someone previously fan-designed a Talent for a starship’s holographic disguise system. It was at Continuing Mission and they fan-statted the USS Incursion, a Defiant variant from the Star Trek: Away Team video game. the article can be found here.

U.S.S. Incursion, a modified Defiant-class equipped with a holographic cloak that allows it to appear as other ships.

The Talent text is quoted here:

"NEW TALENT
Holographic Masking System
(Requirements: GM Permission, Scale 3 vessels only)
A vessel equipped with a Holographic Masking System is able to disguise itself via a combination false
holographic imaging and alterations to the ships warp field. Operating the device requires a Control + Security Task with a Difficulty of 2, assisted by the ships Sensors + Security. The system has a power requirement equal to the difference between the scale of the vessel and the vessel it is mimicking. Example, the Incursion attempts to Mimic a D’deridex-class warbird (Scale 6) requires 3 Power. While masked the vessel cannot attempt any attacks, and attacks against it find the Difficulty increased by 2 for the first attack. Activating or deactivating the system requires a minor action.

This is great work, thx!

I would just give this a trait along the lines of impenetrable shields, and allow the players to come up with a way past them, much like in the show.

I’d also give the platforms themselves the threatening x talent, as they definitely increase the threat of any scene that they are in.

Yeah, the “Threatening X” talent is very appropriate. I’d set it to 1 or 2 at max, as they tend to show up in masses, anyway. In case one wants to be consistent with the rules on scale and talents, I’m not sure which talent to withdraw, though.

Regarding the “impenetrable shields” trait: I would indeed keep the possibility to just hammer the shields down. Circumvent this is highly encouraged, though, as the shields re-charge so fast.

The impenetrable shields would be in the case of the generator. That’s the whole thing with these platforms- their weakness was that they drew power from a single generator, which had shielding a small battlegroup wasn’t able to breach.

Of course you could decide that they modified that design after they were so easily exploited.

(I used the same shield idea for a small outpost, and my crew ended up throwing an asteroid at it. Fun solutions always ensue when pew isn’t a valid path)

Someone needs to put this on a T-shirt.