A Wulf in the Wastes

I got my two player starter set (pvc) earlier this week and have been dying to start playing this game. I ran through the “Getting Acquainted” booklet last night and i may have a friend stopping by tonight to learn the game with me.

If that fails however I’m going to begin the dive into the “Rules” and solo section of the “Campaign” book.

Do you, fellow Dwellers, have any helpful tips for new adventurers just emerging from the Vault?

From one beginner to another:

Buy an organizer box at a craft shop or hardware store for the tokens. It speeds up gameplay considerably and makes for a much smoother experience.

Tackle style organizers? (Box with lid and little divided up spacer cubes?)
I’ve got some extra tackle organizers from a history with another war game.

So far I’ve just put all the tokens into the little “evidence” baggies Modiphius provided. But that’s a great and far superior idea.
Thank you @anon29356271.

I think he means the single tray style they sell at craft stores for beads and findings. Tackle box may be a bit cumbersome, but better if you plan to travel with it.

Also, download and print the latest errata to reference as you read the rule book, some of the rules have changed in significant ways, or just plain don’t make sense without it.

All in all, welcome aboard!

I use a small transparent “single tray” for all the tokens so that we can put it next to the gamemat and take out the tokens when needed during gameplay.

That being said I also intend to get a “heavier” style organizer from the hardware store as I saw on the Wasteland Warfare reddit that here in Germany they sell organizers which fit the game cards perfectly. 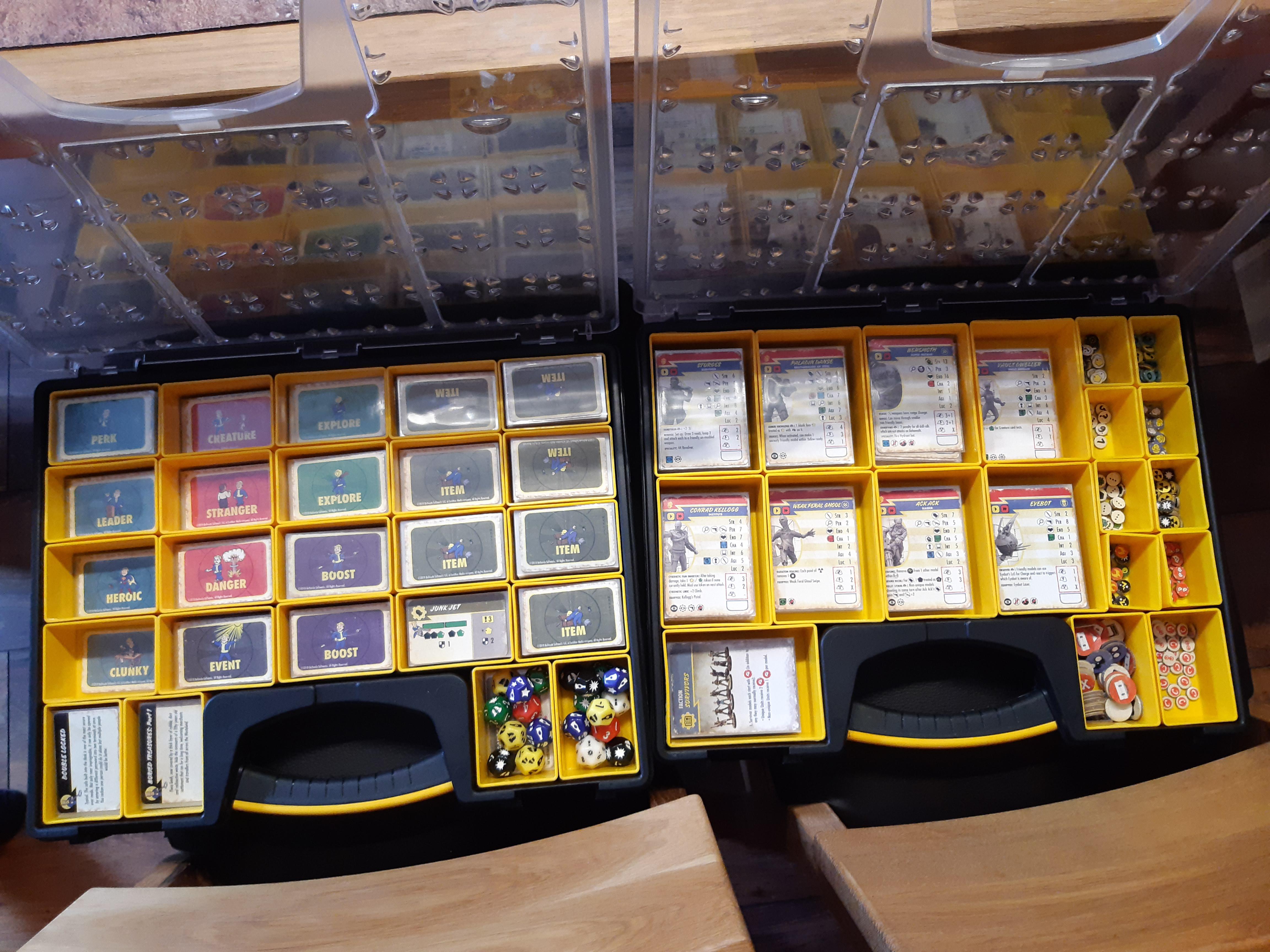 So yeah, in the end I will probably use two organizer formats. Or just put the cards in MTG-Style boxes. If my intention was to move the game often, I would opt for only the bigger organizer but we mostly play at my place. Hope that helped

I suppose i should have been more specific, I do mean the flat tray style.
It just so happens i have a few that go inside the larger box in a manner similar to pullout drawers. I’ll post a pic when I’ve dragged it up from the basement (or otherwise acquired one).

Also, I’m going to (hopefully) get some hot & cold water fixes done to a couple of the models today. Then some primer and start some paint jobs, as well as reset the tutorial mode and crash through it again tonight.

Expect plenty of pics to come the near future.

EDIT: I’ve been thinking about creating a “survivors journal” kind of thing. Like a notebook filled with “in character” notes, thoughts, messages, force lists and of course, battle reports.

I love the journal idea, if you can keep it digitally and post it here, I for one would be happy to “read along”

So, I got ALMOST all of the starter set tokens in their own happy little sections. Unfortunately I didn’t have enough dividers, which means I’ll need to get some more and another box or two the next time i go.

I also own the FFG Fallout starter set, the figures from that (unfinished paint jobs) are displayed in front of the stack of tabletop Fallout game boxes.

I did some hot/cold work on my FOWW models today. A few rifles were bent and two or three of the Deathclaws spines were also laid over. They’ve all been straightened out and I’m looking forward to taking them out to the shed for primer soon…ish.

Also I started my survivors journal along with a new playthrough of Fallout 4 in order to make sure i get MY lone survivors backstory correct. I’ll post the first journal entry here a little later tonight.

Ok, so before i drop the first “in character” update to this hobby blog, I’m going to give myself some rules to keep things interesting, I’m also going to be following the quest-line(s) from Fallout 4 when applicable.
Also of note, I spent some time the other day determining the Day 1 SPECIAL of the Lone Survivor Loner. I’ll use these stats for my character until… Probably after meeting Preston and gang.

For a general hobby update I did a little painting last night.

I used Army Painter Ultramarine Blue for the male and female lone survivors jumpsuits and picked out the leather pads and straps. I also did the ghouls vest and tie.
Plenty more to go on these with detail and washes.

I may need to get a finer tip brush for some of these straps/duct tape banded areas.