The Klingons and TOS STLs were released like a month ago (ish), and I don’t know when the Borg were released, but I didn’t see them a couple of weeks ago, so they’re releasing quite regularly. I imagine we’ll get TNG Federation party fairly soon, as they’ve already made the physical minis. Romulans and Cardassians are also pretty likely.

They did the Klingon and Federation tiles quite a while ago and haven’t added to it. It’s possible they’ll revive this aspect with the STLs etc, but I wouldn’t hold my breath. I’d like them to do it, though.

I’d be fine with pdf tile packs. A lot of people play online at this point and those who play in person can do printouts I suspect.

Printing full color tiles has some minor issues, aside from needing a color printer.

I think about using the tiles, but end up drawing on a white board.

I’d just print on thin(nish) card, then I’d probably laminate it. Whatever you thickness can get away with in your printer. And yeah, it can get about expensive, but when you’re paying £2 per tile (£1 per side) plus p&p from Modiphius then the savings will come quite quickly. You also don’t have the issue that if your tile is damaged, you have to either replace the whole set or go without that one (two, really). You can also easily duplicate rules so if you want to create a room using both sides of a given tile, you can just print it out again.

I’d only get the physical tiles if they’re especially high quality, so I can’t replicate it at home for £32 for the set.

Does anyone know of any good sources for maps? Either as a general source or specific maps that are good? I have the Modiphius Fed and Klingon ones, but it would be good to expand, especially for the more common ones (especially Borg, since I’m getting the STLs, and probably Romulans and the usual suspects).

Of course, if Modiphius would like to hint that they’re producing more and so I should consider waiting, then I’m all ears…

Fair enough.
I have been considering purchasing a laminator…

We’re planning on releasing the remaining STA minis sets as STLs. No plans for new minis or tile sets.

I’ve been thinking about this list, and I’d love (also trying to keep the list practical, since I’m sure while STA is popular, were getting into smaller and smaller niches:

Those would round out the collection and make representation for the major civilisations in the game. If we had those, I think the bulk of play would be covered. I’d love more…however, you’re getting into diminishing returns at that point. They’re the major aliens that appear in multiple series. And to be honest, the map tiles go a long way, but compared to a lot of other content, I’d imagine are relatively low effort.

I think it would be really nice if we could have a Dominion set as well, although I recognise that while they’re one of the only races to have practically an entire series revolve around them…they only really appear in one series.

Look at my post or my Google drive about Star Trek VTT map content.
I used Star Trek online and the Gimp (both free software) to create all kinds of Star Trek related png files.
You can use these png files in your favorite image manipulation/VTT software to create your own maps.
The process of creating the png files is easy but very time consuming.
It was my hope that I could gather the help of several members of the online community for creating more png files but that failed. If you work together you can make a large repository of these png files very fast. Imagine that you work with 4 or 5 like minded people, and they each make 1 png file each week.
You would would be able to create around 15 or 20 different png files each month, or 240 png files a year.
If you combine Star Trek specific png files with the other VTT content (see example below) you can create beautifull maps.
But hey it failed because there was nobody that seamed interested to contribute.
I didn’t abandone the project, but for the moment I have no time to create new png’s.

Now that we known that Modiphius will not release VTT map content, we must make it ourself. In the file below I explain how I create my own VTT content. I hope to inspire people to do the same. As the proverb says “Many hands makes work light” I will post my content regularly in this topic. Creating your own VTT Content.pdf (216.4 KB) 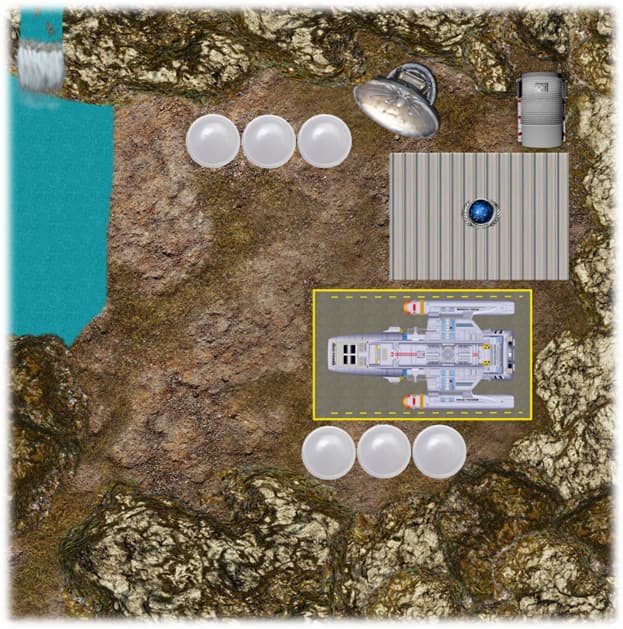 I have been considering purchasing a laminator…

@BillPitt In case you are interested in a case study:

I use thick paper (200g / m² iirc, but 100-120g should be very fine, a typical printer at a typical home should work well with at least the 120g/sqm paper), glued on both sides of the cardboard one finds as the back of a college blocks. The latter are basically re-growing resources in my household.

Instead of laminating, I use transparent foils one uses to protect books (e.g. school books) that come with glue on one side.

The stability of the produced “compound”-cardboard is compareable to the stability of typical punch-out cardboard tokens you find in tabletop games or the STA Starter Set. All you need is a printer (though with 200g paper you might need to go to your local copy-shop anyway) and a pair of (really stable!) scissors.

Regarding maps: I really like the "blue-print"y lineart in the Modiphius products (cf. e.g. the outlines of a transporter room etc). With a set of standard-objects and some lines, it shouldn’t be too hard to draw some maps from scratch in a fair amount of time. But learning this is almost at the bottom of my todo-list, I have to admit.