Origionally posted to the old forum by
David Thomas
I put together an Unofficial Rules FAQ for the 2d20 rpg.
If you have any other frequently asked questions, let me know.

Unofficial 2d20 Conan Rules FAQ v4.5.6 Written by David Thomas Character Creation Is there a way I can tell if I missed anything during character creation? By the end of character creation, you should have: 62 total Attribute points 24 Skill Points...

Here is a rules summary cheat sheet for the Sorcery Rules:

Here is a Character Background sheet for character creation based upon the TSR Conan RPG Character Folio:
https://drive.google.com/file/d/0B_hiUrL-PNn0VnhUVFQ0NWh6UTQ/view?usp=sharing

Finally, a link to my Google Plus Blog/Collection, where I post a lot of news and creations for this RPG:
https://plus.google.com/collection/QtNwm

The Unofficial FAQ and the Sorcery sheet are quite handy!

Maybe they can be extended with Q&A related to the other source books?

Invaluable. All the FAQs and erratas should be more visible, collected and easier to access.

Can we pin this thread?

Could we have a re upload as Google plus is closed ? Please

Another great place for links to help and additional content: 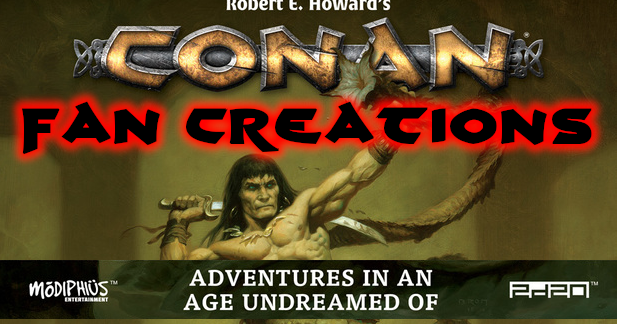 A listing of fan created reference, indexes and record sheets for Conan 2d20

I recently updated my cheat sheets there to include Archtypes as well as the stuff from the more recently released books.

Thanks! I’m curious about Mobs. I’m halfway through the quickstart adventure to try out the system with my gaming group, and I’d like to try turning some of the Picts into a mob to see how that plays. Can anyone give me a simple summary of how that should play, or link to an explanation if there’s already one out there?

Here are the rules on characters as mobs from the core book:

GROUPS
Many adversaries work effectively in groups, achieving
more as a collective than they can as individuals. These
are variously referred to as Mobs and Squads, the two
terms reflecting a number of common differences between
otherwise similar groupings.
A Mob consists of up to five identical Minions acting as
a rough, unruly, and poorly disciplined group. There is no
distinct leader, and while the Mob is more effective in battle
than the individuals that comprise it, it is still a poor force
and often falters against a more disciplined foe. Groups of
natural animals often form Mobs, especially when there is
no distinct pack leader.
A Squad consists of a single Toughened creature —
referred to as a Leader — leading up to four identical
Minions. The Minions’ abilities are put into direct support of
the Toughened creature’s actions, making it more effective
and more resilient in battle. In some situations, a Nemesis
or even a player character can be a Squad’s Leader, following
exactly the same rules.
TAKING ACTION
Mobs and Squads both take action as single entities, regardless
of the number of creatures that comprise a given group.
Each group gets a single turn each combat round, during
which they must all take the same action.
When a group takes an action requiring a test, nominate
a single creature within the group — in the case of a
Squad this will always be the Leader — to lead the action.
This creature is the one taking the action, for all intents
and purposes. Each creature in the group not leading the
action contributes a single d20 to the test, using their own
attributes and skills, effectively assisting the nominated
creature’s actions. In the case of a Mob, all the creatures’
attributes and skills for a given test should be the same,
regardless of which creature is leading the action.
The dice gained from being part of a Mob or a Squad
are, as already noted, a form of assistance (multiple characters
contributing towards a single task), and thus do
not count towards the normal limit of three bonus d20s.
Consequently, Mobs and Squads can still benefit from
bonus d20s in the normal ways — spending Doom, spending
resources, etc.
ATTACKING GROUPS
When attacking a Mob or Squad, a single creature within
the group is nominated as the primary target. It is to this
creature that damage and effects are caused. If the damage
is enough to inflict one or more Harms, then that will take
out a single Minion (as normal — Minions are taken out
of action by a single Harm), then any remaining damage
is applied to the next creature in the squad. If this too was
enough damage to inflict a Harm, then that creature is
taken out as well, and any remaining damage is applied
to the next creature. This should be continued until either
no damage remains, or until all the creatures in the Mob
or Squad have been taken out of action.
Some damage may inflict 2 Harms simultaneously —
Minions normally have 5 in a particular Stress value — so any
hit that reduces them to 0 Stress will also inflict 5 damage.
This takes only a single creature out of action, as Harms
inflicted on one creature do not carry over to the next, only
the total amount of damage.
In the case of a Squad, the Leader will always be the
last to suffer damage under normal circumstances, with
the Minions in the Squad being taken out of action first.
Attackers may spend two Momentum on an attack in
order to pick the Leader out from within a Squad — this
is a called shot, no different to picking a specific hit location.
A Squad whose Leader has been slain immediately
becomes a Mob.
Being composed of Minions, Mobs cannot attempt
Reactions. Even though Squads are led by Toughened
creatures, a Squad cannot attempt a Reaction either.
A status effect can be applied to the entire group equally
(a hindrance upon one member of a group will impair them
all), or the gamemaster can decide to narrow the effect’s focus
by inflicting one Harm upon a single creature in the Mob or
Squad (the creature is abandoned, left behind to keep it from
slowing down the group), depending on the circumstances.
A Mob or Squad has a number of additional ways to
spend Doom.
■■ Interpose: I f an allied creature within Reach is
targeted by an attack, the Mob or Squad may spend
one Doom in order to have the attack targeted against
itself instead.
■■ Special Weaponry: S ome groups include special
weapons or attacks employed only by a single creature
within the group. Using these special weapons
or attacks costs two Doom; one creature makes a
separate attack instead of assisting during the rest
of the group’s attack. This attack may be directed at
the same target as the rest of the group, or a different
one, as desired.

Much obliged! Looking forward to trying it out.

I have a question. I just created an account and can’t find the create new topic button, but this post is most relevant to my question.

I’m confused about soak when shields are involved. The rules don’t feel very clear on this. Do you roll 2 or 4 combat dice (depending on type of shield) and add up the scores or do you only get the additional soak bonus from shields by scoring an effect when you roll your combat dice granted by the shield quality?

Clarify this for me. Thanks!

Shields get the Shield X quality. This gives the wielder cover soak which means you roll the amount of combat dice equal to X to determine the soak the shield gives for that specific attack.

I see. So if you roll a 2 you get two bonus cover soak. Quite powerful. I assume it works the same with morale soak.

It makes that Inspiring Leader talent very powerful as a result.

Thanks for the clarification. I wanted to check if the player in my table was using the shield correctly.

Was crossing my fingers for it only triggering on effects though. Only so it can speed up combat even more. But I won’t deprive my players of any boons they can get if it is raw. They are challenged enough as it is with the kind of adventures those dog brothers get up to.

This is probably the wrong place for this, but here goes LOL . . . How are pets dealt with? Do they have their own slot in initiative? Does it take a minor action to have them act/ control them?

Any help would be great! Thanks!

You can find information about pets in the core book and the horrors of hyperboria books. That being said I have always allowed players to issue commands to their pets as a free action and as long as it doesn’t bog down combat I allow pets to have their own actions (the reverse is of course true for enemies). If they have a bunch of pets I usually use the band/mob rules and allow the pets to act in conjunction with the character in question. I can’t tell you 100% if that is the right way but that is the way I handle it at my table.