I am placing my campaign in the “Dark Time” 2290-2366. The advantage is there is very little canon to obstruct my story telling. The disadvantage, is there is little canon to assist my storytelling! LOL Continuing Missions has an article for this period which specifies a time for First Contact with the Tzenkethi, and for the Cardassians. I cannot find any canon reference to either event. Have I missed something, or is the author a better detective than I. Or is the author making it up? Can anyone assist me?

The time of (official) first contact with the Cardassians has never been established in canon. So yeah, the author is making it up, likely because there is no canon information available.

Definitely a dark time though. I think the most notable event is the battle of Narendra III and the subsequent destruction of the Enterprise-C.

If you are looking for canon information, I suggest Memory Alpha. 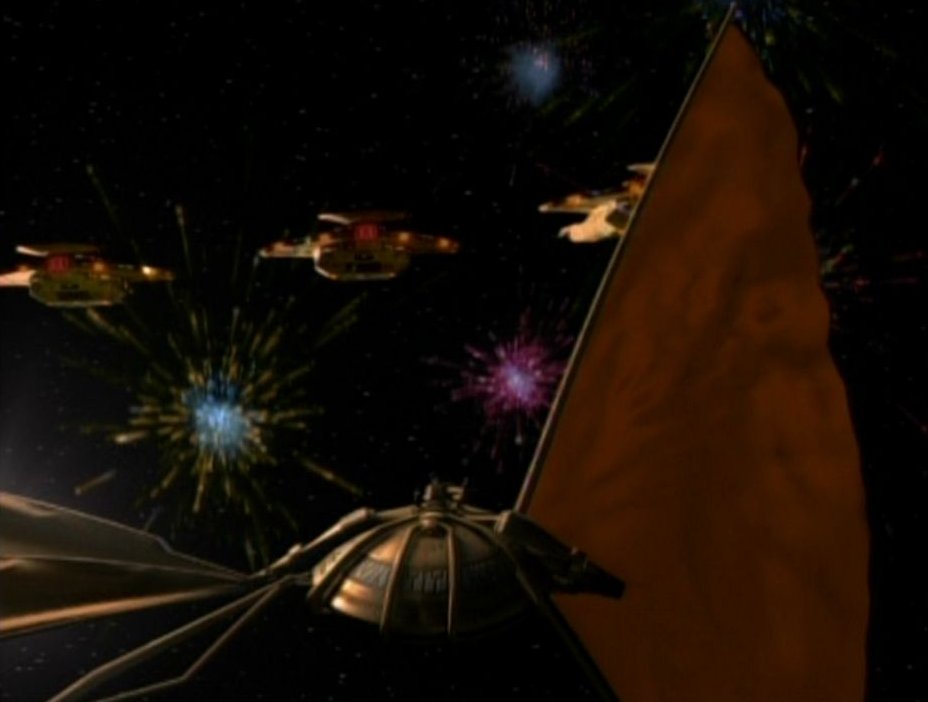 Cardassian history was the history of the Cardassian people, probably one of the most brutal histories of the species of the Alpha Quadrant. In 2369, evidence was discovered that suggested many of the galaxy's humanoid races were descended from a...

Used it for years, thanks!

There is of course the possibility that info can be borrowed from the licenced works - memory beta has a lot more strange things within its pages, but also what I tend to use as helpful hints that can often make a lot of sense.

There are several different trek universes of note…

The problem with Memory Beta is that of “what counts?” Memory Beta includes a lot of things, but excludes a bunch more.

Your timeline has a bunch of interesting references in TNG, DS9, and 2293 includes the Generations movie… and Voy: Flashbacks. In both, we see that the uniform is still turtlenecks and maroon jackets.

2344, we see Maroons with turtlenecks. (TNG: Yesterday’s Enterprise)
2348, we see Jack Crusher in maroons, but without the turtleneck. (TNG: Family)
By 2361, we see the TNG uniforms, thanks to Tom Riker… (TNG: Second Chances)

If you crawl the timeline on Memory Alpha, there’s actually a good bit hidden year by year.

2344, we see Maroons with turtlenecks. (TNG: Yesterday’s Enterprise)
2348, we see Jack Crusher in maroons, but without the turtleneck. (TNG: Family)
By 2361, we see the TNG uniforms, thanks to Tom Riker… (TNG: Second Chances)

Incidentally, as Data graduated Starfleet Academy in 2345, and O’Brien enlisted that year, both wore the crewneck version of Movie Maroon uniforms when they first started out (the crewneck version is in use in Yesterday’s Enterprise, and seems to be in use as early as Picard’s early years in the 2320s). They started using the modern combadge around 2348 (seen in Jack Crusher’s hologram), incidentally the same year Chakotay graduated from the Academy. The changeover in uniforms seems to have happened a few years after - around 2350 - so the early years of conflict with the Cardassians would have been fought by officers and enlisted personnel in the older maroon uniforms.

Lining up crew ages with other known events in-universe, I find, has an effect of grounding a lot of details and providing perspective.

Before 2355 as Picard’s though maker induced flashbacks featured the TNG season 1-2 uniforms.

Lining up crew ages with other known events in-universe, I find, has an effect of grounding a lot of details and providing perspective.

I have done this in my “Dark Age” campaign. Since there is no set date for Tzenkethi or Cardassian First Contact - my players may run into one or both. I used the article on Continuing Mission as a resource and have altered it to fit my timeline. I am trying to extrapolate what noted characters would still be active for inclusion.

Contrary to the “Dark Time” I tend to call the era “Pax Federation”, it’s when the Federation was at its strongest, expanding rapidly and dominating the area with the Romulans still being reclusive and the Klingons recovering from near total collapse of their govenment and the Cardassians still in the process of subjugating their conquests.

This is the era when the Federation went from about 30-50 member worlds to over 150. That’s basically a new species joining every year. They added 50,000 starships to Starfleet (probably through the inclusion of member world navies) and the Excelsior class was probably the true icon of the Federation and Starfleet. Though we obviously see the Constitution and Galaxy class as such because of the TV shows, the Excelsior class was the cornerstone of the Fleet from the 2290s into the 2370s.

Sure there were minor wars, but they were generally limited in scope, the Cardassian War and the Talarian War were likely akin to the Boer war rather than say World War I (which the Dominion war kind of was).

I agree that it’s a fruitful time period to play around in. My thoughts on the era overall:

2295 is pretty good as a start point - it’s just after the decommissioning of the Enterprise-A, the launch of the Enterprise-B, and the “death” of James Kirk, so a couple of the biggest icons of the TOS era are gone and replaced. Peace talks with the Klingons are in full swing, with Curzon Dax as one of the major negotiators.

Next major event we know of is a bit over a decade later: we know that the Treaty of Algeron was signed in 2311, presumably following some manner of diplomatic incident. I tend to imagine that this was a) something to do with Federation-developed cloaking and b) something which went very wrong for the Federation (I tend to imagine Section 31 involvement in this - they screwed something up big, and that’s the last anyone heard from them for decades).

So, in 2311, the Romulan Star Empire (which had open diplomatic channels with the Federation during the 2290s, as evinced by the presence of a Romulan Ambassador in Star Trek VI) manages to force a concession from the Federation (no Cloaking), redefines the Neutral Zone, withdraws their diplomats, and aren’t heard from again for over 50 years (meanwhile, they focus on ongoing conflict with the Klingons).

So, the Federation is in a state of peace for the first time in sixty years (since the start of the Federation-Klingon War in the 2250s), and is wary of doing anything to disrupt that. A resurgence in exploration, and a desire to avoid disrupting the peace with the Klingons or the quiet with the Romulans sees Starfleet focus more on the Alpha Quadrant side, with increasing contact with the Cardassian Union (who are, at this point, being taken over by an authoritarian military junta during a period of famine and hardship; the Occupation of Bajor begins in 2319 and lasts until 2369), leading to war in the late 2340s/early 2350s when the Cardassians start to claim Federation colonies on the border. The Cardassians had been known about prior to this - the exiled Cardassian poet Iloja of Prim lived on Vulcan during the 2220s/2230s, providing an early source of information about them - but contact with the culture at large is a different matter to second-hand information from an exile.

Federation policy had been to avoid conflict for some time, as they didn’t want to disrupt the ongoing peace and didn’t want to take any actions that could complicate their relations with the Klingons or spark tensions with the Romulans, but that couldn’t stop a number of small border wars popping up, and lasting longer than perhaps necessary because Starfleet were only willing or able to commit the absolute minimum to these conflicts without disrupting “business as usual” across the rest of the Federation.

I agree that “Dark Time” is a bad name for it… one of the other Trek RPG’s designers mentioned the term, “The Missing Years” — and that’s probably one of the best terms for it, IMO.

I keep thinking this thread will be about night shifts on the ships, where they would darken lights and so on. Not sure how that works for species from planets where a day is, say, 4 hours or 40 hours or 400 hours.

Personally I probably wouldn’t run a “missing years” game because I really enjoy the onscreen aesthetics and well developed canon of the specific eras we saw on TV and in films. But to each their own, I see the appeal of a fairly wide open time frame. First contact with the Cardassians and some of their neighbors could be especially exciting as a long arc.

You have touched upon some of the wonderful possibilities in this period. An article on Continuing Mission refers to it as the “Lost Time”. I won’t quibble. I chose the word in the same context as the “Dark Ages” - which were not so dark as some would have us believe; but in the context of the unwritten period. My campaign will be set in 2391, Kirk is retired from Starfleet, Bones McCoy is working through the collected knowledge of the Fabrini, Spock is off being an Ambassador, Scotty has not yet boarded the JENOLIN, Sulu commands the EXCELSIOR, and his daughter is in Starfleet Academy etc etc. It sounds like a wondrous time to set a campaign. I anticipate First Contact with a couple minor or major races, and much daring do!