Awesome! Where will these updates be posted to?

I’ll likely do short videos and post them here and various social media. I’ll also compile a FAQ for rules questions that will host on the Modiphius site. 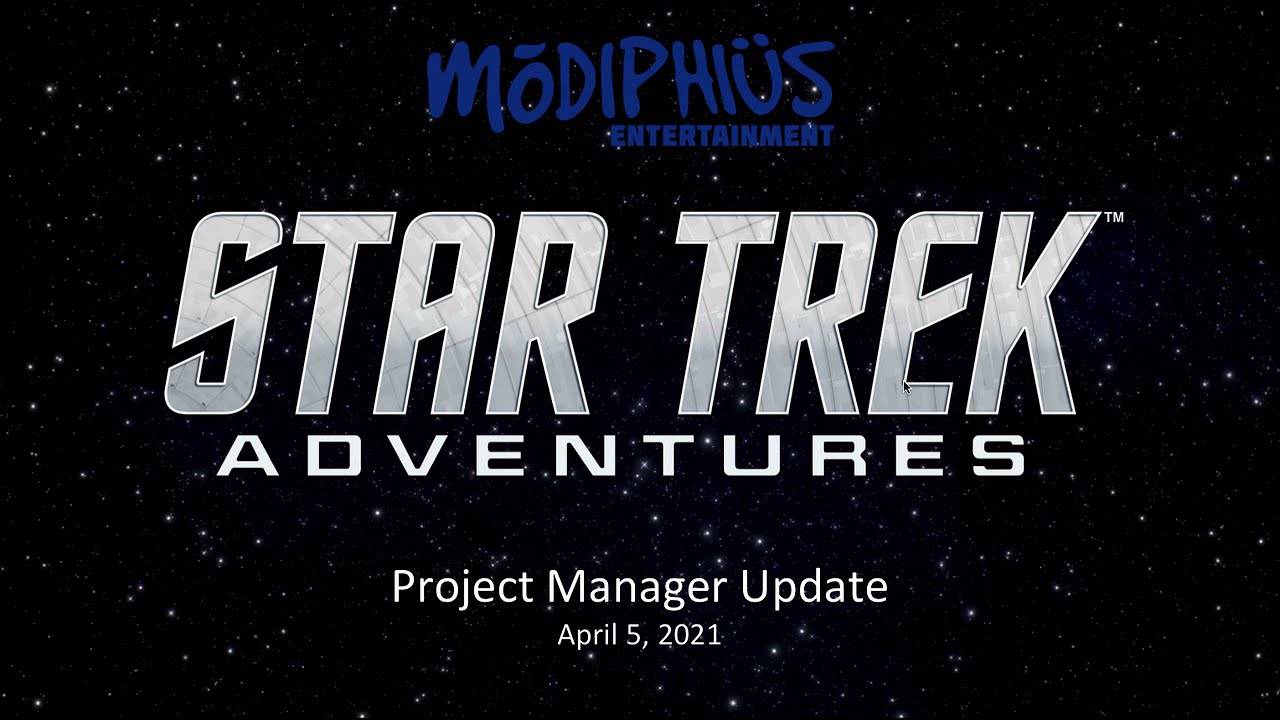 I love this new format a lot, it is great to get answers on many questions that were out there.
I personally was disappointed by two revelations, and I explain my reasoning behind them below:

USS Prometheus: I know that it only appeared in 3 episodes (Voyager Message in a Bottle, End Game / Enterprise Azati Prime) but the same that can be said for many of the other ships in the books. Even in its 3 episodes appearance it became a fan favorite pretty fast, and that was primarily because of the Multi-Vector Assault mode. Other companies followed the fans in that regard: Star Trek Fact Files had several pages dedicated to this ship, Board games have made a miniature of it (Star Trek Fleet Captains, Star Trek Attack wing), Card games have a card of it (Star Trek CCG), Model where made (Eagle moss, Furuta,…), and several Computer games covered it pretty fast in their game (Star trek Online, Bridge commander,…). So it’s very strange that the RPG won’t support an official space frame for it. The side bar of the Gamma Quadrant book covers the basics of the MVAM but not everything we see in the show, and that is the automated combat capabilities of the ship (Rules for one character controlling the 3 ships / or offering a damage bonus in some way / Or let it function like a squad: +1d20 and +1 Challenge Dice). The ships also has so many new features that would make it very difficult to create with the existing rules (Number of Talents = size / Size 4):

This would make the Prometheus ship a Size 5 Ship, or you could change the rules by saying that the ship can only use its Regenerative shields when it is not in MVAM. And maybe you even need to make some special character talents that improve the use of the MVAM feature.

VTT Objects: I know that the game combat system is more abstract. But still Modiphius released 2 Deck Tiles (Federation and Klingon), and various miniatures (expensive ones if I may say), and you even added the Red Alert rules for changing it into a board game. That logic is a little strange. Now the VTT is in development and that is great. But if you are creating support for VTT application you need to create content to go with it. What maps are we going to use for our VTT’s? A logical step would be to release a great number of Deck tiles for various races (Romulan, Borg, Dominion, Ferengi, Cardassian, Breen, Bajoran,……) at the same time you release the VTT feature (or monthly at least, or offer them as additional content when buying adventures). You guys can even work together with Star Trek online who has all that material already in 3D. I personally think you are missing a great opportunity to sell VTT material.

I agree. Great format, thanks for the work and thanks for engaging with the community like this. It’s always nice to hear the design background of certain decisions, this makes me understand the situations better.

But I’m also confused about the decision behind the Prometheus class. The number of episodes it appeared in should not factor in at all, since the books feature ships that appeared in even fewer episodes, down to 0. You are right though that you can extrapolate what a space frame would look like, but considering that the Prometheus is a fan favored ship (as @Phounix pointed out) I would have loved it to appear as a space frame in one book.

To be clear, I’m not demanding free stuff here. I’m contempt with the space frame I came up with, but I’m really hoping we have not seen the last of the Prometheus class.

I guess you could argue that the Prometheus is never established as being a full production class on alpha cannon is it? I think it’s the only ship we really see that is the prototype as opposed to being just one of a class, without seeing more of them.

I think this is an interesting discussion for another thread maybe.

Personally I would have no use for the VTT content you are after, as I very rarely put down a map, but I see why others might want it.

In my opinion in the Enterprise episode Azati Prime there is one canon evidence that the Prometheus Class became a production class. In 2154, as Captain Jonathan Archer was preparing to undertake a suicide mission to destroy the Xindi weapon in the Delphic Expanse, Temporal Agent Daniels transported Archer through time to witness the of Battle of Procyon V. This battle was fought in the 26th century, and was the final confrontation between the United Federation of Planets and the Sphere-Builders. In this Battle a Prometheus class ship fought alongside the USS Enterprise-J, a Dauntless-class starship, and a Nova-class starship. Since the ships prototype was build in 2373 and the battle takes place almost 200 years later, so that can hardly be the USS Prometheus but a sister ship off the same class.

Like I said, there are no current plans for a Prometheus space frame, though that may change in the future. There are a number of game design challenges involved in implementing the MVAM and even a separated ship (how to handle a Galaxy class fighting with both the saucer and stardrive section). Best I can say is stay tuned, but don’t hold your breath.

We’re aware there’s interest for it; if there’s a future product that it makes sense to fit in a space frame, we’ll figure out how to fit it in.

And please, other people post questions to the form too. I’ve got 14 more from one user, and I’d like to avoid it being focused on one person’s queries.

@Modiphius-Jim Ask and ye shall receive.

I just filled out the form with a question for you.

That will be m, sorry for all the questions

I had them laying around for a long time and I’ve a day off and all the time in the world.
So no more question at my end for a couple of weeks.
Tomorrow back working at the hospital figthing Covid 19.
It would have been nice to have Voyager’s doctor fitghting the dam thing, so we could go back at the gaming tables.

@Phounix thanks for your work. keep on fighting.

@Modiphius-Jim I’m not half-way through your presentation, but definetly sold on the Flotter appearance. This is something that needs to exist.

I dunno, Jim. There is such a thing as too much of a good thing.

Does that mean a Bynar-Miradorn double feature flipbook adventure won’t catch your interest?

Oh, hell no, Jim. Those bi-hemispherical foreheads on the Miradorn creep me out. (And let’s not get started about how 90% of the Miradorns are telepathically-linked twins.) * shudder*

And the less said about the Bynars’ proto-Borgish culture, the better. (Seriously, ew.)

There is such a thing as too much of a good thing.

I concur. E.g., having two Picards in the same movie wasn’t the best idea Star Trek writers ever came up.

But Team Flotter-Kukalaka sounds like an interesting challenge for a writer. Yet this Flotter Holodeck-Adventure… This needs to exist. Really, I’m dead serious.

Thanks Jim! Would love to see some STO-related content, so glad to hear that you’re continuing to develop your relationship with them.