Modiphius announced yesterday at ModCon that they will be rereleasing the long out-of-print JCOM miniature line as STL files soon! There were no other JCOM announcements, but I am excited by this news!

Let’s keep our fingers crossed that they might add a few new miniatures to the mix in the process. Modiphius now employs a number of sculptors who are sculpting dozens of new miniatures on a bi-monthly basis for their Fallout products. It would certainly be nice at the very least to see perhaps some of the creature models with different poses (white ape or banth). I own three copies of the current banth model and they look a little too similar when placed next to one another. Thoats are also so essential for narrating Barsoom, and it would be nice to have at least one thoat model to show players. 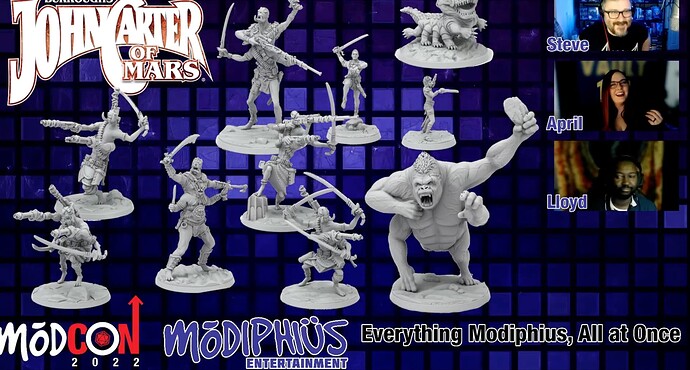 Great news! I don’t have a 3D printer, but I know some people who do, and this is a way better option then my current choices of 1) Insanely expensive incorrectly scaled minis from the Heritage line or 2) Nothing

Are they going to be printable as one piece? The originals were a pain to assemble at times.

The STL files are fully supported but are still subdivided into different pieces as they were in the original Cornish resin sets.