In Wormsign, what does the deck of Tarot cards do?

In the quickstart scenario Wormsign, the Bene Gesserit novice Anna Margrave has as an asset a “deck of Dune tarot cards”. I honestly have no idea how to use that.
Is it supposed to be a mystic way to predict the future ? Just some entertainment tool she can use ? Or an even weirder thing that I can not imagine yet ?

It is a way to predict the future - one that some folks are quite often resorting to.

From the comments in the linked video:

Prescience can only allow a single person to view any specific event, regardless of the source or mechanism of that prescience. Having many people looking at the immediate future prevented them from being able to view it themselves, making it suddenly difficult for them to make decisions. (This is probably why the Dune Tarot was promoted, as they had multiple enemies who knew this limitation of prescience.) 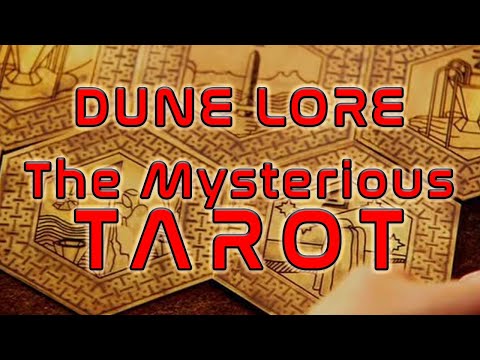 Yup, like all assets its up to the player to decide where it might be useful.
A guide to the future is an option, but a BG might use a reading to manipulate someone or intimidate them even without knowing the future for real.

A guide to the future is an option, but a BG might use a reading to manipulate someone or intimidate them even without knowing the future for real.

A Bene Gesserit using lies and distorted half-truths to manipulate someone? They would never do anything so underhanded! That’s just crazy talk!

Thank you. I really could not imagine a situation where a Bene gesserit could actually use a deck of cards. But using it as a fake “witchcraft” tool to influence someone makes perfect sense, and I love it !

Awesome conclusion to the thread’s question. Unfortunately I couldn’t use it in my group’s Wormsign (yet), because the Bene Gesserit novice Anna Margrave is a playable Pre-Gen PC. She’s not present in the adventure as an NPC by default. My group already has made their own Characters. Anyone got ideas of where to utilize her as an NPC?

Tarot Card Deck idea. To amplify the mystery and terror, what if a Bene Gesserit NPC asked the PC’s if one of them is ready to receive their fortune told, and whichever one says yes, you actually deal them 3 cards (and then probably just make up a story about it on the spot).

On Roll20, (playing Dune RPG online) this would be easy, as there is a digital Card Deck and you can easily buy/upload a Tarot deck, and deal graphical cards to a player or on the tabletop.