The Shackleton Expanse: a Klingon-based campaign

As mentioned in an earlier post, I’m going to run a Klingon-centric campaign set in 2371.

The premise is that various academic and scientific factions within the Empire have convinced the Klingon Defense Force and Chancellor Gowron to sponson an expedition to explore Klingon history in an attempt to discover what is myth, and what is real. Relics of civilizations thought long extinct have been found, activated and otherwise toyed with in recent years. Who were the Iconians, the T’Kon, the Old Kings, the H’urq, the Fek’lhr? Have they truly passed into history?

Much fanfare is being made. The legendary Dahar Master Kor will command the expedition. His former command, the battle cruiser Klothos, is being refitted and outfitted for the mission…. and gifted to House Kor, in recognition of the many contributions that house has made to the Empire. Many of the officers and crew who served with Kor in the past are volunteering for the mission. The finest minds: lore singers, archaeologists, physicists and engineers are being recruited.

The reality is somewhat different. “House Kor” is a house of one, that will die with its namesake. Kor is out of favor with Gowron, and a potential political rival. Kor and his supporters are being put onto one old ship and sent off into space. Klothos is almost 200 years old at this point, having been converted to a tanker and then mothballed, his primary weapons long since dismounted and only secondary disruptor banks remaining. The upgrades and refits will significantly improve Klothos’s capabilities, but he is hardly a first line warship. The experts recruited as scientific staff are on paper noted leaders in their fields, but are also considered crackpots or politically unreliable.

Gowron thinks he has laid the perfect trap of honor, for how can Kor refuse the assignment…. and of course Kor does accept… but a trap one knows is a trap is also an opportunity. Gowron and his sycophants have forgotten who Kor is. It is time they were taught anew.

The campaign will take place in the years following the deaths of Kang and Koloth, in 2370.

I plan to use much of the Shackleton Expanse, as well as other STA modules and several old FASA, LUG and Decipher adventures I have sitting around.

It’s a great idea for a campaign, but one that seems destined for a tragic end. Remember, only four years later we see Kor in Season 7 of DS9 friendless and desperately seeking Worf’s help while the Dominion War is raging in 2375. Then again, a great many stories are tragedies and this campaign could be an in-universe Hope Spot for Kor before he heroically fails this mission to the Expanse and is later forced to seek Worf’s help.

And, of course, there’s the possibility that your campaign is your own headcanon and the Dominion War is not even in your campaign’s future so you don’t even need to take “Once more Unto The Breach” into account at all. That’s equally valid too.

Well, Kor is a drunkard so he may very well meet his fate… that’s how and why I plan to use him as the captain and expedition commander. He will be unavailable to make decisions a lot. 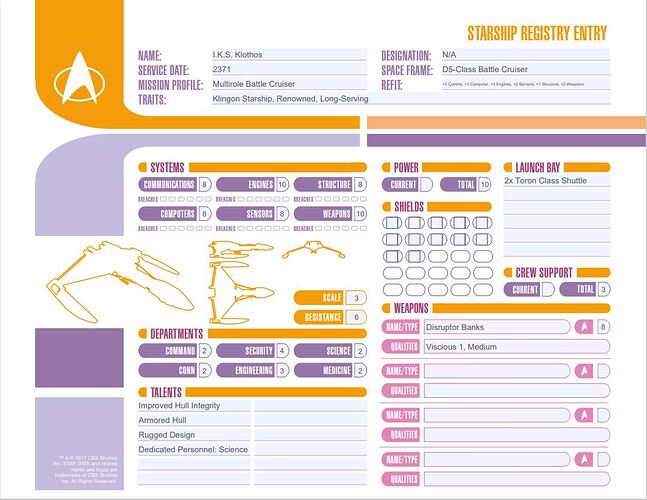 Two centuries ago, Klothos was a cutting edge design. Now most of his more complex systems have been removed. Much of what remains is laughably simple by 24th century standards.

…but the old grishnar cat does still have some teeth.

Klothos has no shuttlebay, but two Toron class runabouts are docked at two of the deuterium tank hardpoints: 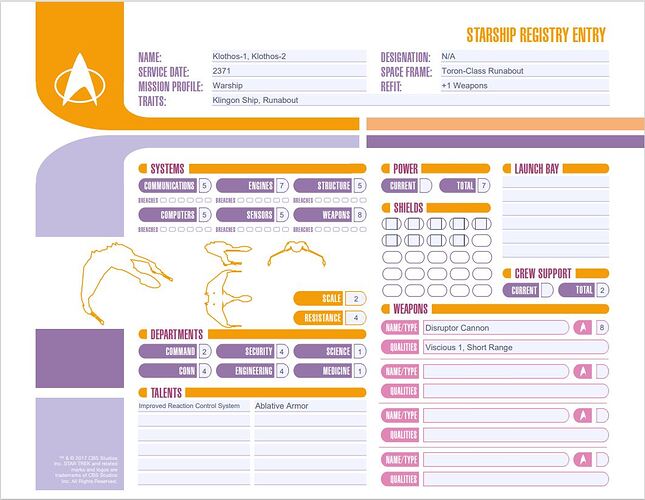 In my Trek universe, runabouts are starships. The Toron class is equivalent to the Danube class, somewhat less capable and less flexible.

Is Armored Hull supposed to be Ablative Armor? (That plus Improved Hull Integrity explains the 6 Resistance at least…)

Scale 3 but has 4 Talents? Am I reading that right? How is that 4th Talent justified? I’m genuinely asking because I don’t recall seeing anything in the Refit rules about adding Talents (I could be wrong).

Armored Hull is what I call older versions of Ablative Armor. It works the same.

The character development rules allow a vessel to gain one additional talent after completing an arc milestone. Klothos has existed for over 200 years. I’m sure he has had the opportunity.

Game mechanics-wise, the ships stats are low compared to most 2371 vessels. Also, the Disruptor Cannon and Photon Torpedoes the ship would normally have are removed. I don’t think giving a couple extra Science based supporting characters was too unbalanced.

You know that you are narrow-minded when the first thing you think is: “Why on a Starfleet sheet?”
Yes, yes, I’ll now go home and think about my life.

But yeah, MisterX, this is why Cory Belote and I made our non-Starfleet starship PDFs. At the very least, check out the Klingon ships folder. Mr. Gone and I just completed the Discovery era Klingon ships and they’re all pre-statted from the Discovery Campaign book.

“I wanna go home and rethink my life.”

Damn I knew I should have double-checked this.

You know that you are narrow-minded when the first thing you think is: “Why on a Starfleet sheet?”
Yes, yes, I’ll now go home and think about my life.

An application that you can use to create characters and ships for Modiphius' Star Trek Adventures RPG.

Their Klingon sheet doesn’t have a resistance box.

Their Klingon sheet doesn’t have a resistance box.

But, more seriously, that’s how the published Klingon Ship sheet looks. Having said that, though, these things are changeable.

…and I appreciate the work you’ve done.

…but I’m the sort who will forget something if it isn’t written right in front of me, and sometimes even then.

If the Klingon ship sheets ever get a resistance box I’ll be happy to use them.

On a vaguely tangential topic, did I mention that my Cory Belote-style Klingon starship sheets that I linked 2 days ago all have the Resistance box? They’re all cool like that.