Star Ships in a Planetary Atmosphere

Question about Ships that can make it into an atmosphere, like an Archer Class Scout. Would you think that ships shields would work normally or at all? Also, how would high radiation effect ships shields in your minds?

IIRC there are episodes where shields are all that prevents a ship from burning up during re-entry.

There are also episodes where the shields are the only thing protecting the crew from radiation.

In Voyager they have done thiis on a regular basis, without crashing, it was a “Blue Alert”

I thought a Blue Alert was the separation phase of the Prometheus when it used its Multi-Vector Assault Mode. Was the term Blue Alert used in VOY for planetary landings of the USS Voyager as well? Maybe I should watch those episodes again.

No recollection on the Prometheus, but, yes, Voyager landed on ‘Condition Blue’.

Yes, Condition Blue/Blue Alert was used in both ways. Therefore, the meaning is based on the context, specifically the ship in question.

There’s also some pressure resistance contest in gas giants against chasing enemies technically it’s atmospheric flight.
Most Starfleet vessels are capable of atmospheric flight. Not all are conceived for landing (Voyager is). That’s why there’s shuttles.
My own concern is about underwater capacity of ship and shuttles, a much dense fluid (usually).
For a published scenario my group had made a submarine on a shuttle chassis for the mission, but except in Startrek into Darkness I wonder what will happen underwater. .

Not a Starfleet ship but I did once have my players exploring an ancient starship that had been hidden under a planets ice sheet.

It was in more or less working order (if you discount the ships computer trying to vent a fatal dose of radiation when they started it up again.)

I think I got the idea from Star Trek: In To Darkness where they hide the Enterprise under water while trying to stop the volcano.

Thanks. I think your talking about a couple of Voyager Episodes, and come to think of it, maybe the tos episode ‘Assignment Earth’

I wonder what will happen underwater

Theres the Voyager Episode 5x09 ‘Thirty Days’. It’s (amongs other plots) about a planet completely made of water. One of the best Voyager Episodes, if you ask me, and worth a watch.

Underwater-pressure on Starfleet vessels (definetly Shuttlecraft and maybe even Ships, can’t remember) plays a minor role in that one.

The real reason I’m asking is that in the next game I’m running, I may have an Archer Class ship having to land on a planet irradiated with Bertold Radiation to save a group of colonists who crashed there and are trapped in caves. (Also the planet is very close to a Red Dwarf thats having s major coronal mass ejection) It plays havoc with their transporters and scanners. They aren’t aware that there’s a Klingon Combat team on planet stalking them. My question is, if the Archer lands on planet would it have full use of it’s shields for protection against attacks?

If you play an encounter of small unit vs ship they will be vaporized.
An attack on the ship by a ship. while landed when colonists are walking in (so shields. down and you can’t put them up without casualties) is a good starting point.
Then engineer may try to partially activate shields (to protect the upside of the ship maybe colonists too), the pilot can take off, but impulse engines may kill people on ground).
Maybe shuffles can buy you time in a size imbalanced fight.
If you want a ground fight have the away team be ambushed into the caves while walking back to the shuttle with some colonists they.had to land because at some point caves are too small and the SFX budget for aerial cave travel was too high. 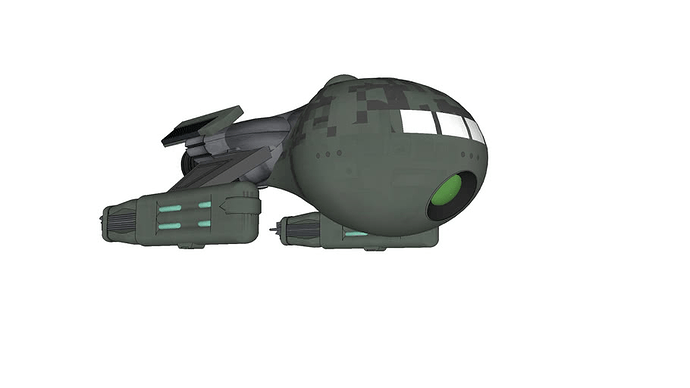 image910×512 79.5 KB
The Kilingons have what I’m calling a Tactical Shuttle, so an attack on the ship is plausible it that respect. I like the idea of having to 'face’the shields in order to safely load the colonists, but the may have to make some hard choices. 300+ colonists will not fit in an Archer Class without some serious shoe horning.
Sutehp September 6, 2022, 1:46pm #14

300+ colonists will not fit in an Archer Class without some serious shoe horning.

The Archer is infamous enough for being cramped for just twelve people. The only way you’re gonna fit 300+ people inside an Archer is if you shove (and disintegrate) about 270 of them into the warp core. Of course, that would negate the purpose of the rescue…

I retconed that to 15, since with players being at 6 that would be 50% officers on the ship. The Captai and XO get single rooms I assume double room for the lower officers and NCOs And Submarine style 'births on the 1st and 3rd deck for crewmen.

one possible solution with the Archer you can setup a teleportation signal amplifier for a bigger ship.

I was reading through some of my material. I use the Archer a lot since I have a great deckplan for it from Starship Dynamics.
The Archer is rated for a crew of 14. A point to note is that all the Trek sites say that the CO and XO each get their own small cabin but the rest of the crew shares cabins (4 cabins so 3 per cabin) and “hotrack” because all the deckplan overhead views only show one bed (rack). This proves to me that too many people are putting out information on these websites while completely lacking it the intelligence to do so. I refuse to believe that the future ships will not be able to achieve the level of accommodation enjoyed by surface ships since the 70’s. Each room has three racks stacked like bunkbeds. But better than current Navy racks. But I digress.

Back to the subject at hand. One of my best game resources is the old Spacedock book from the Last Unicorn Games Star Trek RPG. It has a very good description of ships and the tech on board. Far too detailed and rules heavy for my style of play, but they make great places to pull technobabble out of. One of the things they would note is number of Crew/Pass/Evac. Crew plus Passengers made up the number of people the ship could berth and sustain pretty much indefinitely. Evac was the total number people the ship could cram in (sitting in the passageways and floors) for an evacuation. The number included the passengers but not the crew. I scanned through and located a few “small scouts” where the crew+pass equaled 14, or what the Archers compliment is. All of those ships were rated 4/10/36. Using that as a bases I would say an Archer could stack in 40 bodies all together if you put them in every space available including the lower cargo bay.

Of course you would be overloading life support and could not stay underway for too long. But then that just gives you some drama and extended tasks for you Engineer/Science types.

If I was going to run this, I would set it up in the following ways:

This is an excellent mission for all branches of Starfleet. There’s something for everyone to do. You could even potentially run multiple extended tasks for each character alongside ship-to-ship, ship-to-ground, and ground combat. All of which, of course, must be completed before the CME hits the planet! Good luck to your players!

The logistics of an evacuation would make up an interesting extended task.