A fairly straightforward adventure, set in Corinthia’s Magyar, the Red City. When Lord Numitor’s young son is abducted, the players are recruited to find and retrieve him. Requires roleplay and investigation, plus a plan and either a heist or some combat towards the end. Predictably, not everything is as it seems.
I’d love any feedback, as this is the first one I’ve written for this system. 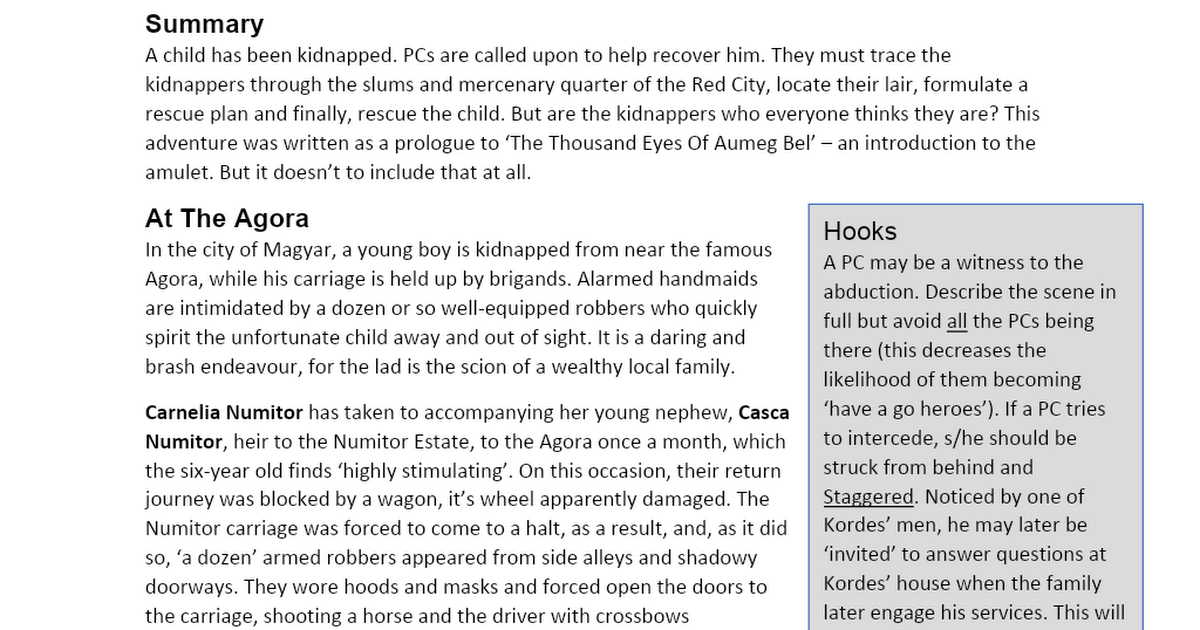 It dont seem to work,

What happens when you try it? It always opens when I try.

It opens for me.

It played well when I ran it and gave the players chance to ‘bed in’ some new PCs in Magyar.
Took about 10 hours of play.

Nice, thanks for an adventure

We played through this last night and considering we finished at 3 am, I am going to say it was quite a success!!!

Our heroes end up in the employ of Ambrosius of Magyar through their exceptional skills. (One rank 5 lore and one rank 5 animal handling.) During this, his son Casca is kidnapped and niece murdered during an outing to the Agora. The group knows of the reward available (the boys weight in gold) and offer their assistance in his return. Ambrosius has shown great anger at his son’s kidnapping. Players were well aware of some inconsistency to parentage of the boy but chose not to inquire further due to the prestige of their employer.

They investigated the ambush site thoroughly and successfully questioned a young boy who had witnessed most all of the attack. Only one of the ambushers had perished, seemingly killed by a single blow of a seax. Through good investigations (or poor GM’ing to offer more enticing lines of inquiry . . .) the PC’s managed to find the house very quickly but little of the other available clues. The Lion was quickly found as the groups local watering hole and again through good investigation they found the sewer entrance but missed the added information of Orban also being one of the people seen to frequent the establishment.

This brought us to the assault upon 19 Westgutter Street, through the connecting sewers between the house and the Lion. Sneaking in to the cellar, the Beastmaster managed to send the Corinthian manhound back up the stairs when it came searching for the steak the PC had brought with him.

Hidden in the cellar until midnight, just as the PC’s thought to make their move, upstairs the thugs begin to awaken, pack and ready to leave. The knight and several of his Bandit Thug “men-at-arms” moving down the corridor to the sewer so they exploit and open fire! The brave Knight discards his fouled and useless breastplate and warns the intruding PC’s to leave at once but is overwhelmed do to his severe wound along with his “men-at-arms”. “Protect the boy!” he yells up the stairs as he is slain! The manhound’s master is also slain in this battle of the basement. Proceeding past the trapped stair, Malek whips a warning axe at the door frame, gives command to the last of the thugs and proceeds to the upper floor. “I will not allow the boy to be sacrificed!” he exclaims. The thugs were no match for the wrathful PC knight but upon arrival at the second floor, three doorway confront the group. “Find Malek” leads to an empty room with an open window and a fluttering curtain. The observation lead to no concrete direction so once outside and another animal handling check to regain the trail, they find themselves back at the Lion and once into the sewer, the track was lost when Malek and the boy entered the water. (At this point, the player playing the beastmaster had some other guests and became distracted. This certainly helped in the escape!!!)

Most every sign had pointed to Nemedia and once looking in that direction, the trail was found and the chase was one. Malek was confronted but not before he had made it to the first small village outside Magyar. The PC’s enter a small tavern as Malek is attempting to hire men and possibly buy horses. Unconvinced by Malek’s story about why he is taking the boy and having no concrete proof for his story, he challenges the knight to duel but is shot by the exploitative beastmaster and despite his status as Nemesis, is quickly defeated and the boy returned to his father.

As I said, a fantastic success!!!

Other feedback . . . (there is a little)
Some of the NPC’s used say “as found in core book” when they were in Conan the Thief. I found them, eventually! Thankfully it was before we played.
There are some conflicting NPC information regarding the kidnapping group. One guy was shown as a berserker in one spot and not in another.

My biggest confusion was around so many characters and who was doing what, It took quite a while to get it all straight, especially regarding Orban. Most of this is going to be on my lack of reading comprehension but a bit of editing could probably have cleared that up a bit sooner for me!! One-Eyed Kordes seemed like he was going to figure in to the adventure heavily and then was never seen again . . . I found this odd . . . However, my players don’t have any ranks or focus in thievery and felt his world was not their world and so he never came up.

Once again, this was a great adventure and a great time was had by everyone. The ethical conundrum placed on the PC’s was excellent and I would recommend to anyone.

I am so excited that you enjoyed it! Thanks a lot for the feedback - I will definitely give in another edit (when I get the chance) and clear up those ambiguities. Again, thanks for taking the time to let me know.
Lodes was intended as a patron for groups that stay in Magyar. My own group slew Malek where he stood (not quite what I’d hoped for) so never left town and they were all generated from Thief so they still work for him.
You’ve inspired me to get part 3 finished!