How to track things in an online game?

I’m debating what to use to track things (momentum, stress, etc). Roll 20 is the obvious choice, but I’m not planning on using maps much if at all, and it seems like overkill.

A 7th Sea game I’m currently in uses a shared online spreadsheet. That works, but I’m wondering if Roll 20 or something similar would have advantages that I’m not seeing.

What are people’s thoughts?

Currently, I as a GM am using a VTT only for maps etc.
Everything that needs to be tracked, is tracked on good old paper, dice are rolled physically by the respective players. We trust each others to not cheat. We’re a group of year-long friends, so YMMV. So everyone can track the variables that concern them, individually.

But what about Momentum, you ask? I, as GM track Momentum with physical tokens. I announce any change to my stack to the players in our voice chat. So some have tokens for themselves, some scribble on paper or a handheld, some simply ask about current Momentum, from time to time.

Everything is pretty straightforward.

Long story short: One can do without VTTs and if you and your group see no apparent reason to use one, you maybe just don’t need it and that would be perfectly fine.

I used a share google drive to share game documents, etc. Roll20 I used a simple text box on screen to track momentum and Threat, laid over a map of the bridge with icons for where each PC usually had their station. It was pretty low-tech, though we did use the STA character sheet with the die roller built in, and that’s pretty handy.

Long story short: One can do without VTTs and if you and your group see no apparent reason to use one, you maybe just don’t need it and that would be perfectly fine.

I’ve run other games without a VTT, occasionally using Google Drawings for maps. In those games we used online dice rollers, although in the 7th Sea game I’m playing in we all roll physical dice. I’ve not used Roll 20 a lot, and I find its interface a bit confusing, so I’m just trying to work out if it’s worth the effort

It was pretty low-tech, though we did use the STA character sheet with the die roller built in, and that’s pretty handy.

I hadn’t thought about dice rollers built into the character sheet. I might have to experiment with that.

My team uses Discord and Owlbear for the combat
For Momentum I made a bunch of emotes and a banner for Momentum and then an overflow of momentum banner for anything past six, for the longest time I was handling it myself but I’m getting them used to tracking their own momentum so they can just click it off when they use it rather than have me do it.

It looks like Roll 20 or similar would be overkill for me. Thanks everyone

I’ve used it for dune and sta. works great.

If your players are going to be using the character sheets on Roll20, having tokens they can edit for momentum, etc, even just on a blank screen I’ve found really helpful. With my players, if they can’t see the resource in front of them they just stop using like they have no object permanence.

I stole my current layout from DocQ on the Modiphius Discord, and it’s probably overkill. I’ve played games with tokens just on a blank screen and found it equally fun. 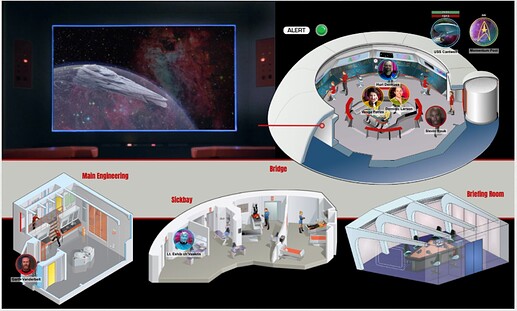 The ship token is tied to the ship sheet and shows shields (green) and power (red), and the Alert button can be right clicked and changed to red or yellow only by the commanding officers. As I said, this level of imagery is overkill - just four tokens to represent Momentum, Shields, Power, and maybe the Alert would be enough.

Do you have a link? I tried searching and couldn’t find it.

I wasn’t planning to use Roll20 for character sheets, but we’ll probably use it for some things. I need to spend some time on it, though, because I’ve not used it much and find the UI confusing.

Same question the name of. the bot please

The bot is called Majel.

Add Majel Into Your Discord Server and Prepare for Die Roll Fun! -

Discord bot for use with Star Trek Adventures roleplaying game. This will help resolve dice rolls and some reference sheets.

On the Roll20 front, the character sheets are pretty good - they have alternate settings for starships as well.

I do maps when needed (turning off the grid) and use it for persistent handouts (including some nice talent cards that were posted on continuing missions). I track threat and momentums through single card decks in my own ‘hand’ and determination the same way in the players’ hands. I use it for sound effects and macros as well.

A lot of the focus is in immersion for me - and it works fairly well for that, but that’s mostly a matter of taste.

I know Majel, but I thought aramis was referring to a different one.

Because I was. Well, mostly. I pulled the name#hash off the one I’ve been using.

How do you add this bot? My understanding is that bots need to be added via their own URL, you can’t just message a discord username to add a bot.

Discord - A New Way to Chat with Friends & Communities

Discord is the easiest way to communicate over voice, video, and text. Chat, hang out, and stay close with your friends and communities.

Yes, I have discord, but every guide to adding bots says you need to go to the bot’s website and add it via a link the bot creators provide. The Majel bot works just fine, I just wanted to see what this one was all about so it doesn’t matter, but I think there needs to be more guidance than just a username. You can’t add it as a friend, and creating a new DM with it doesn’t work, since DMs need a person on the other end to actually join the DM.