After a quick read of the expansion I gad a few questions/ observations.

Is there any advantage to having multiple “building structures” (hut, shelter, lodge) beyond a place to put small structures… Considering these can be expanded to 20 squares you could fit most into one building.

Expansion of structures. It specifically states expanding a “building” (hut, etc) changes it’s classification. Should expanding other structures have a benefit beyond more space for boost structures. For example if you double the size of a barracks structure would it count as two barracks?

Is/ should there be a limit on how large a starting force can be in Survival Mode?

In Survival mode should there be a minimum number or size of buildings to house your force. Let’s say you start with a force of 1000 caps and 9 models, only having a single hut for housing sounds wrong.

How to handle 2+ level buildings?

Overlapping structures: per rules you can not do it. Should you be allowed to add things like a watch rower on top of another building (maybe a second or higher floor)?

How about walkways over the top of a building. Prime example is the Gunners base in a junkyard where busses formed the outer wall. This could be represented in Homestead as a building (modeled as a bus) and a barricade (settlement wall) on one side, plus a walkway on top of the bus. You could then put a Guard Post on the walkway.

It is worth keeping in mind though that this just governs the rules side of Homestead. Although the rules prevent you from having a proper Watchtower on top of another building, there is nothing preventing you from modelling your settlement in such a way that a building has a small outpost on the roof. In fact, it is positively encouraged.

The Wasteland is your oyster! 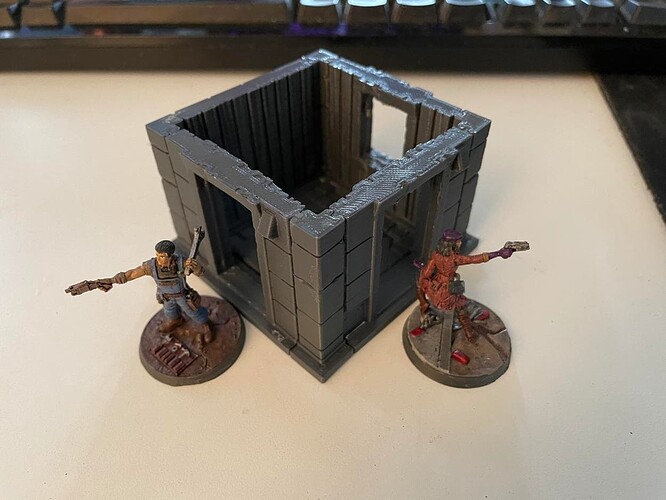 I posted this in the discord, but I’ve printed out my first “Hut” for Homestead. The Sanctuary Hills stl set seems a bit overscaled for the models, but at 70% scale it looks more realistic and is almost a perfect fit for the homestead grid.

For Survival Mode, I haven’t started my run yet but, I was thinking that since a Settlement Scenario can have 200+250 per land = 450 caps worth of defenders defending it, that either 450 or 500 would be a good number to start with. It’s also around a good number of individuals who would likely be trying to settle down, so it seems like a decent baseline.