I am trying to understand a conflict like warfare. Can someone give an example and explain how it affects the quality of an asset?

Basically, warfare works exactly the same way as any other form of conflict.
All of them follow the same rules, just reskined with different assets and zones.

So a duel uses personal weapons as assets and guard areas as zones.
Warfare uses tanks, weapon emplacements and ornithopers as assets, and strategic areas of territory for zones.

Other than that the system to use them works in the same way - define what zone is the critical one and whoever can take control of it with an asset wins the conflict.

I’m a little confused on your question though. The different conflict has no effect of the quality of an asset. Assets have a quality which you can sometimes adjust with abilities and momentum. But that is the same in each conflict type and warfare doesn’t offer any special difference.

The win conditions were to take and move a hidden asset back to either Sindri Palace or the South Gate, for Players/Enemy respectively.
The players moved their assets across the map and used them to attack the enemy assets (Pg 168, Targeting Assets) as a normal Drive + Battle roll.
Other traits were created during play such as jammed comms to increase enemy difficulties etc…

The main difference I see with Warfare compared to Duel or Skirmish is that I feel there is more emphasis on destroying the assets, rather than directly damaging the enemy.
Mechanically they are all the same, but it feels differently in my head. 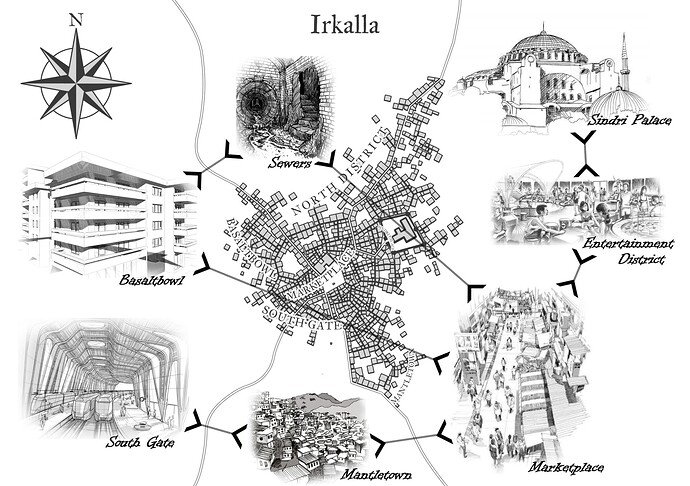 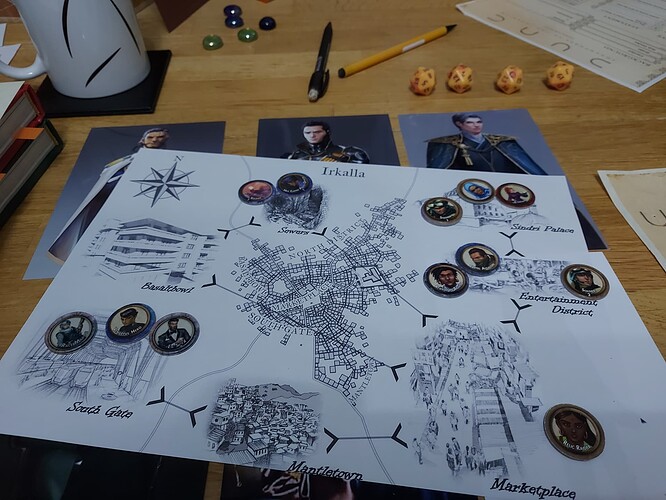 First, thank you very much for the answers.
I will try to explain my doubts one by one…
There is a player commander and an enemy commander. The player commander has troops as quality 1 assets and the enemy troops as quality 3 assets.
The player moves one of his assets normally, subtly or boldly (what ability does he use, move, discipline battle?)… Suppose he moves subtly and maintains the initiative… and he attacks an enemy asset… the Use battle in an opposed roll against the other commander?.. if so, and we imagine that he wins the opposed roll, eliminates the enemy asset even if it is quality 3?.. Quality is only used to generate more or less momentum in this case?
It also seemed to me that attacking and removing an asset appear as different things. In the rules to remove an asset you have to make a roll and have 2 successes but to remove a war asset you need an extended roll… is that right? Against whom?

Ah, I see what you mean.

Firstly, asset quality just gives them an advantage, but does not make them immune to lower level assets. You get a bonus to the results of an extended test with quality but a good or bad roll still applies.

When you move an asset into a zone and have another action (from keeping the initiative or just because you got there on your last move) you have (effectively) three options:
1 - Move to another zone to push forward to an objective.
2 - Try to destroy an asset in that zone
3 - If the zone is an objective, use the asset in that zone to take control and gain an advantage or (more usually) end the conflict by taking control of the zone and winning.

Tests are made between the commanders of each side as it is their tactical knowledge that is directing the battle. An asset not in communication with a commander might no longer be considered an asset under their control.

Yup, thats the one. Check out p168 in the corebook for more on Targeting Assets.
You might give a higher quality item a bonus to the difficulty to make more use of the quality.
But usually, if you throw a knife into a volcano, it doesn’t matter how well it was made, its still going to melt

Mmmm ok ok… Perfect I’ m ready for the war

. Máster of dune is increíble… I LOVE It… Thx again.