That is correct?
18 years after the Narendra Space Station became active?

BTW
The first act (ARROGANCE OF was already played THE PAST) and finished.
We all love the using of the Supporting Cast. Some players stay on board trying to restore the data and some others decided to go surface. The end foe this act was really intense.

Also, my wife (one of the playtester) made this layout with some pinterest pics, and also made some tokens. 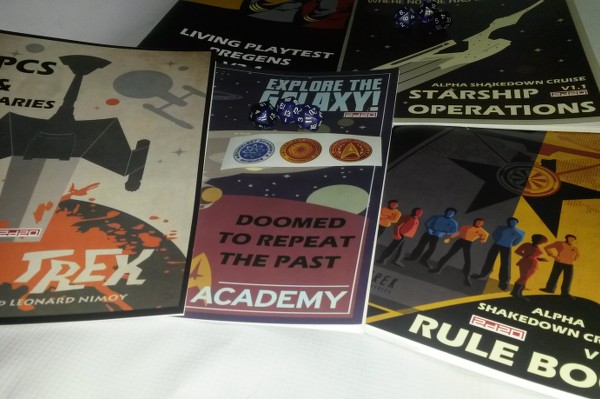 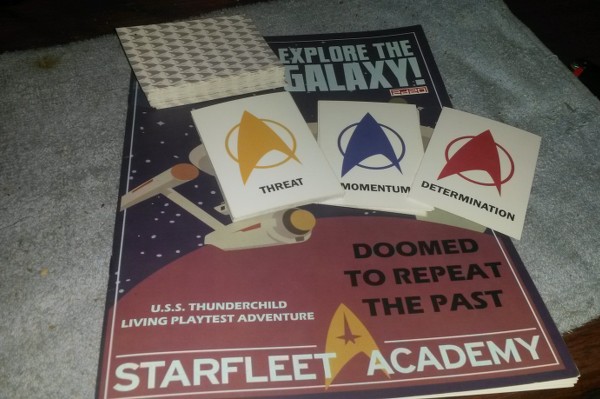 From México to boldly go where no man has gone before
http://divisionludica.blogspot.com/

@DivisionLudica Yes, Narendra came online in 2353 according to the guide.
Thunderchild, Venture and Bellerophon operate in 2371, at the same time as Season 3 of DS9, Season 1 of Voyager, and between TNG Season 7 Finale and Star Trek: Generations movie.

My players went through the Extended Task without any real problems, but since they reached the second breakthrough, they immediately knew that the RNA was Romulian, as one of the players commented on it, rather than possibility, as a fact.

The situation has become very tense, since one of the players has been suspicious of the Klingon all the time. In addition, the intrusion of agent Sigmund have not liked at all, to the degree they have questioned what is the position that she has in the federation and what is section 31, exactly?

Upon reaching the third breakthrough, when agent Sigmund is supposed to withdraw, the players have tried to stop her and the ship’s captain has ordered not to leave the ship’s port to the USS Cass.

As a side note, one of my players is playing with the Tellarite chief of engineering and is actually seeing little action or ways to act a lot during the adventure. Any recommendations to try to get her involved a bit?

The next report, coming soon

From México to boldly go where no man has gone before
http://divisionludica.blogspot.com/

@DivisionLudica I just ran Doomed to Repeat the Past, and in regards to the Tellarite Chief of Engineer there are a number of things you can do, depending on what the exact issue was.
In Starship Combat, the Chief is most useful for Power Management and Ship Repair, you can spend threat to ensure your enemy ships make breaches, so the Chief can fix them on their turn.
In Personal Combat, they should support other players with Assist, but that also goes for any character that is not good in personal combat.
In this mission in particular, the Chief Engineer could help a lot with analyzing the Data Core at the start. Later, they could have assisted with the cure creation in some way. I guess the simplest way would be that you make a reason why the chief engineer can assist and roll something. You should look at their character sheet and figure out what they are best at.

When I design missions I actually look at the character sheets and make or change specific Tasks depending on the characters beforehand. If you can find a way for a specific character to use or oppose their Value, the players will be a lot more engaged. You can just make a note on your mission sheet where you think a particular player can do something because of their Traits, Values and how their Talents can assist them in that Task.
I know it is more prep work, but the more you engage your players with their Traits, Values and Talents, the more they will feel useful to think of ways to use them on their own. And yeah, if you a the same group of Characters every game, make sure you add a diverse group of Tasks that allow everyone to make a Task they would be best at in the mission at least a couple of times.

In regards to Section 31, if the players are unfamiliar Star Trek to that detail, you will need to look up and make sure it can be easily explained. “You have heard whispers in Starfleet bars about a mysterious Section 31 that does not obey Federation law, but Starfleet Command turns a blind eye since they get the job done.”
A great resource is Memory Alpha. Section 31 on Memory Alpha

Thanks for the feedback! Where we have room and time, I’ll endeavor to encourage the adventure writers to include tips on how to involve the senior staff in scenes where it might not look like they have anything meaningful to contribute.

Ran the adventure last week, Think the rules additions helped and game play on the personal level played out more smoothly. Could use some more fleshed out examples on involving the ship in tasks and in Starship combat.

Unfortunately, I have a small playtest group and are all playing bridge officers, so no one beamed down to the planet, Although thier sense of paranoia was heightened regarding Cmdr Sigmund.

hope that when the game is released, that there will be a rules summery sheet released like that for the playtest rules, a real help.
Wondering when the portal to make our reports will be added to the website.