I am running a STA game and one of the sessions I am planning on having the players isolated in a subterranean arctic environment while exploring an archaeological shipwreck hidden thousands of years ago. They have dealt with various enemies in the past, but this session I am mainly wanting them to face the environment rather than thinking enemies.

I am wondering is what sort of challenges I can throw at them.
Currently I have:

What other ideas have people got that I could use?

If you want to make winding tunnels a problem, you need to have something that interferes with sensors (tricorders) and communications. Otherwise even something as simple as bringing a score of spare combadges to drop as breadcrumb trails would make it very easy to keep track of relative positioning.

Actually, IME, the need to keep the crew from fully utilizing their technology is pretty much always going to come up in Star Trek, so this is just general advice.

You could have the crew need to excavate the shipwreck (with shipboard phasers). Doing so could require some engineering challenges to ensure that the shipwreck and the tunnels remain safe. Also, the effort could accidentally thaw out something that makes the environment far more challenging (e.g., hallucinogenic chemicals/spores).

I think there plenty of difficult challenges in an subterranean arctic environment.

Hope this wasn’t to long winded, coming up with these ideas is pretty fun. 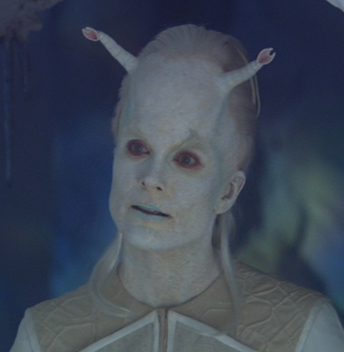 The Aenar were a humanoid species native to the Northern Wastes of Andoria, and a subspecies of the Andorians. Their population during the mid-22nd century consisted of only a few thousand. 1 Physiology 2 Society 3 History 4 People 5 Appendices 5.1...

-An other team (scanvangers) knows about the ship and wants it cargo so it becomes a race against the clock.
-It is an old federation ship that carries hidden illegal experimental technology. If others would find out it would be harmfull for the federation. Only the highest memeber of the crew (one player) may enter and retrive it. The others are always gessing what it contained.
-Before he died the survivor(s) of the ship has boby trapped its content.
-The planet is habited by a primitive species, so the prime directive applies.
-The ship leaks dangerous liquid or radiation. If it continous it will leak into a mayor underwater river poisoning a large area of the planet. So they have a limited time to close the leaks.
-The ships has become the home of a agressieve artic animal.
-Cave inn (huge and no transporter can get a lock because of mineral deposites), and they are bloccked so they must find a way out (may be even take a short dive is freesing water.
-Weak ice floor and possible collapse of the floor.
-Ice is very slippery.
-Climbing an ice cavern
-I always use films or other series as inspiration. These are the films I would use:
Sanctum not with ice but can easely be adapted (I used it for a similar mission (Sanctum - Trailer - YouTube).
Mandalorian Chapter 10: The Passenger (Chapter 10 - The Passenger - The Mandalorian Season 2 Episode 2 - YouTube).
Vertical limit (Vertical Limit (2000) Trailer #1 | Movieclips Classic Trailers - YouTube)
Cliffhanger (CLIFFHANGER - Official Trailer 4K Restoration - YouTube)
The Day After Tomorrow (The Day After Tomorrow - Official® Trailer [HD] - YouTube)
The Thing (The Thing (1982) Trailer - YouTube)
Alien vs Predator (AVP: Alien vs. Predator (2004) Official Trailer #1 - Alien Movie HD - YouTube)

There are a lot of good ideas for me to draw from here. As well as a few pitfalls that I need to watch out for.

if possible, a game resume once done ?

northern Lights can be used to stop communications
Also the away team can be sent at the surface and then the ship is needed elsewhere, but don’t worry they will come back in a week (of course the delay can be extended with Threat, the ship mission was more difficult than expected)

Think of verticals. Shafts that open beneath the players or they’re walking on the frozen ceilings of big caverns that are juuust thick enough to walk on, cracking with a Threat or two…

Also, in case the winding tunnels were crafted by flowing water, there might be passages too small to even crawl through, making it necessary to hack/break/melt a way – without damaging the structure of the glacier, risking it to collapse over the heads or your PCs.

Well I ran the session for the group this evening.

It began with them transporting down into a nearby ice cavern before heading though the tunnels under the arctic ice sheet to get to where the sensors had picked up something. They were given the option of two main tunnels, one towards the anomaly and one away from it. They chose towards first.
They had to navigate through several collapsed passages, which at one point meant the party was separated as one of them rolled a complication which brought down some more of the ceiling behind her.

Once they met back up they had one more ice collapse to get through to reach where an ancient ship had been hidden thousands of year previously.
In breaking through that they disturbed a series of stalactites above them requiring some fancy footwork to avoid. Deciding to deal with the remaining stalactites by phasing them off the ceiling the party made it’s way to the ship and found an access hatch that wasn’t covered in half a foot of ice.
While hacking through the access pad their earlier phasing came back to haunt them as the pocket of highly pressurised water in a pocket above the cavern began to seep through.
Thus it became a race against time (extended task) to get through the hatch before they were deluged in sub-zero water.
They succeeded, but not before one of them was drenched and had to ditch his cold weather gear once inside the ship.

Inside the ship they had to deal with a few ancient booby traps. Thankfully they were designed to work against robotic enemies (one side of a historic civil war they had encountered before) so after the security officer took a nasty shock they were able to avoid them fairly easily.

At the Bridge they had to have an argument with a stubborn computer system that didn’t recognise them as they weren’t the correct race and didn’t have any Command Authority tokens.
Eventually they persuaded it to give access and it proceeded to start powering up the reactors. Thousands of years of no maintenance meant that it hit various issues and advised that it needed to vent the main reactor to prevent major damage. Which would have been a problem on an uninhabited planet, but as the planet was now populated by the regressed descendants of the original crew it would have been a major catastrophe.
Some fast engineering work later they were able to shut down the reactor without too many issues. It wasn’t going to restart without a major overhaul, but that was a problem for a future team.

Having stabilised the ship and downloaded it’s databanks they went back to check out the other passage from the start. Finding a collapsed tunnel and the remains of the former captain. Along with his Command Authority token…

Overall the group had fun and overcame the obstacles I threw at them. It made for a change to not have an ‘enemy’ to go against. Even the computer was more stubborn than antagonistic.
The data they downloaded gave them the target for their next mission, which will be more of a trace against an opposing force to get the objective before them.

Thanks to everyone who gave me ideas and suggestions. It definitely helped me create and refine the session.

) adventure! Glad it worked out. Only question I have: what happened to the cold water shower that chased them into the ship? How did they get off dry?

The character had a couple of actions at +1 difficulty until they deicided to strip off their cold weather gear at which point I waived it and it sort of got dropped.

For the cold weather gear we did get a good laugh out of the Caitian who had to have a tail warmer as part of her gear. It was essentially a glorified sock that kept being stood on every time someone rolled a 20.