Q'plah! A new addition to STA is coming

The print titles are expected to ship in autumn/Fall but both print pre-orders will receive the PDF preview right away. Purchasers of the PDF on Modiphius.net will receive as special code which can be redeemed against any future print purchase and buyers on DriveThruRPG can contact support@modiphius.net to take advantage of a similar offer. 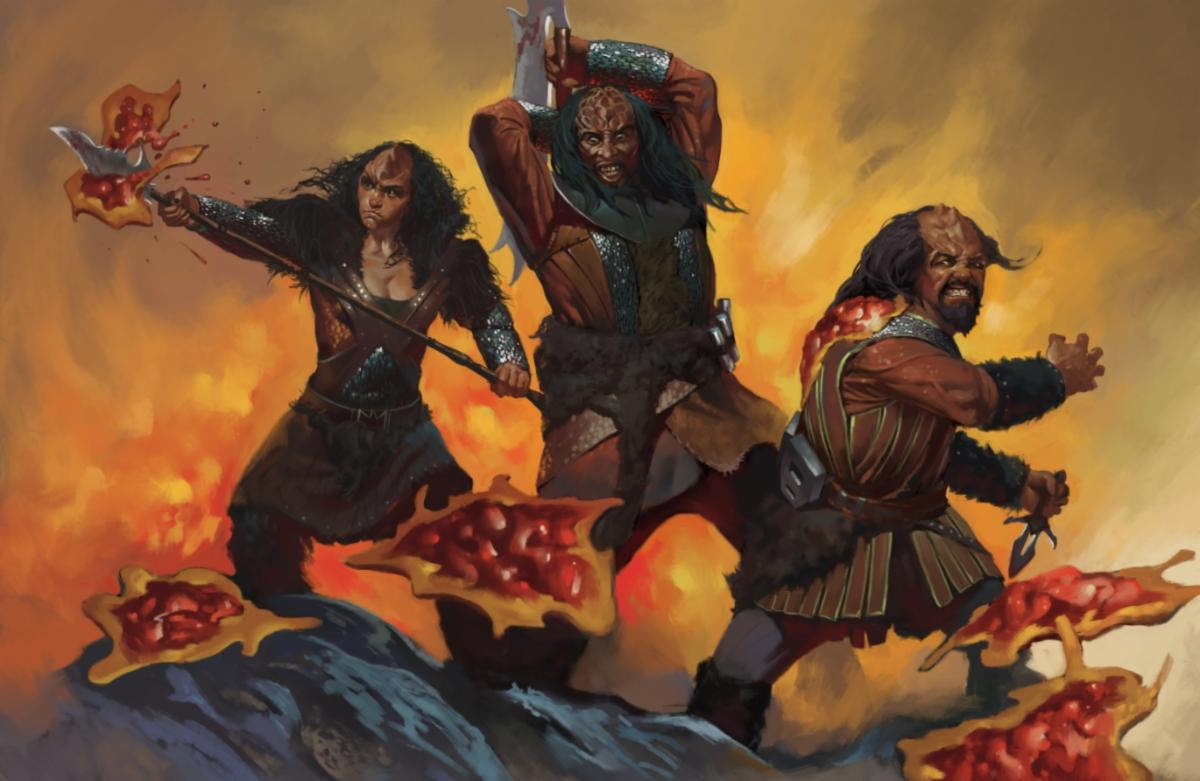 GLORY TO YOU AND YOUR HOUSE!

“WE DO NOT FIGHT MERELY TO SPILL BLOOD, BUT TO ENRICH THE SPIRIT.” – EMPEROR KAHLESS II

THE KLINGON EMPIRE core rulebook for the Star Trek Adventures Roleplaying Game takes you to the final frontier of the Galaxy, where new worlds and new civilizations await bold Klingon warriors hungry for glory and honor. Your duties may take you to the edges of known space, to Klingon colonies in need, to the borders of neighboring galactic powers, or into the eye of interstellar phenomena. Your warship and crew represent the best-trained and honorable of Klingon warriors, and your cunning and abilities are needed now more than ever.

A new threat looms from across the Gamma Quadrant, representing a worthy opponent for the worlds of the Alpha and Beta Quadrants. Tensions are high and it remains to be seen how the Klingon Empire will get involved. It is a volatile time for the Empire as her brave warriors and bold crews ready for battle against whatever foes present themselves. 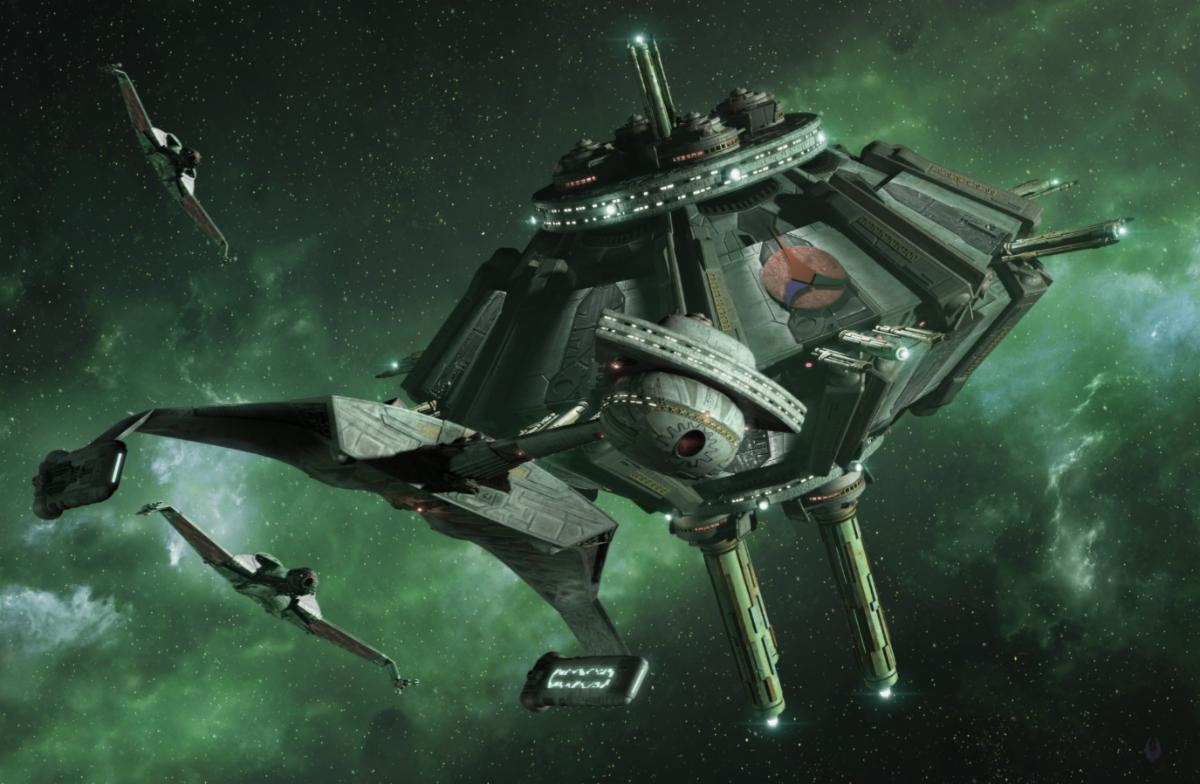 OMG. I so want this. Since it’s a Klingon version of the original core book, will it have Klingon space frames?

Layout and style are truly amazing! Text is very clear, diagrams are easy to read and very nice.
I have found some tlhIngan Hol typos though

I am really waiting for Collector’s Edition, because I really love what you did here.

Since it’s a Klingon version of the original core book, will it have Klingon space frames?

According to this link that I stole from this post of @Modiphius-Nathan, there will be “more than a dozen Klingon starships to choose from”.

I was thinking, when I saw the mail-out about the Day of Honour thing, “it’s too bad that they don’t have a Klingon module or, maybe, a whole supplement to announce!” Congrats on this!

Sorry: the DriveThruRPG product description is confusing me. I guess I’m wrestling with what “preview” means. Is there a full 390-page PDF available now, with an expectation of a later update with last-minute copy changes? Or am I getting a smaller product with the full 390 pages coming later?

It’s an early production book, far from actually finished. When the final comes out it will have all the pictures and everything properly formatted.

Is there a point to sending you list of typos in text?

Why isn’t there a news story about this listed on the website? Really want to forward this to some of my play groups, but I can’t find an online copy

There’s an email from the newsletter and there’s the startrek.com news I linked earlier.

I plan to order the book next week.

Are the any plans dice with Klingon symbol.

My only question is: Why an entire core rulebook?

Do the rules work differently for Klingons?

If the rule mechanics are the same, why not a sourcebook that simply explains how the rules apply to Klingons? Why waste space with rule mechanics that are covered elsewhere?

Cool. Thanks for clarifying. I ended up buying it directly from the Modiphius site.

I haven’t read it in full, yet, but I can already see some nice rewrites of the core rules. Frex, the combat flow chart on page 169 is a nice, clear way of communicating the combat rules.

A few quick Q&As for you:

Lots of Klingon spaceframes in the book, including some original to the book.

Any typos, feel free to email them to me at jim at modiphius.com. I have one final edit pass to do on the print version before we send it off. We’re adding 16 pages and more art pieces to the book, which will shift some of the layout. Index will be updated, and I’ve already found and fixed some typos that snuck in.

Why an entire core rulebook? I wrote a sidebar about that!

This was an opportunity to present another path into the game and also to revise or refresh the rules presentation since we’ve collectively had 3-4 years with the system and heard a lot of fan feedback on what was working and what was confusing. Tidied it up a bit.

Someday I’d like to do a similar refresh on the Starfleet core, but that’s TBD.

Sorry: the DriveThruRPG product description is confusing me. I guess I’m wrestling with what “preview” means. Is there a full 390-page PDF available now, with an expectation of a later update with last-minute copy changes? Or am I getting a smaller product with the full 390 pages coming later?

The final version of the book will be 400 pages in print and PDF. The PDF you get when pre-ordering is a 384-page preview.

What actually is the difference between the collector’s edition and the ‘regular’ one? Just the cover? Or also anything else?

So I just picked up the PDF and I spotted a continuality error in the text, namely the fluff for the Vor’cha states that “Chancellor K’mpec would die
from a cowardly assassination via poison only ten standard
days before the launch of his new flagship in 2367. The
second vessel built, I.K.S. K’mpec, was named after the late
Chancellor by then-Chancellor Gowron and gifted to House
K’mpec to honor their namesake’s sacrifice.”

Problem is we see K’mpec die in ST:TNG’s episode Reunion (season 4 episode 7)
when he arrives to meet with Picard on a Vor’cha. (Gowron’s flagship during the civil war is also identified as the Bortas but it’s possiable the Klingon’s don’t follow the convention of naming a class after the first ship in the class, not every real life navy did so) I’d reccomend fixing this to “died ten days after the launch of his flagship”