So my local gaming convention is going to happen this year. Dragonflight 41 has been rescheduled for Halloween weekend

It has been a while since I was able to attend a gaming con and had planed to do so last year but my hopes were dashed by the Covid. Dragonflight used to happen every year in August and I am actually really happy that it has shifted to October. My favorite RPG genre to run or play is Horror. So I already have three scenarios that I had already planned to run. Warparty (Down Darker Trails CoC 7th, 1865) , The Island (Fear Itself, GUMSHOE, 1970’s) and Terror on the DEW Line (Delta Green, FoDG, 1960’s).

But I really want to run a Star Trek horror game. I have all the various books including the Klingon ones. I have been batting around ideas, including some Lovecraftian horror stumbled upon by the crew. But nothing is gelling.

So here I am. Toss me some ideas so I can break my creative block.

Three words: Redjac is back!

I appreciate the three words, but without a context they don’t really mean anything to me

Update: OK got it. I’ll need to reread the Radjac TOS episode as well as watch it. The comic is from the late 80’s and I don’t see it available anywhere, even as an e-copy.

The crew intercepts a radio signal from an earth ship which has been travelling through space for hundreds of years. They trace it back to a M Class planet. Once they beam down they find a village nestled in the shadow of an ancient castle from where the signal originates. The villagers are terrified of the castles rulers who regularly take people to their castle never to be seen again. It turns out that the three rulers are in fact vampires and the crew of an ancient earth ship that crashed on the planet centuries ago. They discovered the lair of the last of the great vampires - huge creatures who were hunted to extinction though this last one escaped and built the castle on top to hide its presence. Gravely wounded it has been lying dormant rebuilding its strength until it can once again leave the planet to terrorise the stars. The three lords serve it having been transformed long ago into vampires. The crew discover the missing villagers are food for the great vampire and the PCs ship and crew are next! It turns out the great vampire can only truly be destroyed it it’s heart is pierced, perhaps a starship bow could be converted into a huge stake? The great vampire is a massive humanoid bat-like creature and the vampire lords are creepy albino humanoids who cast no shadows, possess mesmerising gazes and are highly resistant to phaser fire, though perhaps their hearts too can be pierced with a suitable weapon such as a Bat’Leth?

Some further detail: the crew find that any technology is forbidden by the three lords and they use transformed villagers to guard their castle. Several villagers have decided to resist their masters and have secretly formed a resistance group whom the crew encounter. In the depths of the castle they discover an ancient earth ship: perhaps a space shuttle? And the logs which detail their crash and subsequent discovery of the great vampire.

Might I direct you to two TNG Episodes that came to my mind? Have a re-watch of TNG 4x17 “Night Terrors” and TNG 07x14 “Sub Rosa”, maybe this will spark some imagination.

And, of course, there’s always the Halloween Party on the Holodeck that goes rogue…

All great suggestions and I thank you.
They have also inspired an idea.

Since it is a Con one shot I am thinking of running a Klingon game based on a small Klingon scout (most likely a B’rel since I have deck plans for them) that comes across a drifting Federation starship. A smaller one since I want to keep the scenario scale small and claustrophobic. Most likely in a gaseous region that interferes with scanners and sensors.

Being a con game and Halloween I may go with the slasher flick style action because…well… KLINGONS!

Jason X’ish? Not a bad thought, but we are talking Klingons here. They would eat old Jason right up.

I am thinking more of something similar to Aliens, maybe some Daughters of Atlach-Nacha or Broodlings of Eihort. 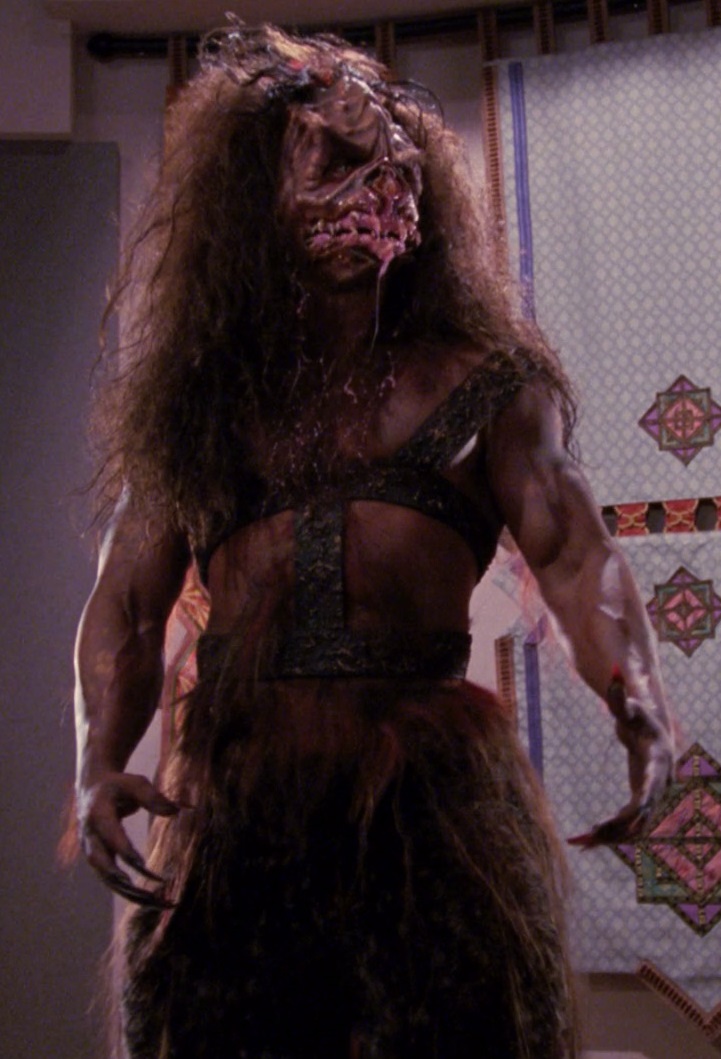 Fek'lhr was a figure in Klingon mythology, a humanoid beast which resembled a feral, monstrous Klingon, who was the Guardian of Gre'thor. In 2367, a con artist claiming herself to be Ardra briefly appeared as Fek'lhr, using holographic technology....

In Klingon mythology, the Kos'Karii were pale, serpent-like creatures which inhabited the blood-red waters crossed by the Barge of the Dead on its way to Gre'thor. They attempted to lure dishonored souls to them with voices of friends and loved ones,...

Thank you very much. I have just decided on the broad outline of a plot.

The players are Klingons aboard a heavily damaged B’rel class BoP that is forcibly dropped out of warp in a small star system with a very dim star and only a couple dead planets. The final drop from warp has burned out the BoP’s dilithium crystals, which will strand the ship by making their warp drive inoperative. An unknown emission from he star has completely blocked any possibility of establishing any kind of contact with the Klingon High Command, or pretty much anyone.

But look! In low orbit of one of the planets is a Federation starship. It does not respond to any hails, whether because of the interference or having no one aboard is unknown. But it is a starship and may have what is needed to restore the BoP.

What they don’t know is that an entity had managed to escape being stranded on the planet below by boarding one of the science shuttles returning from a planetary survey. The entity has the ability to pull subconscious thoughts from victims and then plant images deep into their minds. It then feeds by absorbing powerful emotions, especially terror. Very close to the entity in the TOS episode Day of the Dove. Once a victims mind breaks the entity can control them similar to a living zombie. The Federation crew has been long rendered into near mindless shadows of themselves and are completely under the control of the entity.

And along comes the Klingons. Into a dark and shadowed ship who’s walls slowly turn into rocky caves that team with Kos’Karii and the dreaded Fek’lhr.

Or something along those lines…

Any terror dream of a klingon should include tribbles and flat heads, maybe a mariage with a very strong but very ugly klingon woman. In my mind it also include klingon opera but for a klingon I would include Luis Mariano or Geoges Guétary songs (André Dassary 's Ramuncho is not for th weak minds) Ramuntcho : André Dassary.. - YouTube

Neat ideas, but I am leaning towards dark horror as opposed to comedic horror.

Have a look at the (free) STA Mission Briefs Pack 003, in particular the Brief “Unseen”. This should provide an ample supply of horror, especially for Klingons.