Breaking a model on purpose

On the surface, this probably sounds counterproductive, but bear with me.

With the orders I place, I ended up with a LOT of Deathclaw models. I have homes for four of them, but that still leaves me with five of my own.

Those five models, I want to paint up differently in order to create a bit of diversity among the models. I’ll also be doing some other things to try distinguishing them from the others, like adding bits to their bases and such.

One thing I have been thinking about though is doing a broken horn on one of the Deathclaws. This brings up the question; how would I do such a thing while 1. Not accidentally doing damage to the model beyond the horn breakage. and 2. How to make the break look natural.

I’ve been thinking about sitting a Deathclaw head in the freezer over night and trying to snap the horn while the plastic is cold and brittle, but I’d really like some feedback from more experienced modlers. Has anyone else done something like this? Or have advice on a better way of doing it?

I would not actually break it, the break will not be something you can control and may do damage in other locations. I suggest using a jeweler saw and cut away the section of horn you would like to break. Then using a 2 part ribbon epoxy, green stuff or something like that, build up the area to look like it has been broken. I would suggest using references of in video game broken horn and real horns that are broken.

I have a saw for cutting metal and plastic in my hobby kit. Maybe I’ll try cutting it and see how it looks, then try the epoxy trick like you suggest. 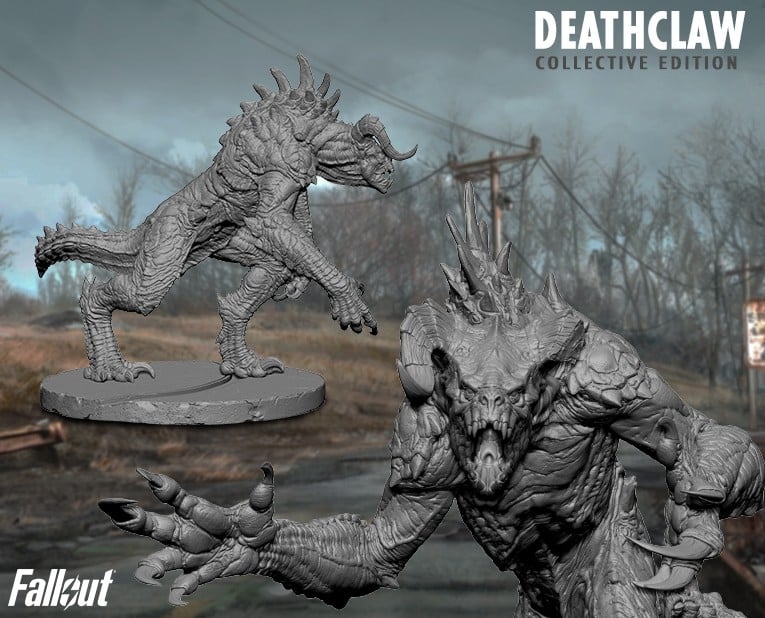 If I make the cut just a little sloppy, I think I can capture a fairly similar effect without too much trouble. Probably make the break further out for mine, maybe just a couple of segments coming off instead of most of it like that.

I’d suggest cutting it a bit longer than you want and carving the detail into it. The alternative would be to cut shorter than you want and use green stuff to sculpt up to what you want. I have no use for the PVC minis, so I’m going to be cutting hands away from guns and what-not. Let us know how you go, though.

While not exactly the same, I applied the cut-off-then-remodel technique when making trees:

It wasn’t difficult at all and I am quite happy with the result. If I were doing a broken off horn, I would to the same. It’s easier to change a modeling job you’re unhappy with than a cut down that you are unhappy with.

I’m figuring that the horns are what, 6-7 segments long? With the end one making up about a third of the length. My plan is to remove the first segment and see how it turns out. I mess something up and I can take another little segment. I figure I have about three tries before it starts getting shorter than I’d like it to be.

if you feel confident with green stuff you could always build up and extend the horns to create an alpha deathclaw, or swoop them down to create a matriarch to lead your brood of deathclaws

My problem is my complete lack of artistic talent. I can barely draw a stick figure, let alone sculpt something.

I think what I’m going to do is just take my hobby saw and cut just the first segment off to see how it looks if I try to make the cut look a little rough. Once I’m that far, it will either look similar to the picture above or I have a couple more segments to experiment with. lol

if your not to confident cutting into the proper model just yet have a play with one of the bits of resin from the sprue to get a handle on how it will work, if you are cutting resin with a saw or anything that creates a lot of dust were a dust mask or respirator you don’t want to be inhaling resin dust it can cause some nasty lung problems

I’ve cut a few models related to Warhammer Fantasy before, it’s just been a while. I’m not too worried about the cutting.

You want a set of clippers from a company like gw or army painter that will let you remove precise amounts of the horn.

Then a small file to clean up with.